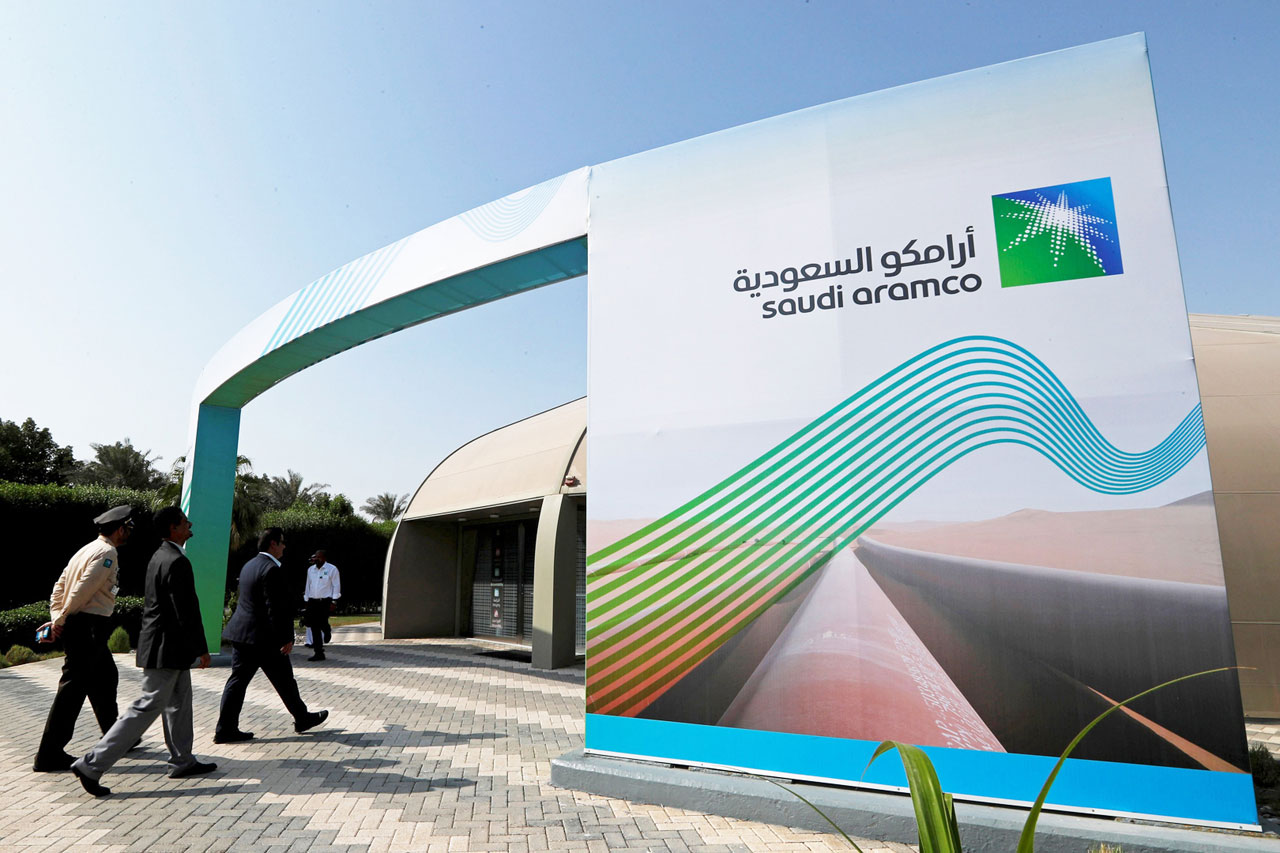 The logo of Aramco is seen as security personnel walk before the start of a press conference by Aramco at the Plaza Conference Center in Dhahran, Saudi Arabia. — Reuters photo

RIYADH: Saudi Aramco’s much-anticipated initial public offering will begin on Nov 17, the company’s prospectus said, without revealing the size of the stake sale or the pricing range.

The 658-page document, released just before midnight Saturday, said the final share price will be determined on

Dec 5 — a day after the subscriptions close — in what is expected to be the world’s biggest IPO.

After years of delays and false starts, Aramco officials last week announced a share sale on the Riyadh stock exchange for the world’s most profitable company, which pumps 10 per cent of the world’s oil.

The prospectus said the state giant will sell up to 0.5 per cent of its shares to individual investors while it has still not decided on the per centage for larger institutional investors.

“The targeted per centage of offer shares allocable to individual investors will be up to 0.5 per cent of the shares,” the prospectus said.

The document also highlighted risks including the potential for terrorist attacks, the possibility of antitrust legislation and climate change concerns that could reduce global demand for hydrocarbons.

But investors in Saudi Arabia appear to be salivating at the prospect of owning a piece of the company — seen as the kingdom’s crown jewel — in the IPO.

It would be the world’s biggest if it eclipses Chinese retail giant Alibaba’s US$25 billion listing in 2014.

The prospectus named a host of international banking giants — from Citibank to Credit Suisse and HSBC — that it has hired as financial advisors and bookrunners.

Saudi Arabia is pulling out all the stops to ensure the success of the IPO, a cornerstone of Prince Mohammed’s ambitious plans to steer the economy away from oil by pumping tens of billions of dollars into a host of megaprojects and non-energy industries.

The government has reportedly pressed wealthy Saudi business families and institutions to invest in the IPO, and many nationalists have labelled it a patriotic duty.

The firm has said there were no current plans for an international stock sale, indicating that the long-discussed goal for a second offering on a foreign bourse had been put aside.

Aramco had initially been expected to sell a total of five per cent on two exchanges, with a first listing of two per cent on the Tadawul Saudi bourse followed by a three per cent listing on an overseas exchange.

It is unclear whether Aramco will get the US$2 trillion valuation Prince Mohammed had hoped for, with investment research firm Bernstein estimating it could fall between US$1.2 and US$1.5 trillion.

There are also reports the firm is struggling to get institutional investors on board amid a bearish outlook for the energy sector and questions over the company’s transparency and governance.

Norway’s sovereign wealth fund, the largest in the world, has said it does not plan to invest in Aramco, a Norwegian official told AFP. Investors are also concerned about geopolitical risks weighing on the stock.

The news of the listing comes just weeks after crippling attacks on the heart of Aramco’s facilities briefly halved its output amid a spike in tensions with Iran.

But China, the world’s top oil importer, may commit as much as US$10 billion through sovereign wealth funds and other state-owned enterprises, Bloomberg News reported.

The company, a cash cow that catapulted the kingdom to become the Arab world’s biggest economy, also holds enormous appeal for retail investors.

Many Saudis appear to be tapping lenders and selling personal assets to raise money to invest in the share sale.

Aramco last year posted US$111.1 billion in net profit. In the first nine months of this year, its net profit dropped 18 per cent to US$68.2 billion. — AFP