Wednesday, February 19
You are at:Home»News»We’ve known Violet since her teens, JC Fong reveals after DAP rep runs his wife down (Video) 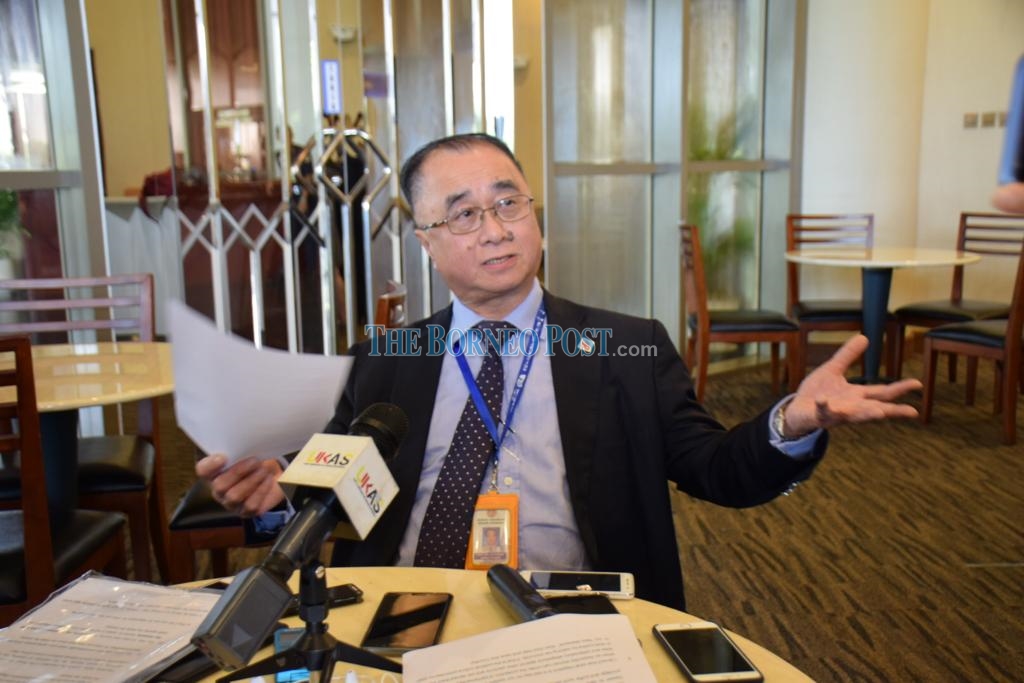 JC Fong gestures while speaking to the press at the State Legislative Assembly building after he waited in vain for Yong to show. Photo by Roystein Emmor

KUCHING: Dato Sri JC Fong has called into question the character of Pending assemblywoman Violet Yong after she claimed that she had been confronted and harassed by his wife, Datin Sri Annie Fong, in the State Legislative Assembly building last week.

The state legal counsel told a press conference that his wife was by no means a stranger to Yong and that they had known each other since she was in her teens as Yong’s late mother, Ong Teck Eng, was his staff for almost two decades when he was in private practice.

“My wife and I first saw Violet when she was a teenager,” Fong said, adding that he recalled acting as a ‘referee’ to support the application for Yayasan Sarawak student loan for either Violet or her sister at their mother’s request.

Therefore, Fong said his wife was not someone who is a total stranger to Yong and she must have immediately recognised her when she wanted to have a conversation with her outside the DUN chamber.

“It is therefore most surprising that YB Violet should complain as if my wife, who is a 69-year-old grandma, was an alarming security risk to her.

“Such was the magnitude of the perceived risk presented by my wife on the eighth floor of the DUN building, that she had to introduce a motion in the Dewan and give such a hysterical speech as shown in the video viraled by the DAP that honestly I thought the ‘pom pom girl’ from Pending was, like some character mentioned in the Bible, ‘possessed by evil spirit,” he said.

“In any event, what my wife did in trying to have a conversation with that pom pom girl from Pending was in defence of her family members who have been wronged and insulted.

“That is expected of any good mother. I am sure Violet’s own mother would have done likewise in similar circumstances,” said Fong, referring to Yong’s description as herself as ‘pom pom girl’.

Yong had claimed during the DUN sitting that she was confronted by Annie last Monday, who interrogated her about her 2020 State Budget debate speech which mentioned her daughter.

“Because of that, I feel sad, I feel distressed and I could not sleep last night. I feel that I have been emotionally blackmailed and manipulated,” she told reporters on the sidelines of the sitting, urging DUN to improve its security.

Claiming that Yong was “very obsessed” with his wife, Fong could see no reason why Yong would react the way she did when his wife approached her.

He said his wife was given normal security clearance to enter the DUN and after a meeting with some government officials, was allowed to sit in the area reserved for guests in the august House.

“So you can see what sort of character she (Yong) has. We knew each other when she was a teenager and yet she thinks my wife is a security risk… she just approached her and say ‘can we talk’ but she turned this around as if my wife is going to swallow her or something.

“How can we have people of this type of calibre representing us?” asked Fong.

Fong had invited Yong to the press conference to the DUN cafeteria at 3pm this afternoon to challenge her to waive her parliamentary immunity and repeat allegations she had made against him during the sitting last week.

Yong did not turn up.