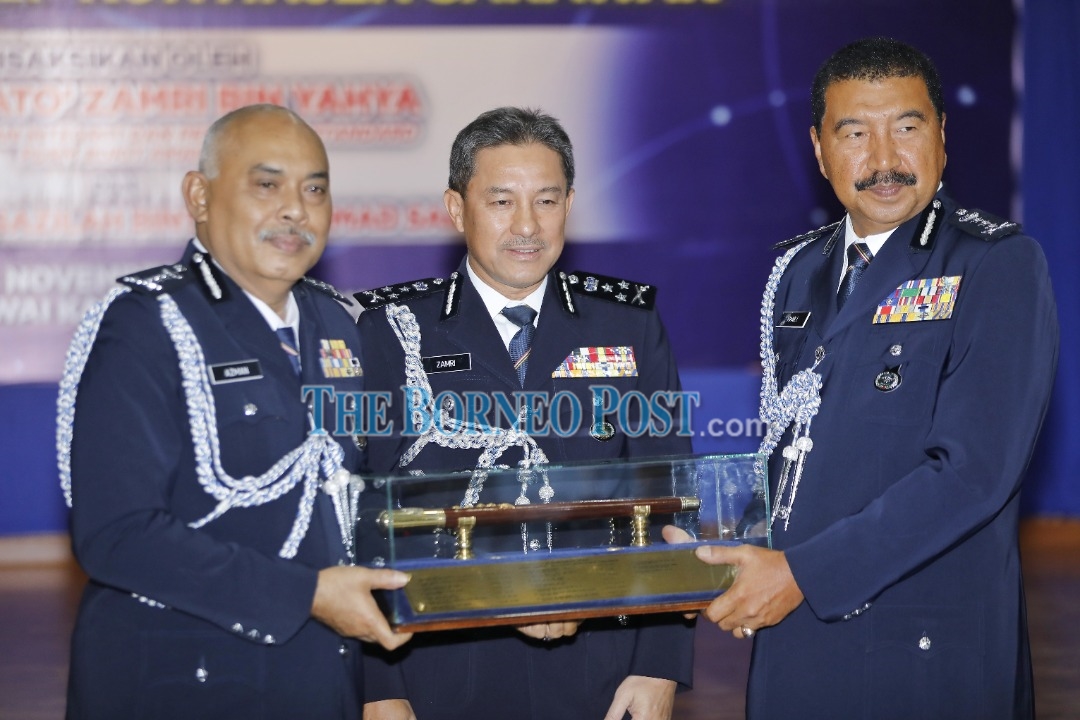 Azman (let) symbolically hands over his duties to the newly-appointed Sarawak Police Commissioner Ramli, witnessed by Zamri. – Photo by Chimon Upon

Ramli, who would be 25th Sarawak Police Commissioner, said he would continue to ensure that the state remains peaceful in time to come.

“The things that will continue to be emphasised in Sarawak police contingent will be centred around service delivery and integrity,” said Ramli at a press conference after the handling-over-of-duties ceremony.

In view of the coming state election and relocation of Indonesia’s new capital to Kalimantan, Ramli said he would ensure the state police were well-prepared to perform their role in making sure ensure these events could be carried out without any untoward incidence.

He said preservation of the state’s flora and fauna resources would also be one of the key focuses under him.

Ramli was previously the Sabah Police Commissioner before being promoted to become the Inspector-General of Police Secretariat (Research and Development) chief in Bukit Aman.

Meanwhile, in his departing speech, Azman, who has been appointed to succeed Ramli, said he was satisfied with the performance of the state police contingent and that their overall mission to safeguard public order and safety in the state has been achieved.

“I am pleased to note that the key performance index set by Royal Malaysia Police for the Sarawak contingent had been met and I appeal for all police personnel in Sarawak to continue give their utmost commitment in serving their duty,” said Azman.

Azman shared that one of the challenges faced by the state police force was that some police personnel might forget the existing rules and regulations guiding them, which would indirectly affect the police force’s image in the eyes of the public.

As a result, he said the Royal Malaysia Police headquarters in Bukit Aman had introduced new regulations and policies to produce a more effective and higher quality police force to carry out the mandate entrusted by the public.

“I hope that the Sarawak police contingent can continue to carry out their duty to the society wholeheartedly. Police need to live up to the public’s expectations in enforcing the laws and serving justice to the public. It’s that simple,” said Azman.

Azman said the Sarawak police contingent would be in good hands under Ramli’s leadership as he has been equipped with the wide-ranging experience and calibre to bring the state police force to greater heights.