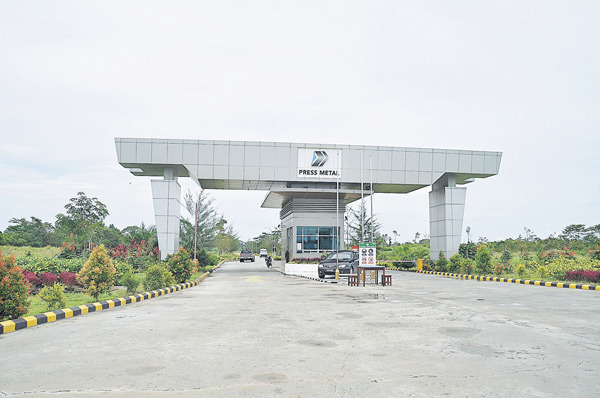 In a filing on Bursa Malaysia, Press Metal announced that the group entered into a memorandum of understanding (MoU) with PT BAI and its direct and indirect shareholders, which are Shandong Nanshan Aluminium Co Ltd (Nanshan Aluminium), Redstone Alumina International Pte Ltd (Redstone), and PT Mahkota Karya Utama (PT MKU).

“The MoU sets out the principles for the parties to further discuss the proposed capital injection by Press Metal into PT BAI via a subscription of 25 per cent of PT BAI shares by Press Metal,” the filing read.

The 25 per cent equity interest in PT BAI is for a total cash consideration of US$80.23 million (equivalent to approximately RM331.36 million).

“Typically, alumina input makes up 35 to 40 per cent of Press Metal’s production cost. Upon commissioning in the second half of 2020 (2H20), we understand that Press Metal may source as much as one million tonnes of alumina from PT BAI.

“This will make up close to half of its annual requirement of 2.06 million tonnes. Apart from enhanced security of feedstock supply, we understand that the new arrangement could also result in better alumina pricing, resulting in improved margins.”

According to AmInvestment Bank, the investment will increase Press Metal’s net debt and gearing of RM3.4 billion and 0.84-fold at present to RM3.73 billion and 0.92-fold respectively.

It noted that these are still relatively manageable given the strong cash generative nature of Press Metal’s core business.

Looking ahead, AmInvestment Bank reduced its financial year 2020 and 2021 (FY20 and FY21F) net profit forecasts by eight per cent and four per cent respectively. The research firm’s core net profit estimates for FY20F and FY21F are now at RM658.2 million and RM805.1 million, respectively.

“Our earnings downgrade is to reflect higher interest expense from the investment. We are also taking the opportunity to factor in the proposed one per cent state sales tax on the exports of aluminium products effective January 1, 2020.”

Meanwhile, AmInvestment Bank maintained its assumption on aluminium average selling price (ASP) of US$1,800-US$2,000 per tonne for FY19-21F on the back of higher projected production growth of six-seven per cent versus projected consumption growth of five per cent in China in 2019.

The research firm also retained its assumption on the alumina price of US$390 to US$430 per tonne backed by the prevailing supply shortage in global alumina production.

“While we are positive on the latest development, we remain cautious on Press Metal’s overall outlook due to the weak prospects for aluminium price and the high cost of input alumina, resulting in margin squeeze and the company’s valuations which are at a premium versus its global peers. This means the upside to its share price may be capped.

“However, this could be mitigated by Press Metal’s recent signing of a 15-year power purchase agreement (PPA) with Sarawak Energy Bhd for the supply of 500 megawatts (MW) of electricity, enabling it to power an additional annual aluminium smelting capacity of 320,000 tonnes. This will boost its overall smelting capacity by 42 per cent to 1.08 million tonnes by 2021 from 760,000 tonnes currently.”