Tuesday, September 22
You are at:Home»News»Fatimah: Sarawak not against raising minimum marriage age 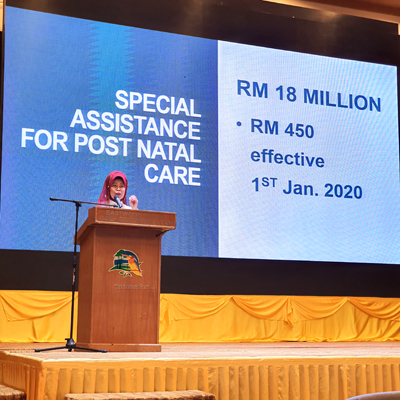 Fatimah explains to the audience one of the state government’s special assistance for all Sarawakians in her keynote address yesterday.

MIRI: Sarawak has never rejected the proposal to raise the minimum marriage age to 18 years to address the problem of adolescent marriage.

Saying that reports to the contrary were inaccurate, Minister of Welfare, Community Wellbeing, Women, Family and Childhood Development Dato Sri Fatimah Abdullah pointed out that the state government supported the law but it had to be refined.

“Sarawak has three marital legal systems; civil, syaria and customary laws, with two of these laws setting the minimum age of marriage to 18 years,” she said after the launch of the Parti Pesaka Bumiputera Bersatu (PBB) Mulu Women’s wing empowerment programme here yesterday.

Fatimah explained that civil law in Sarawak has set the age limit of 18 but in certain situations where girls are underage before marriage, they need to get approval from the state government through their respective Resident’s offices, before being allowed to be married.

“For syaria law in Sarawak, though it is based on psychological and biological factors (puberty) if it involves minors, it needs to get approval from the syaria court before the marriage can proceed,” she said.

Fatimah, who is also PBB Women chief, said for customary marriages, efforts are being made to standardise the minimum age of marriage which involve various ethnic groups.

“The Sarawak Customs Council (Majlis Adat Istiadat Sarawak) is in the process of obtaining the consent of all parties to standardise the age limit as the issue of age limit did not exist in the customary system,” she added.

Fatimah said the state government did not legally allow girls under the age of 16 to marry as it would automatically be considered as rape in Sarawak.

She said five states — Penang, Sabah, Johor, Melaka and Perak — had agreed to amend their enactment or ordinance relating to minimum age of marriage while Selangor had amended its enactment and the Federal Territory was in the process of amendment.