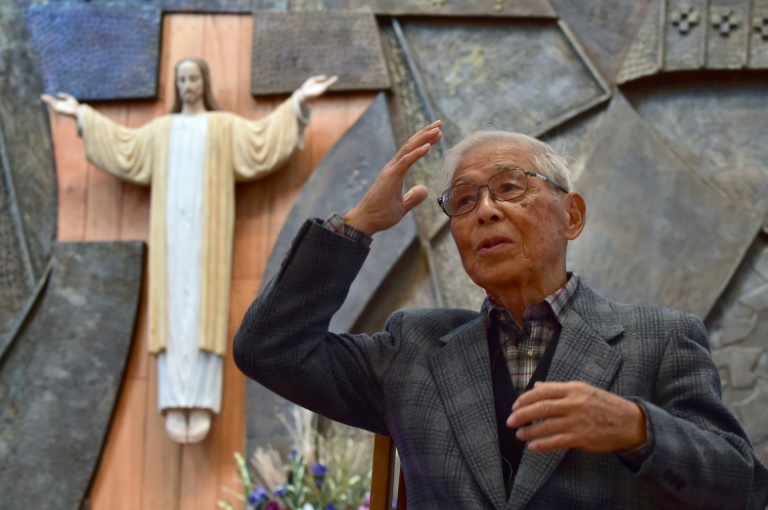 Atomic bomb survivor Kenji Hayashida speaks during an interview with AFP at a Catholic church in Nagasaki ahead of a visit by Pope Francis. – AFP photo

Kenji Hayashida thought about committing suicide in the years after an atomic bomb was dropped on his hometown of Nagasaki.

On Sunday he will hear Pope Francis call there for a world without nuclear weapons, a message 81-year-old supports passionately.

Like many ageing survivors of the attacks on Nagasaki and Hiroshima, Hayashida hopes the pope can bring fresh international attention to the cause of nuclear abolition, and also keep alive the memory of the devastating bombings.

A day before the pope arrived in the city, Hayashida and fellow local Catholics were rehearsing the hymns they will perform for Francis when he delivers mass in Nagasaki.

“We must not use nuclear weapons. I don’t even think nuclear deterrence works,” Hayashida told AFP at a church in the southwestern Japanese city.

He said he was “certain” that the pope — who once hoped to become a missionary to Japan — would send a strong anti-nuclear message.

Hayashida and his fellow choir members have been practicising for two months to prepare for the historic moment.

But the pope’s visit has special significance for those, like him, who survived the nuclear bombings at the end of World War II.

Hayashida was seven at the time of the US attack. He lost his mother and two brothers, and suffered severe burns on his head, arms and legs.

“I felt something was wrong with my head and I touched it. Then I saw blood all over my hand,” he recalled.

It took him more than six months to walk again and he became reluctant to go out for fear of people staring at his injuries.

At least 74,000 people were killed in Nagasaki when the bomb was dropped on August 9, 1945, three days after a first nuclear attack in Hiroshima killed around 140,000.

The attacks are still marked annually in Japan, but many survivors fear people are forgetting the dangers posed by nuclear weapons.

“We must not repeat the atrocity of nuclear bombs,” Minoru Moriuchi, an 82-year-old Catholic survivor in Nagasaki, told AFP.

“The Pope never meddles with politics but I hope people listening to his message will think seriously about the nuclear issue.”

Moriuchi described a “living hell” after the bombing.

“Four other relatives were brought in… but they didn’t look like humans,” he said.

The pope’s visit comes at a time when many survivors feel the international consensus on the danger posed by nuclear weapons is being eroded.

North Korea has continued to fire short-range projectiles and test weaponry, while the US and Russia failed to renew a Cold War-era nuclear pact in August, triggering renewed fears of an arms race.

Next year will also see talks reviewing the nuclear Non-Proliferation Treaty (NPT), which seeks to prevent the spread of nuclear weapons and technology.

– A world ‘without survivors’ –

“The world is in a critical situation,” said Masako Wada, a 76-year-old survivor of the Nagasaki attack.

“In today’s Japan, not many people know about nuclear abolition. People don’t relate to the issue.”

She fears history is in danger of being forgotten as survivors age.

“Survivors are on average in their 80s. I’m horrified when I imagine the world without survivors telling their stories,” she said.

For Hayashida, the pope’s visit carries a special personal resonance because of the Christian Catholic faith that helped guide him through the aftermath of the attack.

“It wasn’t easy when I was young. I never say this to my wife, but I even thought of committing suicide before getting married,” he said.

But he now believes that God wanted him to live.

“My life was extended by the providence of God. I was left to live… to protect the faith.” – AFP