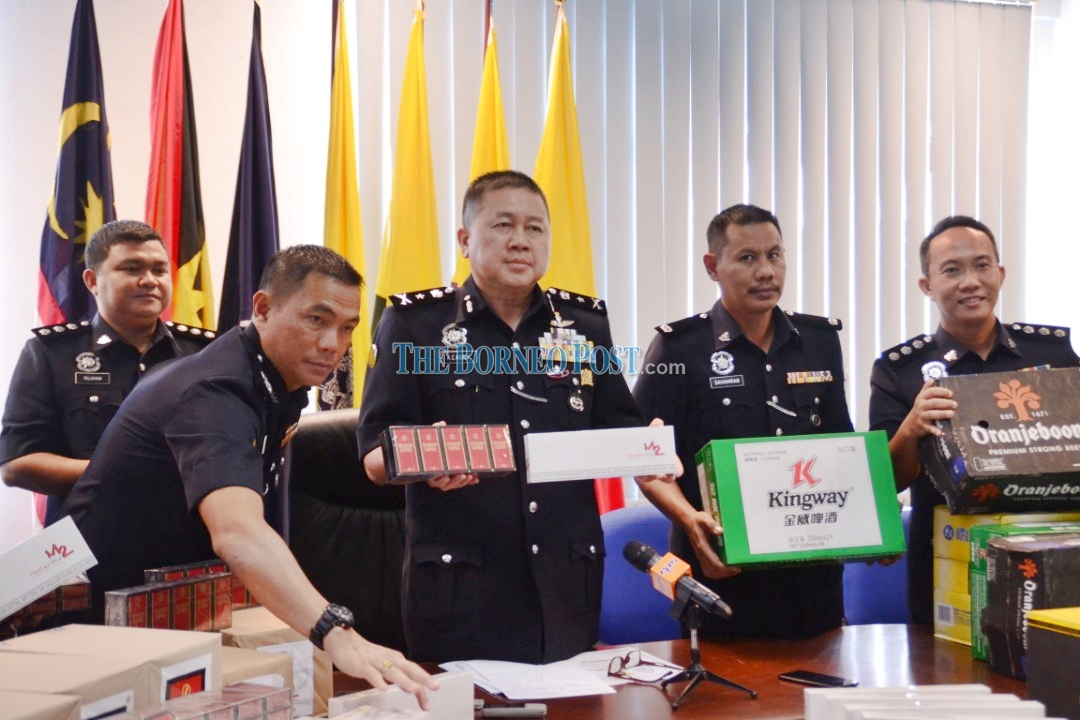 Khaw (centre) and other GOF officers hold up the seized illicit cigarettes.

Speaking at a press conference today, Sarawak GOF commander SAC Dato Khaw Kok Chin said the cigarettes were found inside a five-tonne truck near Batu Kawa here during an operation.

“After waiting for two hours with no sign of its owner, our team alongside three Malaysian Anti-Corruption Commission (MACC) Sarawak personnel proceeded to inspect the lorry.

Khaw mentioned that the cigarettes were believed to be brought in through the border from a neighbouring country and would then be distributed here.

The GOF also seized contraband liquors worth RM92,160 (including tax) in a separate operation that took place at a warehouse in Jalan Ellis yesterday afternoon.

According to Khaw, the operation dubbed ‘Ops Libas’ was carried out at 1.30pm involving six GOF Battalion 11 personnel with three MACC Sarawak personnel based on information received.

“A total of 512 boxes of contraband liquors of various brands hidden in the warehouse were seized during the operation.

“A 39-year old male who claimed to be the owner of the warehouse failed to present relevant documents pertaining to the discovery of the contraband liquors. He was arrested to assist further investigations,” he added.

Khaw said the illicit liquors were believed to have been smuggled in from a neighbouring country.

According to a statement, the GOF have carried out three operations so far: ‘Ops Awas’, ‘Ops Batas’ and ‘Ops Libas’ – with 134 recorded cases from January till present.