Sunday, September 20
You are at:Home»Health & Environment»Killer crocodiles: Why are more humans being attacked in East Timor? 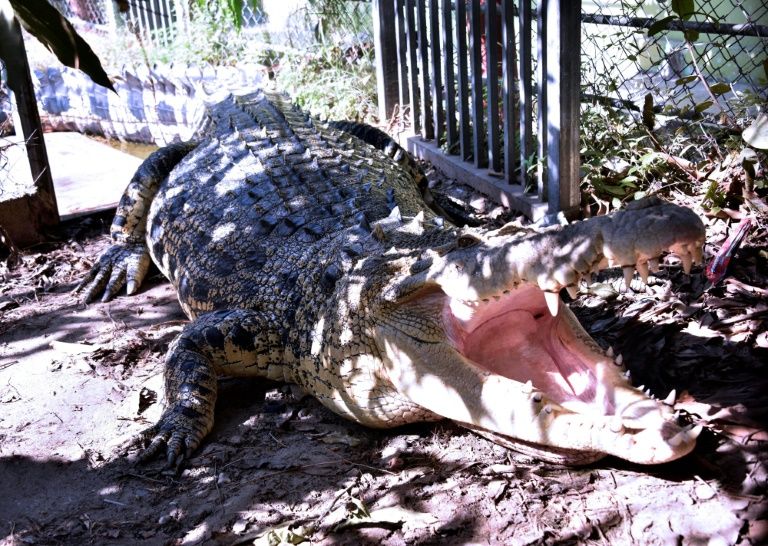 Crocodile attacks have jumped more than 20-fold over the past two decades in East Timor, with an average of one person a month falling prey to the ferocious reptiles, though not all are fatal. AFP Photo

Mario Da Cruz could only watch in horror as a small army of crocodiles killed a child on an East Timor beach — another victim of the tiny nation’s soaring rate of attacks.

Such incidents have jumped more than 20-fold over the past two decades with an average of one person a month falling prey to the ferocious reptiles, though not all are fatal.

“I was walking along the beach and suddenly this group of crocodiles came out of the water so I panicked and ran, but one of them bit my leg,” explains Da Cruz.

“Another attacked a small child who died right then and there,” he says, adding that his home town of Lospalos has seen a jump in crocodiles striking humans.

East Timor sits between Indonesia and Australia, and a large number in the impoverished nation of 1.2 million rely on the waterways for every aspect of life.

People are targeted by crocodiles while they are fishing in small boats, or bathing and collecting water to drink.

“They have had a pretty serious increase in the number of crocodile attacks in the past 10 years,” said Sam Banks, a conservation biologist at Australia’s Charles Darwin University.

Timor’s rate of attacks jumped from fewer than one per year in 1996 to more than a dozen annually in 2014, the most recent data available.

That jump made croc attacks a fatality risk 10 times greater than malaria, according to Sebastian Brackhane at Germany’s University of Freiburg, who has studied East Timor’s crocodile management.

Brackhane and other scientists have looked at what might be behind the jump in a country with a relatively low population of native crocs, including the possibility of humans encroaching on their habitat.

But “we think that an increase in the number of large saltwater crocodiles is the primary factor”, he told AFP.

“The problem is not limited to (East Timor). Other islands, such as the Solomon islands and the Andamans, and several coastal areas of Indonesia show similar patterns of increasing human-crocodile conflict,” Brackhane added.

Many Timorese, who revere the reptiles, believe the rise in attacks is down to foreign creatures swimming over from Australia or elsewhere in search of food.

Banks says that conservation efforts have boosted Australia’s crocodile population,leading to greater competition for resources — and potentially forcing some to go farther afield.

So he and Yusuke Fukuda, a wildlife scientist with Australia’s Northern Territory government, are hoping that DNA testing will solve the mystery surrounding the sudden rise in crocodile attacks.

Scientists say it is feasible for the creatures, which can grow up to 20 feet (six metres) long and weigh 1,000 kilogrammes (2,200 pounds), to make the 500 kilometres journey across the Timor Sea from Australia.

It is also possible the reptiles could swim from Papua New Guinea, Indonesia or even Malaysia.

Banks and Fukuda, with the blessing of Timorese officials, took DNA samples from 18 crocodiles during a recent two-week trip.

The pair headed out with Timorese officials to local streams and rivers. Armed with four-metre barbed poles they stood on the banks and targeted wild crocodiles, scooping skin samples from the fleshy part of their tails.

“It’s less ‘out there’ than it sounds,” Banks said, explaining: “The DNA sampling pole is long…and (they) usually flinch and bolt when sampled.”

They also took samples from wild crocodiles that had been caught by locals and kept in cages.

The Timor samples were then compared against a database of Australian ones to see if there was a genetic match.

Results from the first round of tests give no indication that foreign reptiles are present in local waters.

But he cautions that more testing across a wider area is required to get a clearer picture and to rule out foreign crocodile attacks.

“The hypothesis still stands as it is. We don’t have anything to disprove it quite yet,” he insists.

Many Timorese are loathe to blame indigenous crocodiles, a reptile often referred to as abo — grandfather in the local Tetum language — and honoured in ubiquitous shrines.

The animals are central to Timor’s creation myth that sees a young boy befriending a crocodile which later dies and is resurrected from the sea in the shape of the mountainous country.

“According to our beliefs, if a crocodile bites someone then it means we have committed a grave sin,” she added.

This reverence could mean that Timor’s sky-high crocodile attacks are actually under-reported, and may complicate conservation efforts and strategies to prevent animal-human conflict.

“It’s not permitted to harm them (crocodiles). If you do, there are serious consequences,” Banks said.

“So you have to balance cultural values against human safety.” – AFP