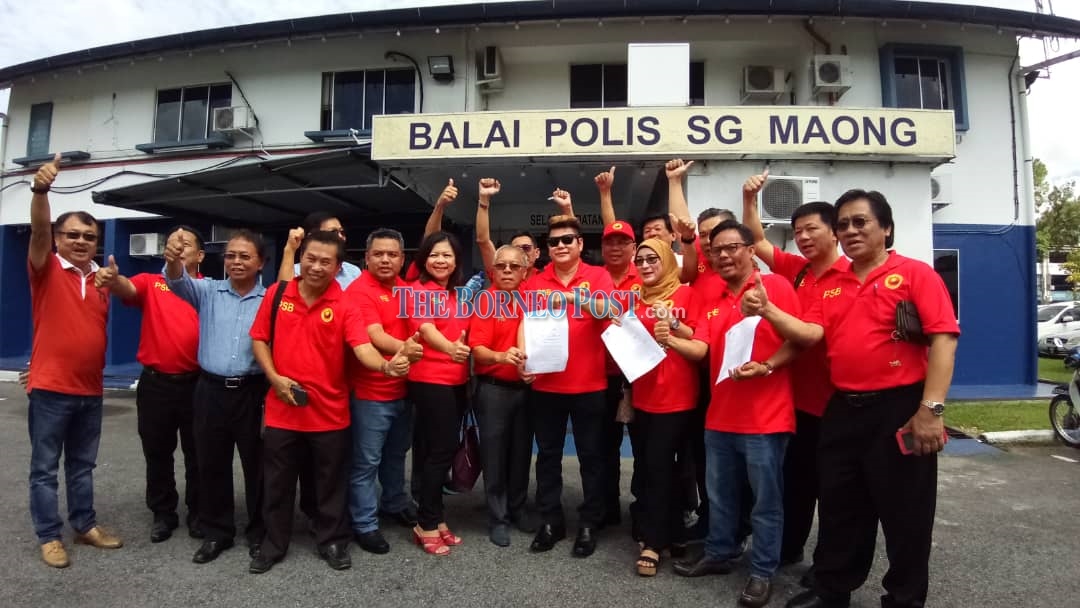 Rayong (front row fifth left) holding a copy of the police report together with other members in front of the Sungai Maong police station this morning.

KUCHING: The steady growth of Parti Sarawak Bersatu (PSB) members might be the reason as to why they were maliciously attacked online.

Yesterday, an image of a news website’s heading that was doctored to read: ‘Wong Soon Koh: Dayaks are stupid with low IQ and easy to be manipulated’ was circulated on WhatsApp and Facebook.

“It is a big possibility that the suspect who doctored the image is feeling threatened by PSB,” said its vice-president Dr Johnical Rayong Ngipa to reporters at the Sungai Maong police station this morning.

Rayong, who is also PSB youth chief, clarified that the article’s real heading was supposed to be ‘PSB backs Wong Soon Koh on whether to quit Sarawak Cabinet’.

The party’s youth wing had earlier lodged a police report over the doctored image and wants the police and the Malaysian Communications and Multimedia Commission to investigate the matter.

He further mentioned that PSB have managed to attract a large number of new members on a daily basis from each race in Sarawak, which reflect’s the party’s strong support.

“Maybe this is also one of the reasons as to why the doctored image was circulated which is to scare the Dayak community from joining PSB,” he added.

Rayong who is also Engkilili assemblyman said there are about six thousand PSB members under his constituency and the party headquarters are receiving new membership applications throughout Sarawak on a daily basis.

He also revealed that PSB is targeting to contest in 60 state seats in the next state election.

Meanwhile, PSB president Dato Sri Wong Soon Koh yesterday said that a representative of the news portal confirmed that they never carried a report with such a heading.

He enthused that PSB was committed to a multiracial, multicultural and multireligious society with a Sarawak identity and ideology.

Previous ArticleMuhyiddin: Malaysia does not rule out probability of Daesh shifting its operation to Southeast Asia
Next Article Killer crocodiles: Why are more humans being attacked in East Timor?