Monday, February 17
You are at:Home»News»Crime»52 Chinese nationals suspected of illegal online activities snatched up in Immigration raid in Pending 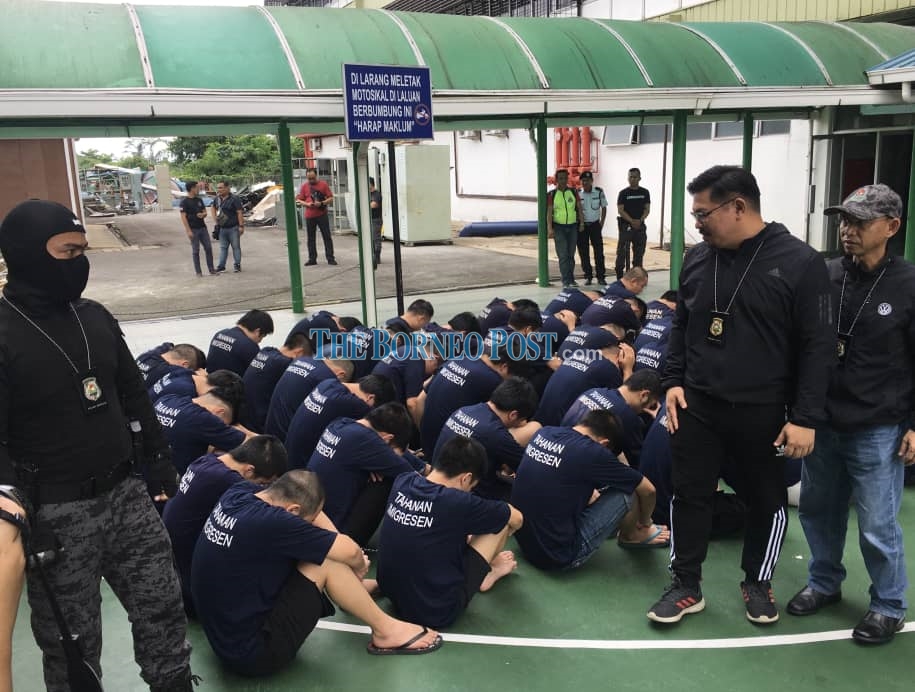 KUCHING: A total 52 Chinese nationals believed to be involved in an online syndicate were nabbed by the Sarawak Immigration Department following a raid in Pending at 10.30pm yesterday (Nov 29).

“The suspects included 50 men and two women aged between 18 and 35. They were arrested on two floors of the building.

“We suspect that they have been operating for the past seven months,” he told a press conference today.

He also disclosed that only six of those arrested have travelling documents while the rest could not produce passports during the arrest.

They have also committed offences under Immigration Act 1963 such as overstaying, having false endorsements, violating pass regulations and entering and staying in Malaysia without a valid pass.

“Up to now, no representative or any individuals have come up to produce passports on their behalf. We believe they entered the country using social visit passes.

“The Immigration Department will continue to track down the remaining members of this syndicate through intelligence and surveillance,” he said.

He also said the seizure of the items, believed to be worth at least RM50,000, were made under a provision of the Anti Money Laundering Act 2001 to enable further investigations to be conducted.

“We will track down the mastermind behind these activities. Our department will communicate with other agencies such as Bank Negara Malaysia, police, Malaysia Communication and Multimedia Commission, Malaysia Companies Commission, and the local council,” he added.

To a question, he said it was premature to establish the type of online activity run by the group when asked whether it was conducting online gambling.

He said the department had carried out intense surveillance on the group for a month before the raid, and he called on the public to step forward with information of any similar suspicious activities.

“We welcome the public to be the whistleblowers of such activities. We also want to remind the public not to harbour illegal immigrants or they will risk facing the law,” he said.

On Nov 20, authorities foiled an online investment scam syndicate with the arrests of 680 Chinese nationals based in Cyberjaya.

The suspects were nabbed after the Immigration Department raided a six-storey building, believed to be the call centre of the operations which had been targeting victims in China.

This was followed by the arrest of 104 Chinese nationals for being part of an online scam syndicate in Kota Kinabalu on Nov 26 following raids on three separate locations around 1Borneo mall there.

Previous ArticleRegulation on vaping to take into account composition of e-liquid, sale – Dr Lee
Next Article Motorcyclist found crushed to death after crashing into lorry