Tuesday, October 19
You are at:Home»News»Nation»Battle to save Sabah’s pygmy elephants 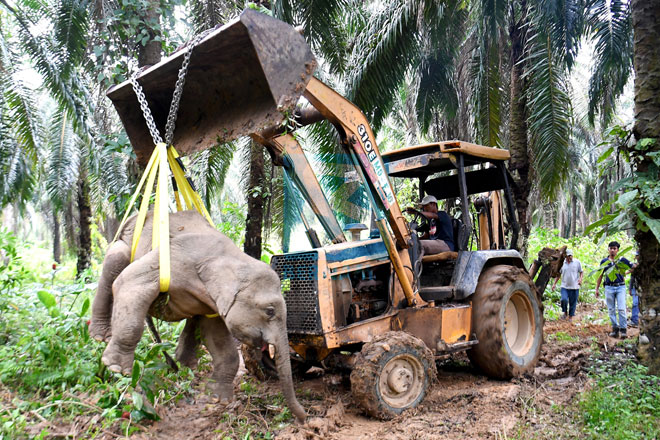 KOTA KINABALU: Imagine stumbling upon a Borneo pygmy elephant in the throes of misery and pain as it lies in the jungle waiting to die.

Probably trapped, shot, injured or poisoned, its tusks have been brutally removed — obviously the work of heartless poachers who are after its ivory.

Such a heart-rending sight is quite commonplace for Sabah Wildlife Rescue Unit assistant manager Jibius Dausip who has been rescuing and taking care of the endangered pygmy species for 30 years now.

No words can express the grief he feels each time he sees a pygmy elephant writhing in agony.

“I regard them as my family but they are becoming increasingly endangered as the days go by,” said Jibius, 55, who is sad, worried, frustrated and angry that there are people out there who totally lack empathy and would go to any extent to get what they want.

Having been involved in rescuing pygmy elephants since 1991 when he was appointed head of the Sabah Wildlife Department’s elephant unit, he cannot help but wonder why people would want to harm these creatures which, he said, are certainly more gentle and friendlier than other elephant species.

“They are also known for their distinct features and are Sabah’s most unique wildlife treasures,” he said, adding that the pygmy elephant is one of the reasons tourists flock to Sabah.

The pygmy elephant is native to northeastern Borneo. Currently, Sabah has an estimated 1,000 to 2,000 pygmy elephants, with about 250 to 300 of them concentrated in Sukau, Kinabatangan.

“If no one cares about them, it is highly possible that the pygmy elephant will face the same fate as the (Sumatran) rhinoceros that has now become extinct,” he told Bernama when met at the temporary elephant treatment and training centre in Sepilok, Sandakan, located about 330 kilometres from here.

The pygmy elephant is considered a special breed as it is smaller in size and has a longer tail and shorter trunk than other elephant species.

The male pygmy elephant can grow to a height of about 2.7 metres, compared to other Asian species that can grow to 3.2 metres.

“The sound of their trumpeting is also unique and different from that of other Asian elephants,” said Jibius, who is familiar with the characteristics of the pygmy elephant having handled them for almost three decades.

He said they are generally gentle by nature and have the ability to interact well with their fellow herd members and with humans as well.

“Their antics can be amusing to watch… despite being large in size, they can do cute and funny acts,” he added.

They are also intelligent and endowed with a good memory which allows them to get adapted to training techniques easily. The jumbos also have the ability understand, as well as express their feelings.

“We can train the elephants and become close to them as they can understand how we interact with them. They can adapt to training and respond to it,” he said.

Jibius said currently six male pygmy elephants, rescued from all over Sabah, are undergoing treatment at the temporary holding centre in Sepilok. After they have recovered they will be translocated to the Borneo Elephant Santuary (BES) in Kampung Sentosa Jaya, Kinabatangan, about a two-hour drive by road from Sepilok.

Jibius, who is also BES enforcement officer, said the sanctuary — Borneo’s first and only elephant sanctuary —  is being constructed in phases and is expected to be fully operational in two years’ time.

Located on Lot 8 of the Kinabatangan Wildlife Sanctuary, BES covers 25 hectares and is being developed by the Sabah Wildlife Department in collaboration with the Malaysian Palm Oil Council and Borneo Conservation Trust and other partners.

The sanctuary, which is now home to three rescued pygmy elephants, is part of measures by the state government to support the implementation of its Elephant Conservation Action Plan.

BES currently comprises a quarantine area, treatment clinic, administrative building and staff quarters. It will be open to tourists after it is fully completed.

Besides addressing conservation issues and providing a refuge for orphaned and injured pygmy elephants, BES will also serve as a holding area for displaced wild elephants that would be translocated from small and fragmented habitats to larger and more sustainable elephant ranges.

The sanctuary is aimed at among others to carry out research, develop capacity in elephant conservation, enhance public awareness and stimulate ecotourism.

Its long-term objective is to operate as a world-class resource and training centre for conservation-related issues and the in/ex-situ management of Asian elephants.

“In view of the fact that BES will be open to local and foreign visitors, it is envisioned that public awareness of the plight of the pygmy elephant’s survival can be further enhanced,” said Jibius, adding that the sanctuary would also be among the state’s efforts to manage the human-elephant conflict in Sabah.

According to Jibius, the pygmy elephant is not aggressive by nature but would attack if it is under pressure or if it senses danger in its immediate surroundings and is compelled to protect itself and its herd.

He said elephants encroach on villages and oil palm plantations in search of food and advised villagers and workers not to scare the pachyderms away by using objects or techniques that can harm them or take them by surprise.

He urged local communities to work closely with the relevant government agencies and non-governmental organisations to create a more effective system of managing the ecologies and ecosystems of Sabah’s elephant habitats.

Such collaboration, he added, was important to check poaching activities and preserve the state’s wildlife populations. — Bernama 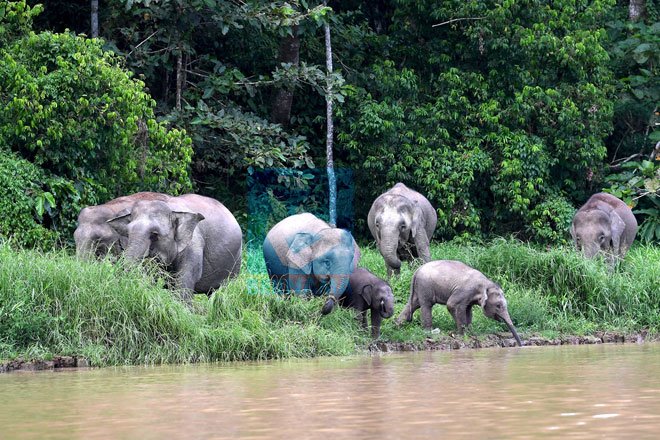 A group of Borneo elephants by the riverbank. — Bernama photo