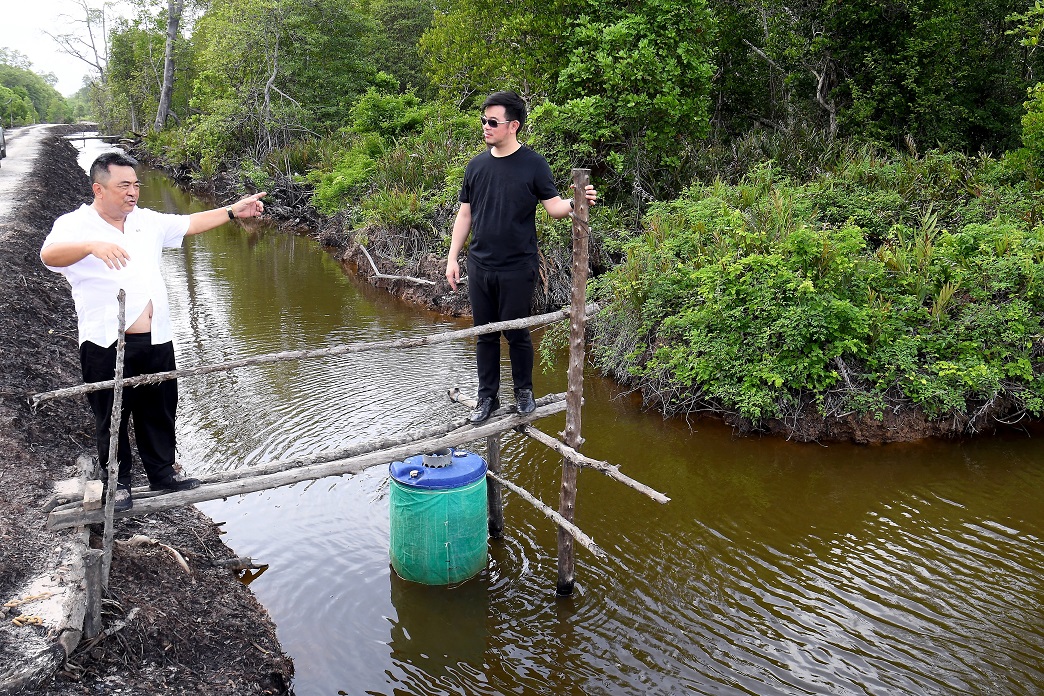 Wong (right) and Lo during a visit to the crab farms in Sungai Kayu yesterday. – Bernama photo

Under the ministry’s planning and guidance, MD Bahvest Resources Berhad has successfully hatched 1.2 million of fingerlings (baby crabs) through series of Research and Development, making the hatchery the only one in Malaysia to have successfully produced the three species of crab on a commercial scale.

Wong said that the three types of crabs are hardly available at the market at the moment as they live in the deep sea and are hard to be caught.

Hence, he said that the successful commercial breeding of the three crabs is good news for Sabah which would become the pioneer in the crab sector in Malaysia.

“This is a historical development and I am happy and proud. A few months ago we had started this initiative to have this crab hatchery to ensure the sustainability for this sector. Today after three months of attempt, the crab hatchery in Sandakan has succeeded.

“We also have the same attempt conducted in Tawau and Tuaran but they have yet to be able to produce fingerlings on a commercial scale, which is at least 100,000 fingerlings.

“That is why I want to thank Datuk Lo Fui Ning (owner of MD Bahvest Resources Berhad) for his effort and for employing marine biologists and experts (from Korea) to make this Research and Development a success,” he said.

Wong said that the crab hatchery could be a start to a multibillion business in Sabah as the demand is high while the crab species that they have hatched is hardly available at the market.

He said this during his inspection at MD Bahvest Resources Berhad located in Sungai Kayu Mile 7, here.

The crabs that are produced at the hatchery here are free from chemicals, toxic substances, steroid, and are grown in natural and organic environment.

Meanwhile, two other species of crab are the Mud Crab (Scylla Serrata) and the Crucifix Crab (Charydbis Feriatus), still under Research and Development process.

Mud Crab species that live in mangrove swamp is currently being studied at a five-acre swamp area near the hatchery here to be bred naturally.

“Mud crab breeding is also part of our master plan. The Chief Minister and I have visited Tarakan (North of Kalimantan) and learned that they are able to produce 12 to 15 tonnes of mud crab per day with 225 hectares of swampy land with a formulated system.

“We will study this system and apply it here for Research and Development first with 5-acre land near here; we have been studying it for five to six months now; because in Sabah, we could easily find 200,000 hectares of natural mangrove swamp.

“We (Sabah) have excellent natural resources, so we would be able to produce natural crabs here,” he explained.

Wong said that the ministry would seek assistance from the Universiti Malaysia Sabah (UMS) for the Research and Development of mud crab natural breeding as UMS had already successfully produced about 500 crabs through natural breeding.

“However, we are aiming to go commercial (over 100,000 crabs) in order for the crab to have enough supply for it to be marketed,” he said.

“If things go smoothly according to our (ministry’s) master plan, in a year, we will be able to help the villagers, graduates and the young people by providing a scheme that would give them mud crabs and the necessary infrastructure to start a hatchery farm on their own so that they could make a living in this sector,” he said.

Fingerlings take about four to eight months to grow into adult crabs, depending on its species. Fingerlings aged 20 to 25 days that are hatched here will be sent to the company’s crab farm in Silam, Lahad Datu to be grown until they are ready to be marketed.