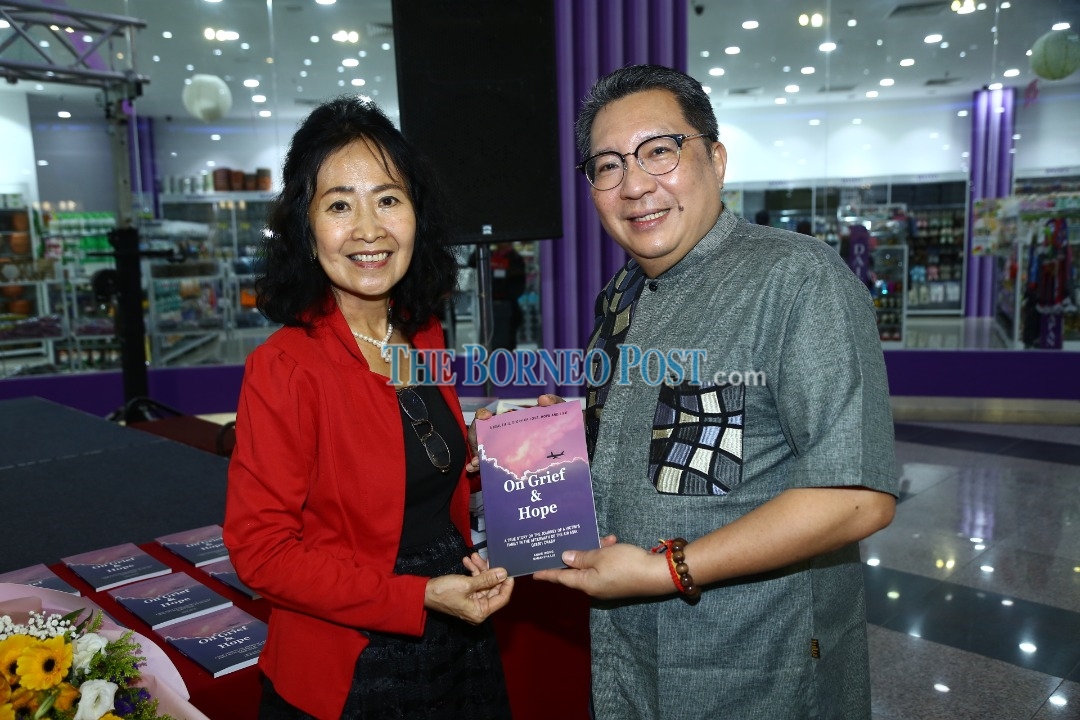 KUCHING: Annie Wong, the widow of Sii Chung Hei, who was among those who died in the AirAsia flight QZ8501 tragedy, has picked herself back up and released a book telling how she had dealt with her grief and pain over the last five years.

She said it was very challenging in the first several months since the incident, which happened in Dec 28, 2014.

However, support from not just family members but also close friends and her close relationship with the church, have helped her go through her grief and pain, and turned it into hope.

“Grief comes in many forms. Some people may suffer worse grief than I did. Hence I wrote this book to give support and hope to others who are in the same position as I was, or even worse,” Wong was speaking during the launch of her book ‘On Grief and Hope’ today at Boulevard Shopping Mall here recently.

“The sudden death of a loved one, be it a spouse or a family member, is often a daunting and painful experience to those involved. It can have a devastating effect on the surviving family members,” said the retired UiTM lecturer.

Sii was one of 162 passengers killed when the Indonesia AirAsia flight QZ8501 Airbus A320 crashed into the Java Sea while en route to Singapore from Surabaya, Indonesia in the morning of Dec 28, 2014. There were no survivors.

Wong and her three children – two daughters and a son – went through a challenging time when she lost her beloved husband and their father very unexpectedly in the air crash.

She said the sudden grief had caused them so much pain, and threw them into a state of utter shock, disbelief, grief, illusion and confusion.

She said the book, co-written by her daughter Samantha Sii, tells the experiences on their roads to recovery.

“It is a true story of our journey in the aftermath of an airplane crash. It focuses on sharing our reflections after the sudden death of my husband and our journey to recovery. It offers snapshots of how we trudged through our journey of grief, pain and denial.

“I turned to my faith to embrace the reality and found purpose in our lives again,” said Wong.

She said the book was written for anyone who has been undergoing grief as a result of losing a loved one at some point in life.

She also hoped that the account shared in this book on her experiences towards recovery could bring comfort to those going through grief and help them to cope with it better.

The book can be found in local bookstores throughout Kuching for RM15. Proceeds from the sales of the book would be donated to the Society for Parents of Children with Special Needs (Pibakat) and Kuching Autistic Association.

Meanwhile, Kuching South City Council (MBKS) Mayor Datuk Wee Hong Seng who graced the book launch commended Wong’s effort to be able to pick herself up again after such a harrowing loss.

“Going forward and enjoying life again doesn’t mean forgetting about the loved one who had passed on or he is no longer missed.

“Piecing together the fragmented emotions, accepting and move on doesn’t mean you betray your consciousness, distancing yourself or ignoring the emotional burdens which your family members are carrying at the same time. It simply means that your grief has run its course,” he said.

Wee said the death of a loved one was definitely a shattering experience with far-reaching physical, emotional, psychological and spiritual implications.

As difficult as the loss may be, he said it would be possible to move forward with hope, peace and love for the future without dwelling too long on the loss or be consumed by memories.

“The grieving process can be long and isolating, yet it’s crucial to accept support rather than grieve alone.

“Talking about it, receiving reassurance, feeling understood and acknowledging the loss will help make the recovery process more complete in the most challenging times,” he said.

“Annie Wong, I would like to congratulate your efforts to painstakingly write this Book and your willingness to share your struggles of loss, how you dealt with it and come out victoriously.

“I hope this Book will give encouragement, lights, hopes and help to inspire others with the similar devastating experience,” Wee added.