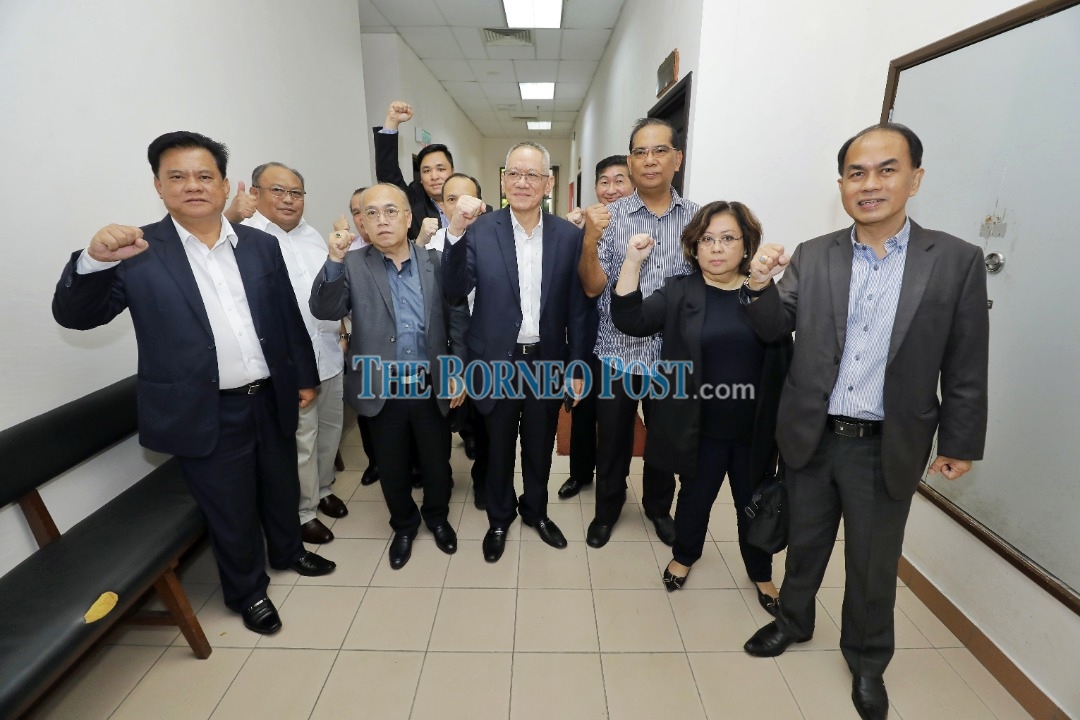 Ibrahim (centre) and his entourage celebrate after the court ruled in favour of Uggah in his defamation suit against Vernon.

He also allowed an injunction to restrain Vernon or his agents or servants or whosoever from publishing or causing to be published the words complained of or any similar word defamatory of Uggah in whatsoever manner.

The proceeding was held in the judge’s chambers as the courtrooms were all occupied this morning.

A man had attempted to take pictures of the proceeding from outside the chambers’ door, but was noticed by the judge.

He was called out by Ravinthran and was ordered to delete the photos that he allegedly took. He denied taking any pictures, and was excused.

The proceeding took about an hour before the judge delivered his decision.

“Basically the judge allowed the plaintiff’s (Uggah) claim and found that the defendant (Vernon) is liable, and ordered the defendant to pay damages of RM200,000 and legal cost of RM40,000, and also granted an injunction to my client,” Sim told reporters after the proceeding.

Sitting in for Uggah, PBB deputy secretary-general Datuk Ibrahim Baki confirmed Sim’s statement and said he would be conveying the news to Uggah.

Meanwhile, Kho said his client Vernon was away in Kuala Lumpur assuming his duties as the Special Officer to the Works Minister Baru Bian.

“I shall be seeking the instruction of my client on whether or not to proceed with an appeal because every high court decision is open to appeal. That decision has to be made by my client, I cannot be making it on his behalf,” he said.

Uggah had suit Vernon for calling him a “liar” and a “traitor”, which Uggah claimed were highly defamatory and published widely via the ‘PKR Sarawak State Media’ WhatsApp chat group late last year.

Vernon had made the remarks when commenting on the alleged imperfection of the amended Sarawak Land Code, particularly on the mechanism(s) to convert native customary rights (NCR) land to Native Territorial Domain (NTD).

Vernon had claimed that Uggah was “lying” when he interpreted that usufructuary right as a right that one can own and also use, which Uggah had vehemently denied.

Previous ArticleGoogle’s Sundar Pichai named CEO at parent firm Alphabet
Next Article CM: RM500 special assistance to be given out to federal civil servants in Sarawak