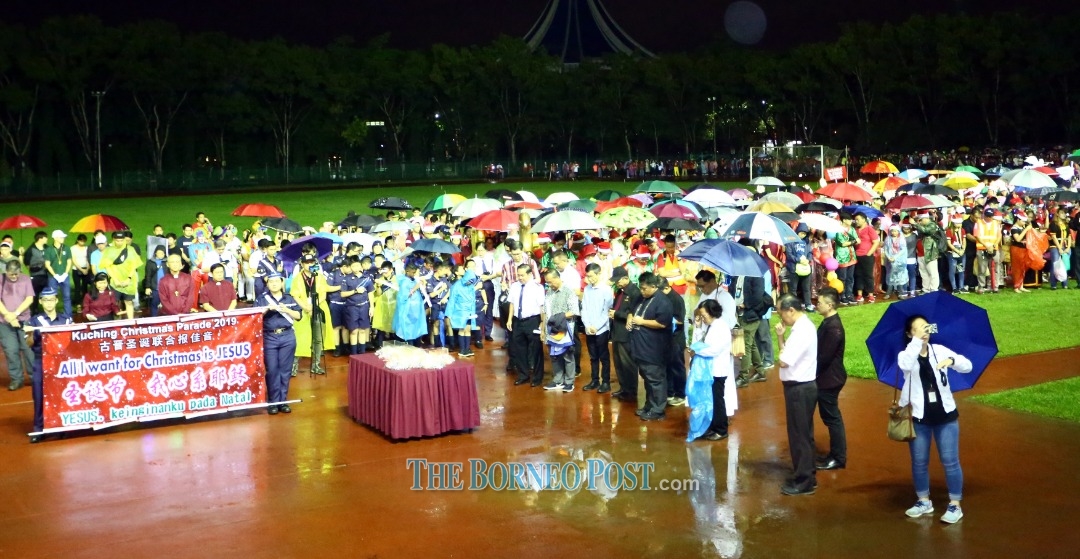 Participants braved the parade dressed in raincoats and carrying umbrellas.

KUCHING: Armed with umbrellas and caps, some 8,000 Christians from various churches all around the city converged on the Kuching South City Council (MBKS) Jubilee Grounds for the annual Kuching Christmas Parade earlier this evening.

The weather had been poor the entire day, but that failed to dampen the spirit of the participants who began gathering at the grounds as early as 5pm, even when the rain was still pouring.

Some took shelter from the downpour at the grandstands, while others stayed inside their vehicles in the parking lot, waiting for the rain to abate.

The rain let up at around 5.30pm, giving participants a window to sort out their contingents and begin preparations in earnest for the parade, with Bandar Kuching MP Dr Kelvin Yii among them, joining his Good News Fellowship Kuching contingent.

“This is a very special event happening in Sarawak, where churches, regardless of denomination, even people, regardless of age and ethnicity, are united through our faith, through our spirit of Christmas, where we come together not just from different churches but as one body in Christ to celebrate this wonderful season of peace, love and also a season of giving,” he said.

Dr Yii said this was a good opportunity to show the rest of the country and to the world that Sarawakians lived in harmony and celebrated different faiths, while honouring one another.

“So I’m looking forward to even walking in the rain because the joy of the Lord is our strength and will guide us through all the circumstances,” he said. 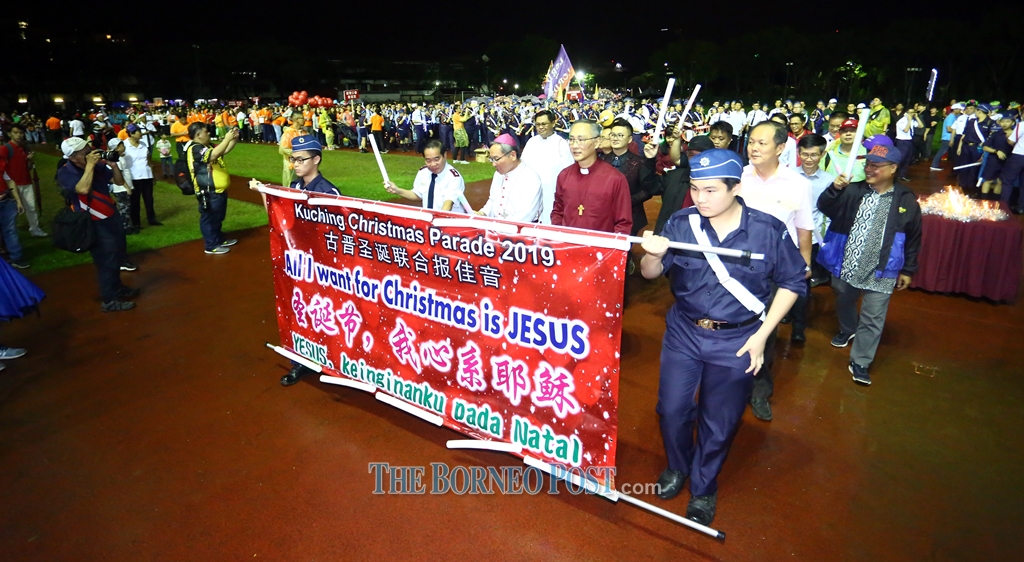 The rain finally slowed to a drizzle, giving participants a small window to organise and begin the parade in earnest.

The total distance of the route covered by the parade was 4km.

Michael Teng, 33, who was leading more than 100 participants from the Sarawak Blessed Church contingent, said they would be showcasing their creativity in arts by wearing a specific theme in the parade.

Each of his contingent members was wearing a cap adorned with an egg on top, symbolising the birth of Jesus Christ.

“Our contingent will also be singing praises along the parade,” said Teng. 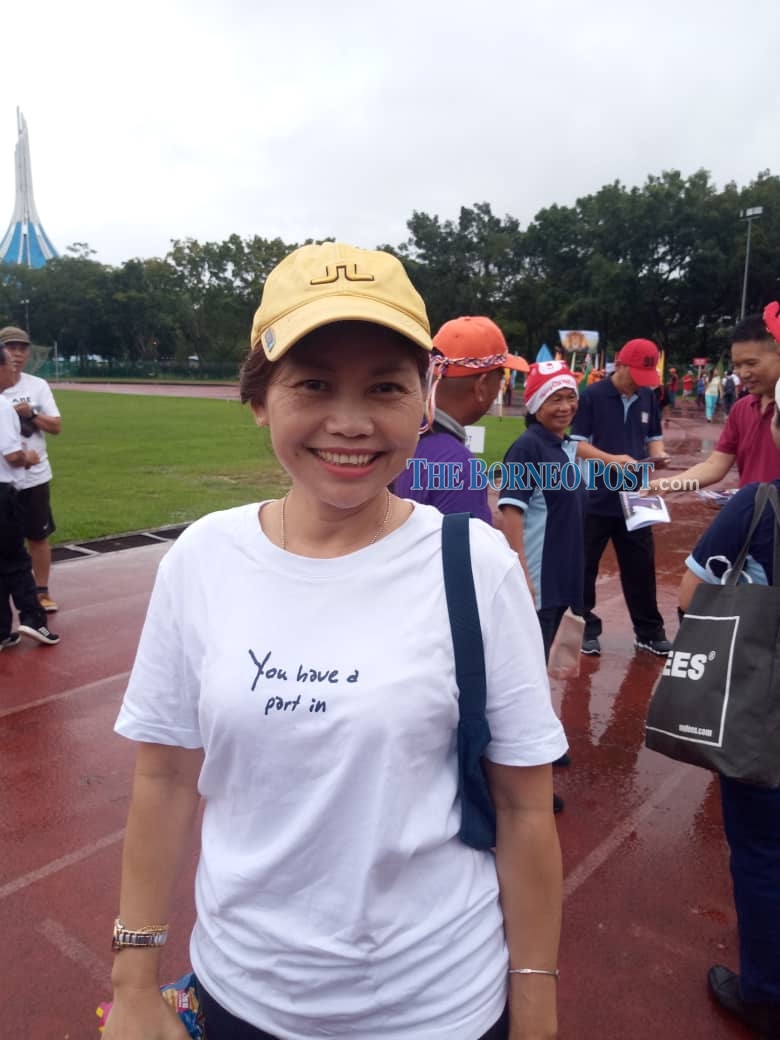 Sendie Tangan, 49, from the First Baptist Church, said she was very excited, even after participating every year for three consecutive years.

“I hope the sheer volume of the participants would show or send a message of unity in Sarawak.

“I brought along my family members,” she said, adding that her church’s contingent consisted of more than 100 people.

Representing the St Thomas Cathedral, Johanan Chambers, 48, was delighted to see the overwhelming response to the parade managed, despite the wet evening.

“It’s the spirit of Christmas,” he said, saying that rain or shine did not matter.

The St Thomas’ contingent comprised of about 200 participants, consisting of members from the choir, Sunday School, Server’s Guild, and many other ministries.

Scroll down for more pictures of the parade. 👇 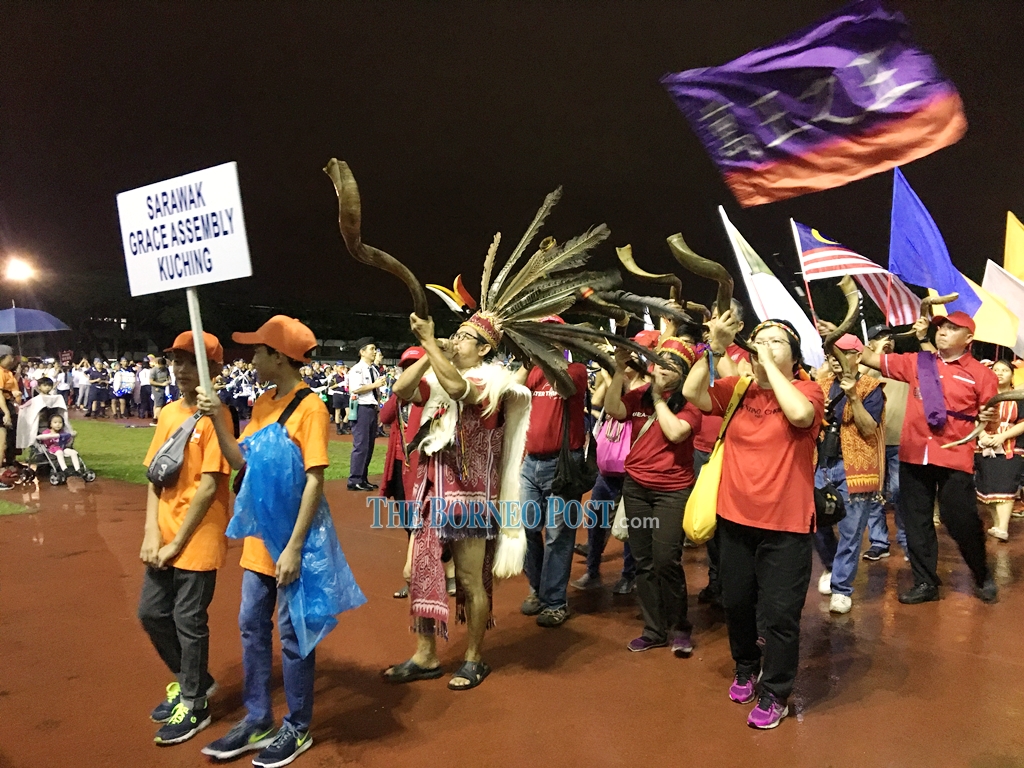 Over 8,000 participants from a multitude of Sarawak’s various ethnic groups took part in the annual Christmas parade. 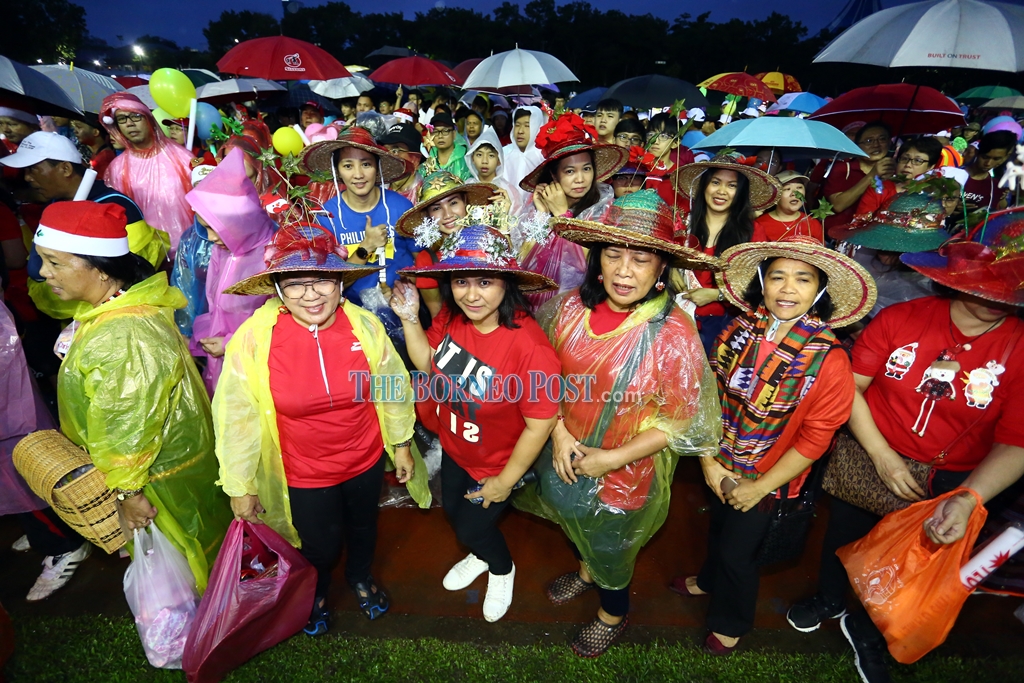 The rain didn’t stop these ladies from donning their hats and raincoats and coming out in force for the parade. Michael Teng (fourth from left) and his contingent wearing caps with an egg on top, symbolising the birth of Christ. 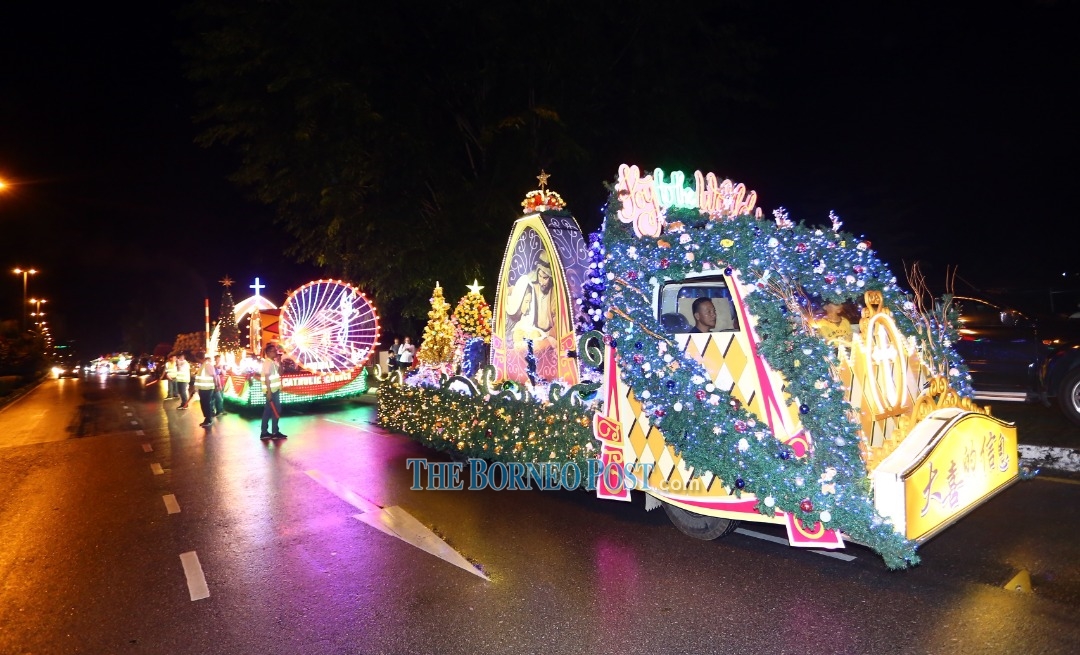 A section of the colourful floats that took part in the parade. 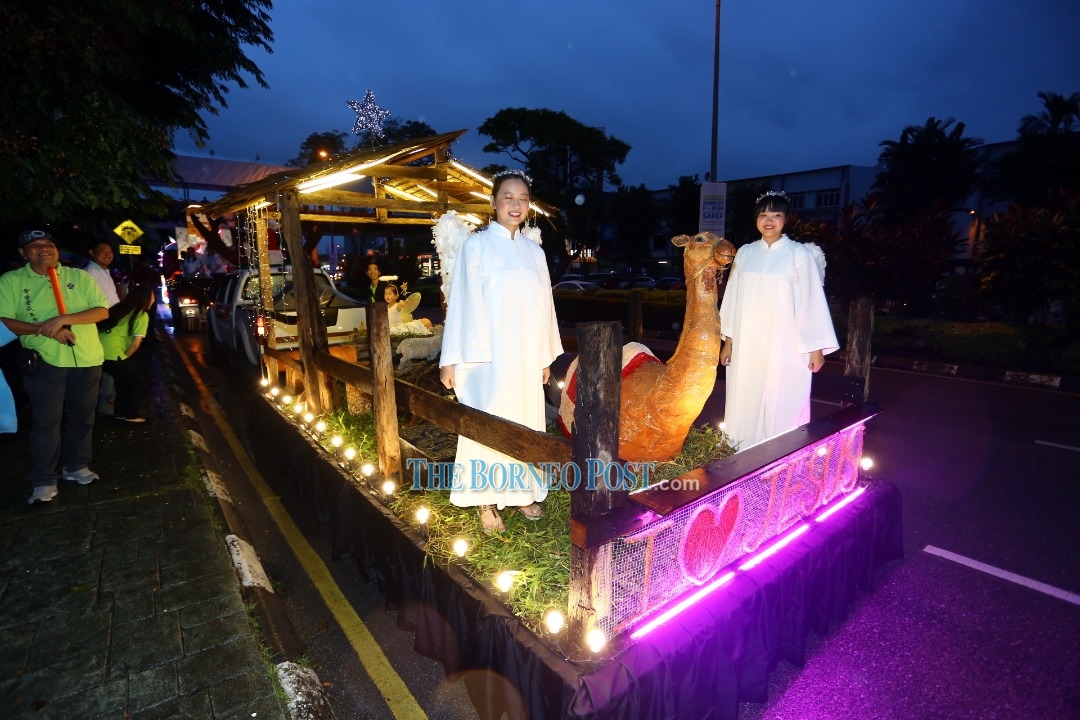 Participants dressed for the part during the annual Kuching Christmas Parade 2019. 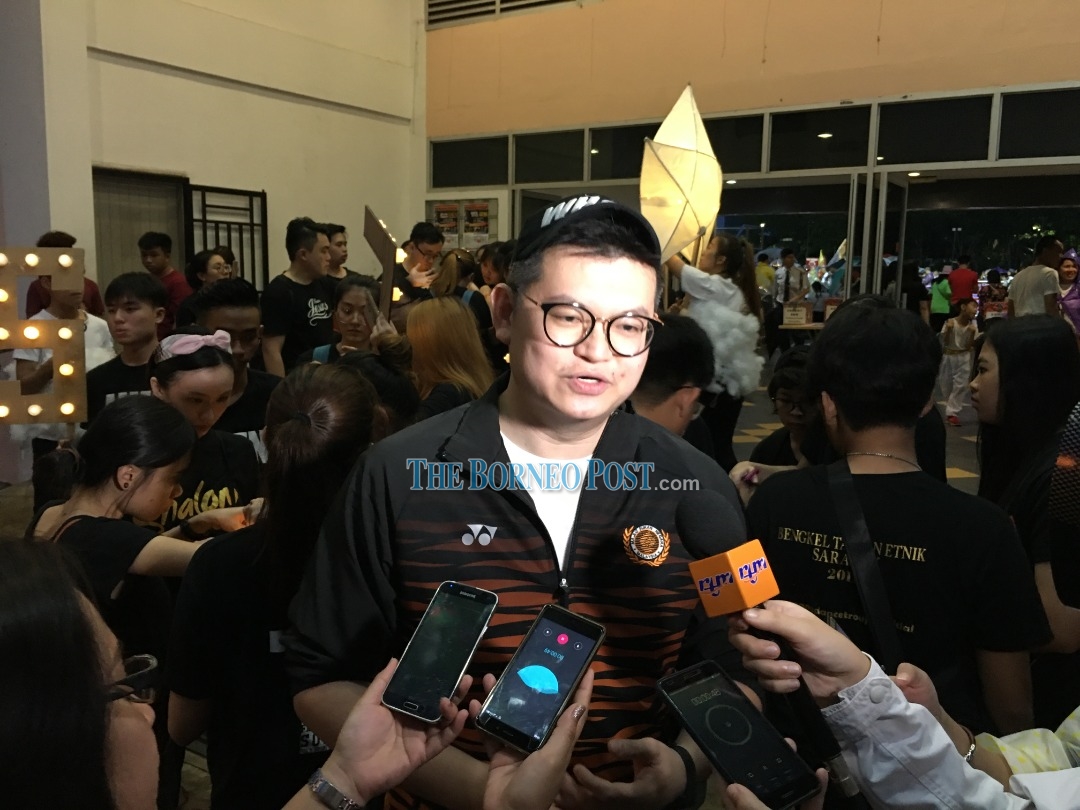 Dr Yii said this was a good opportunity to show the rest of the country and to the world that Sarawakians lived in harmony and celebrated different faiths, while honouring one another. Roman Catholic Archbishop of Kuching Archdiocese Most Reverend Simon Poh (left) lighting up a candle with other church leaders to officiate the Kuching Christmas Parade 2019. 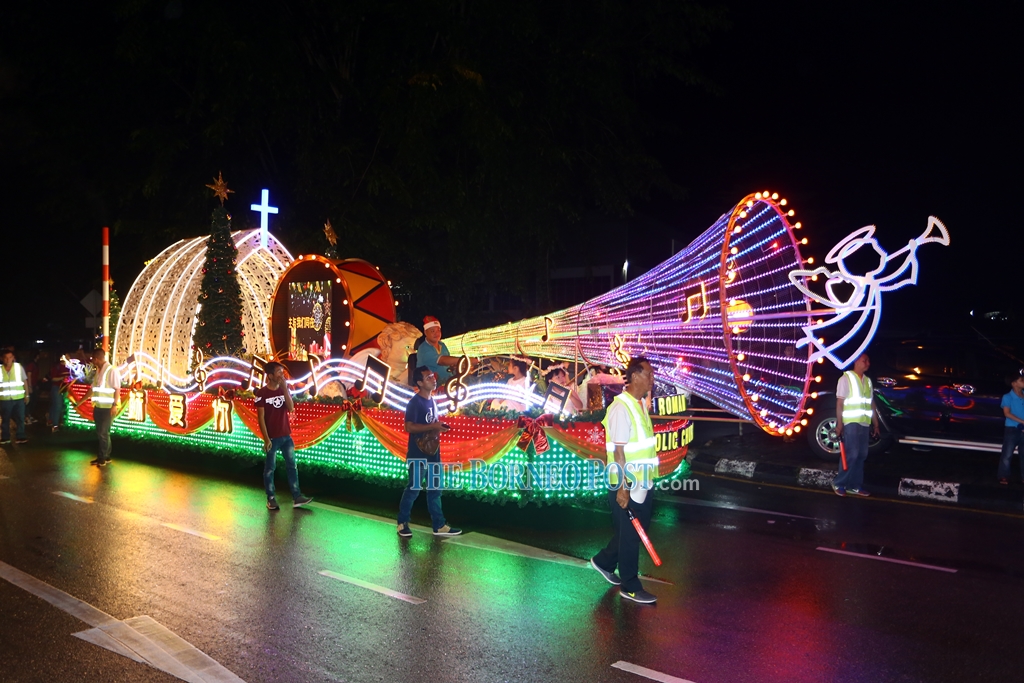 A beautifully lit float makes its way through downtown Kuching during the parade. 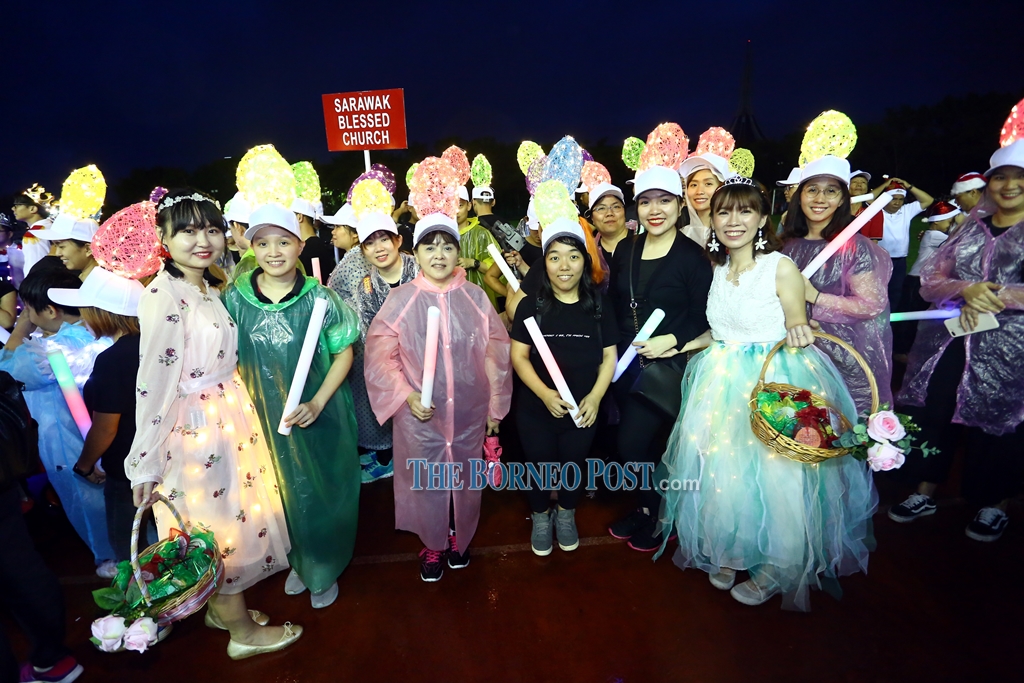 A section of the parade’s participants, who are all smiles, despite the downpour and wet weather. A Minecraft inspired float, with its angelic passengers. 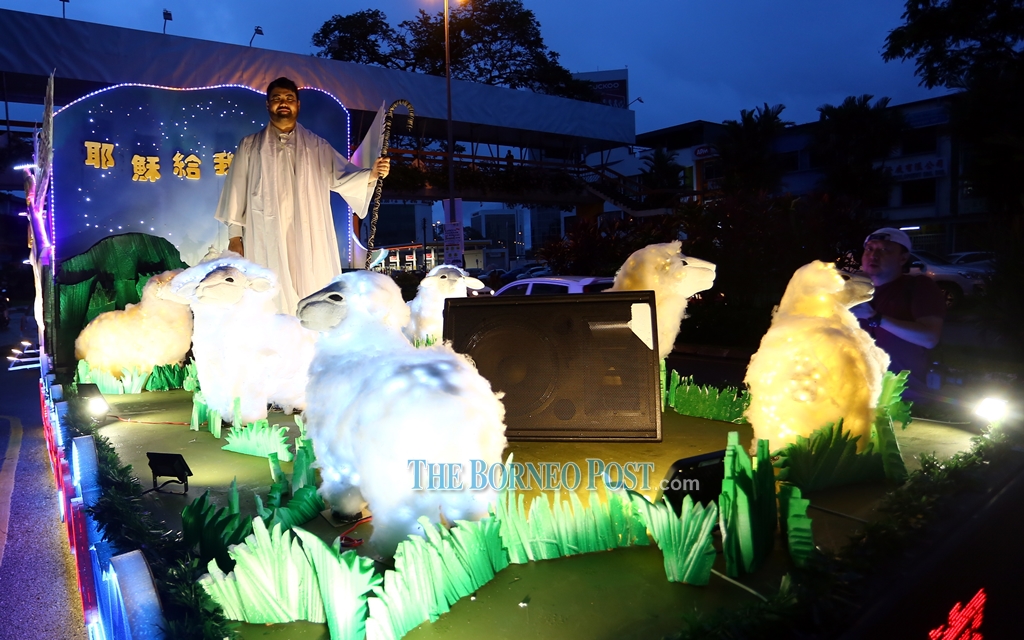 One of the many detailed and intricately crafted floats at the parade. 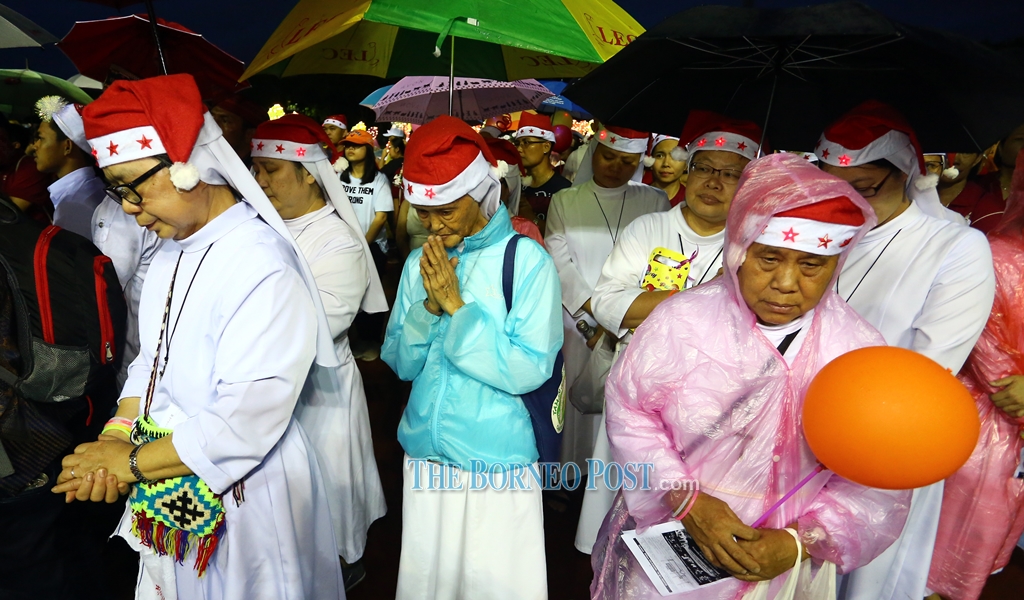 Members of the clergy pray during the parade.

Previous ArticleThree from Sabah killed in New Zealand crash
Next Article CPO Surina: ‘Begin your duty with a smile’