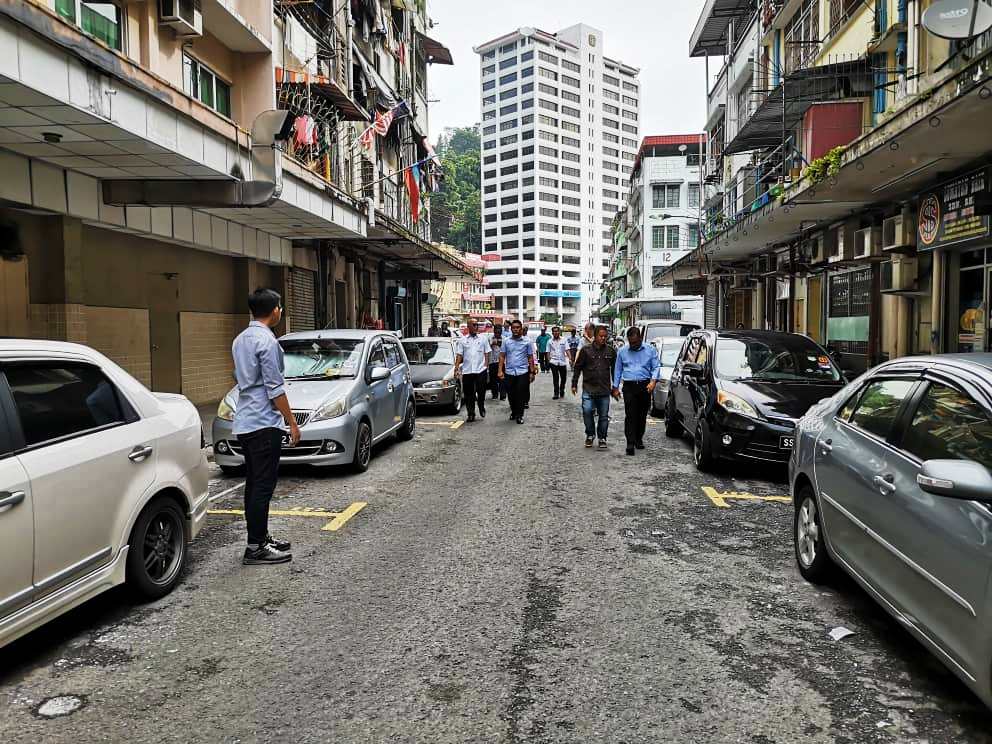 The joint team checking a backstreet in Sandakan town.

SANDAKAN: An inspection ‘walkabout’ by a joint team from the Highway and Public Utilities Committee (HPUC), Government Departments and agencies, local authorities and their respective contractors has uncovered some pressing issues that require attention in Sandakan town.

Taking advantage of the presence of representatives from all involved parties who turned up to attend their monthly meeting, HPUC Head Taren Sunil Manoharan invited them to take a joint inspection tour of several streets and back lanes in Sandakan town.

Starting off at Hotel Sandakan, the group met with Group Hotel Manager Senthil Ilangovan who briefed them on the efforts by the hotel to brighten and spruce up the vicinity.

Senthil pointed out some damaged and non-functioning streetlights in the area and the inspection team assured that they will seek approval to quickly get the lights replaced. Senthil also brought to attention the problems at the nearby Wisma Sandakan building which is now almost abandoned. He expressed his concern that the underground access to the building was dirty due to lack of maintenance. The place was also always damp or flooded and could be a breeding ground for mosquitoes.

“We appreciate the feedback from Senthil and will do the necessary to solve these problems,” Taren assured.

The joint team then made their way through several streets and paid special attention to the back-lanes, looking for issues of concern.

They found a manhole that was overflowing with filthy water and the dirty water has pooled over a large area surrounding the manhole. There were also a few abandoned telephone booths which needed to be dismantled and removed.

The inspection team also found drain covers at several places to be missing. Some of the drains also needed clearing because irresponsible people have thrown rubbish into them. There were some minor issues of cracked walkways where weeds have begun to grow in between the crevices. Damaged railings at some places will also require repairs for the safety of road users.

The round trip took them back to the Sandakan Municipal Council Building for their monthly meeting. They stopped by Wisma Sandaraya along the way.

“It was an opportune time to make the inspection tour because all the parties concerned had representatives at the meeting. Those present included Sandakan Municipal Councillors, HPUC members, SMC’s Town Cleaning Unit, People’s Development Officers (PPM) and engineers and representatives from the Public Works Department, Water Department, Drainage and Irrigation Department, Sabah Electricity Sdn Bhd and the telecommunication sector. Officers and representatives from the Office/Service Centres of elected Members of Parliament and assemblymen were also present,” noted Taren.

“With all the involved parties in attendance, we had an easier task during the meeting to identify and thrash out the various problems more efficiently and effectively. Each of us was able to know immediately our respective tasks and duties,” said Taren adding that he hoped future inspection visits will also involve all sectors concerned.