Saturday, May 15
You are at:Home»News»Young Sarawakian Aezzra Marvin Vincent recognised as Top in The World for Mathematics 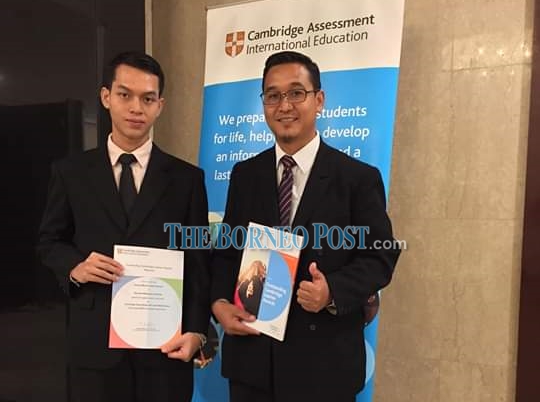 Aezrra (left) and his father Vincent after the award presentation.

KUCHING: A young Sarawakian brought honour to Malaysia after he was recognised as Top in The World for Mathematics by Cambridge Assessment International Education.

“I really like mathematics since I was young and I thank my parents for nurturing my interest in this subject.

“I do a lot of practice and this makes it easier to understand the lesson during classes,” he said when contacted yesterday. 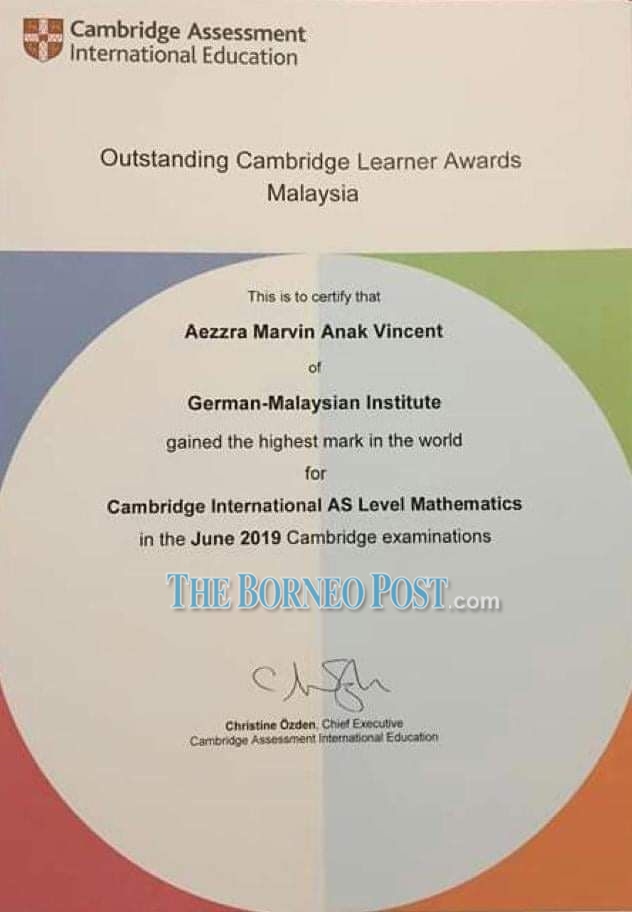 A close up view of the award.

He is expected to leave for undergraduate studies in one of the universities in Germany next March, where he plans to pursue a degree in chemical engineering.

“I have already completed my A-Levels at German-Malaysian Institute, and now I am learning German,” he said.

Aezzra, who is a Bidayuh (his father is from Kampung Giam and mother from Kampung Engkeroh), also called on fellow Sarawakian youths, especially those from the rural communities not to be afraid of mastering science, technology and mathematics (STEM) subjects.

“I would encourage them to do so, so that more of us can go on and further our studies in scientific and technical fields. By mastering STEM, we can develop more advancement in technology to improve people’s lives for the better,” he added.

Aezzra had scored 10A+ in the Sijil Pelajaran Malaysia (SPM) while studying at Maktab Rendah Sains Mara (MRSM) Kuching two years ago. He was also a top student at primary school, having scored 5As in Ujian Pencapaian Sekolah Rendah (UPSR) while at SK Lobang Batu, Serian.

“My goal in life is just to find way to give back to the community, by developing something new in any kind of sector,” said Aezzra, who listed music and reading as his favourite pastime.

Meanwhile, German-Malaysian Institute also took pride in Aezzra’s success and congratulated him on its website.

Majlis Amanah Rakyat (MARA) also congratulated Aezzra and hoped this success will inspire others. Aezzra is a MARA scholar.

He said Aezzra, who is second of three siblings, always aspires to excel in his studies.

“I was there during the ceremony where he received the award. It was a huge moment and our family are very proud is his success,” he said in a telephone interview.