KUCHING: Homeowner Sunny Wong is at his wit’s end after enduring the floodwaters which would enter his house compound on an almost yearly basis at Jalan Gold Jade here.

The city was hit by heavy rain this afternoon, resulting in many roads and housing areas being inundated in deep floodwaters.

He told The Borneo Post that his area would start flooding every time a heavy downpour went on for more than an hour.

He added that he was currently knee deep in floodwater when contacted by The Borneo Post.

“The water began to rise at about 4.15pm today and started flooding in from the road in front of my house’s compound to the middle section of Jalan Gold Jade.

“Vehicles driving through didn’t slow down, causing the flood water to flow faster into the compound,” Wong lamented, adding that he would get anxious and have sleepless nights if it began raining heavily at night.

While he has raised complaints with the Kuching North City Commission (DBKU), the council had apparently told him that they could not do much to help.

“I complained to DBKU because the main drainage around the area is causing problems and the drain in front of my house is silted with mud and so on.

“DBKU did study the flooding problem before and they raised the drain invert level higher from my road to Jalan Cross, that is why the flooding happens so fast,” Wong said.

“I even constructed door barriers around the house, which has helped slightly.”

Meanwhile, Stampin resident SL Chai lamented that the rainy season affects her daily activities, to the point where she cannot go to work or even leave the house.

“It gets very troublesome too, as I need to clean up after the flood. Especially at this time of year, when I need to do spring cleaning in preparation to celebrate Christmas and Chinese New Year,” she said. 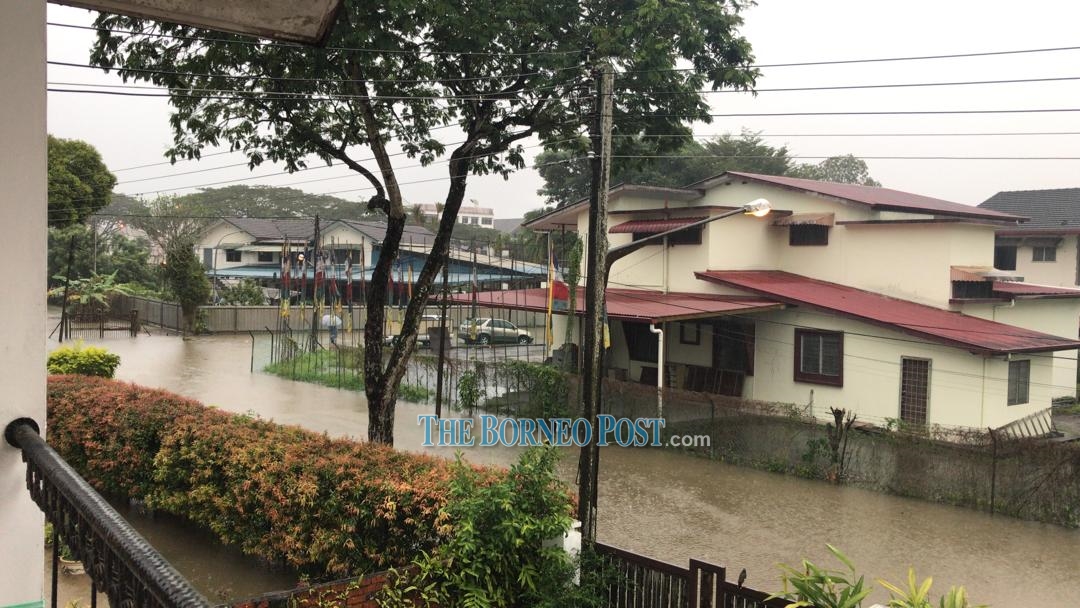 The access roads to the houses in Sia’s neighbourhood at Iris Garden is flooded in waist deep water.

At Iris Garden near Taman Timberland here, a resident who only wanted to be known as Sia said road access to his house and neighbourhood were submerged in waist deep water.

He said some neighbours attempted to drive their car through the flood waters but encountered engine problems as a result.

“The problem arises during the rainy season as the neighbourhood is a cul de sac (dead end street). Once it is flooded, everyone is trapped in their own homes,” he told The Borneo Post.

Sia said this has been occuring every time the monsoon season arrived.

“Although the monsoon drain has been deepened, I do not think the changes made are sufficient to cope with heavy downpours. The bottleneck during heavy rain results in flash floods,” he said. 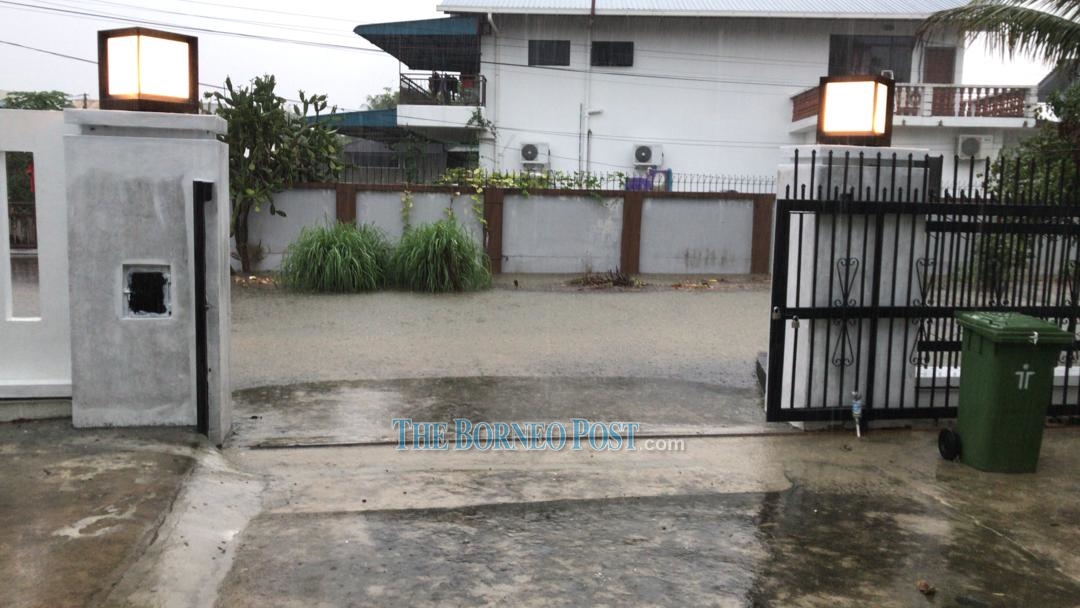 The road in front of Sia’s house at Iris Garden resembles a small river during the flash floods.

“The road was not traversable for over an hour for smaller cars earlier,” he said.

Ling said the flood happened every year and the worst it had ever been was when water levels rose to nearly three-and-a-half feet high.

“Some residents’ living rooms would become submerged during more severe occurrences, destroying their furniture and incurring damage to their property and vehicles,” he said.

He added residents here have grown exasperated with the flash floods because numerous reports have been made to the local government and agencies involved.

They were only told that the problem was with the downstream drainage system which directed the water to the Sarawak River.

“Personally, I think the problem could be reduced by raising the road level another two feet. So we really hope there is something government agencies can do to solve our problems,” Ling opined.

Motorist Then Chieng Ping said traffic was slower than usual during today’s rush hour because certain section of the roads were flooded.

“I was heading home from work at Sejingkat to Muara Tabuan through Jalan Setia Raja and the traffic jam was slower than usual because several sections on the road were flooded,” he said.