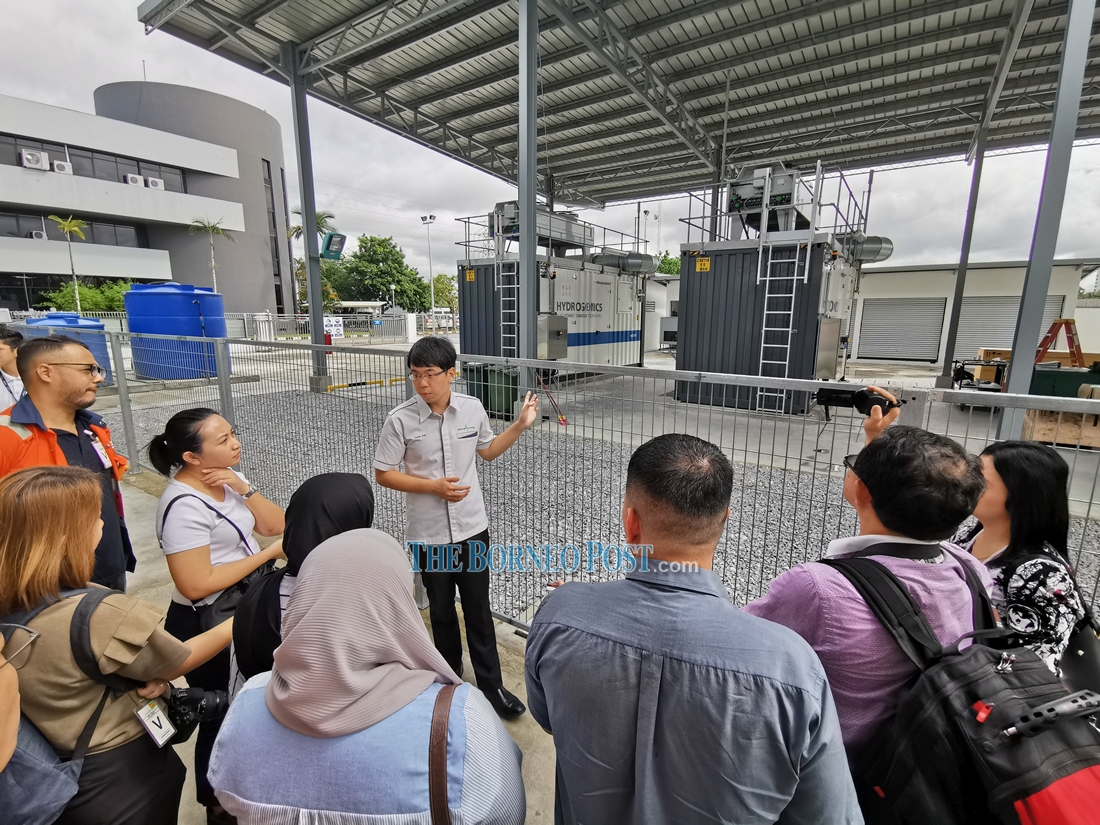 Members of the media being briefed by an SEB R&D team member outside the restricted zone at the facility.

KUCHING: Sarawak Energy Berhad (SEB) is in talks with Japan to chart a collaboration on hydrogen energy, which it deems to be the future of green and renewable energy.

“This is something we are currently talking to Japan about to see how we can work together,” he said when met during a media familiarisation trip to the first Southeast Asia’s Integrated Hydrogen Production Plant and Refueling Station here today.

Ting said SEB is committed to assisting the Sarawak government in exploring hydrogen technology towards developing a hydrogen economy.

He said they are working closely with existing technology providers to explore the technology and know-how.

“At this point in time, we are helping the state to explore the technology and know-how, and how to proceed to the next step.” 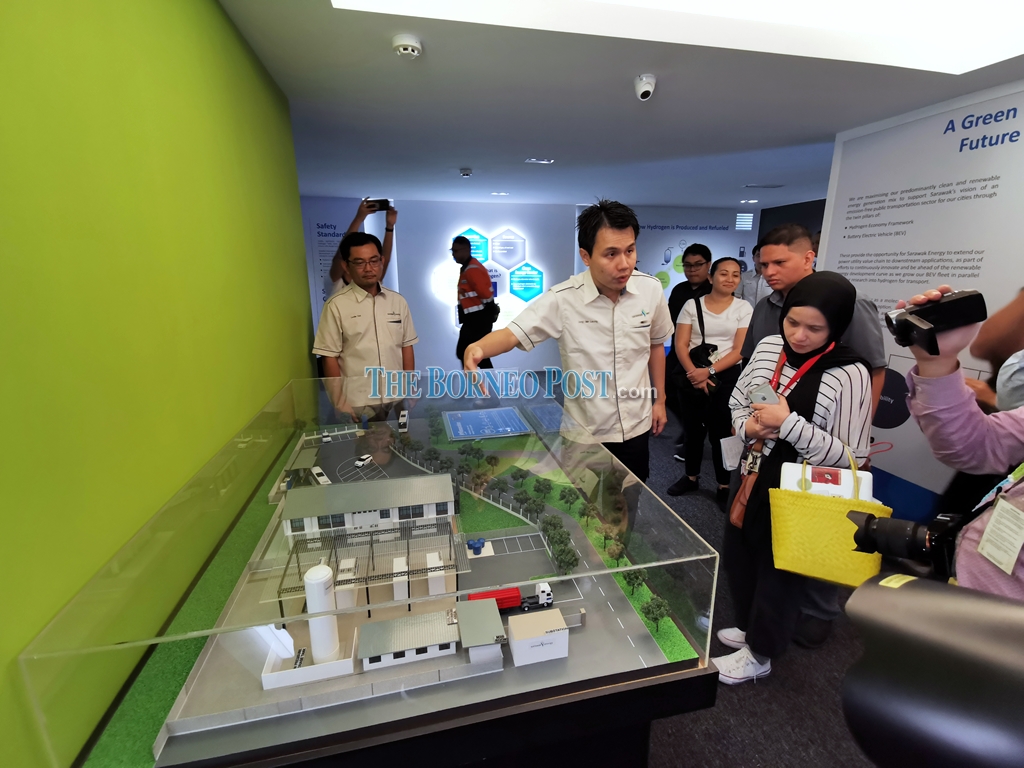 An SEB representative briefs the media on the layout of the facility with a 3D model.

He said hydrogen economy is something SEB and the Sarawak government are looking to develop for the state and that it would not just involve transportation.

He added that the initiative on R&D on hydrogen technology could be further explored for the state to eventually emerge as a hydrogen provider in the region.

“In terms of transportation, Chief Minister Datuk Patinggi Abang Johari Tun Openg said the other day that he intended to improve transportation and go for green energy initiatives to reduce carbon dioxide emissions in the future,” he said.

The facility, the first of its kind in Southeast Asia, can produce up to 130kg of hydrogen per day at a purity of 99.999 per cent.

Ting said the production plant in Brunei engaged a different type of process which does not produce hydrogen of the same level of purity as the facility here does.

He said they had visited Japan and other places which produced hydrogen prior to setting up the facility in Bintawa here. 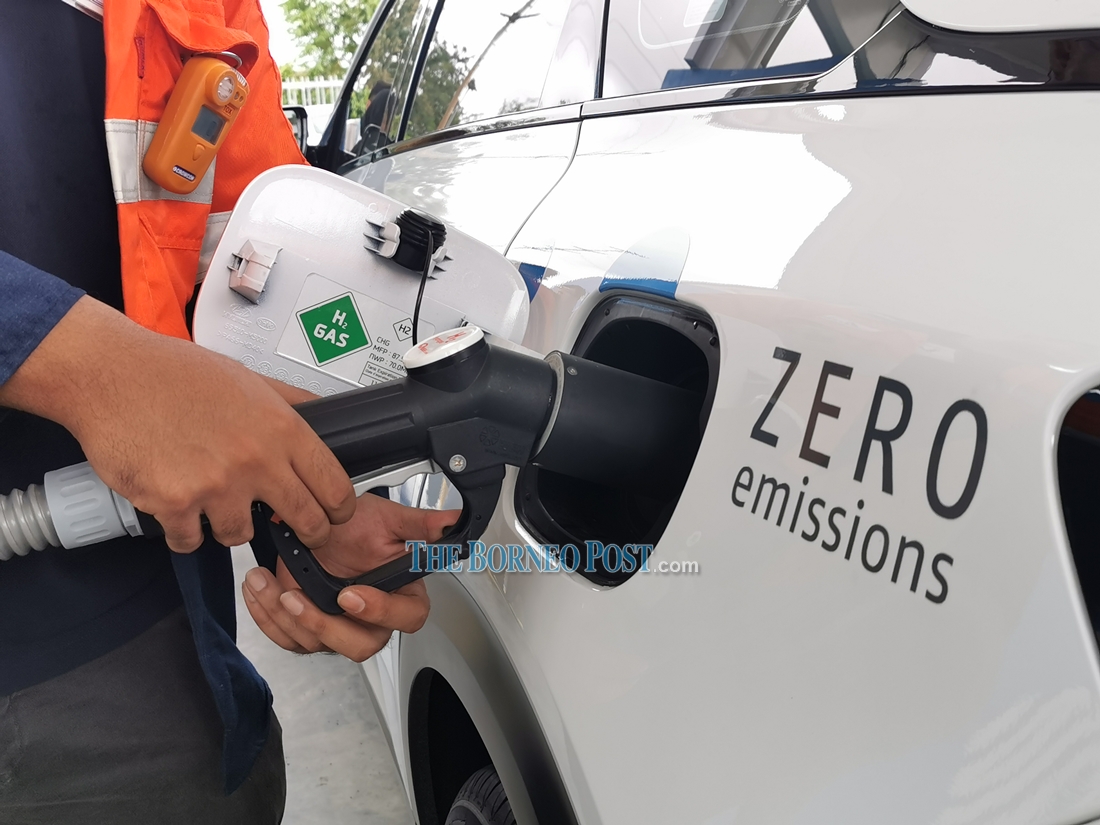 A hydrogen-powered vehicle fuels up at the Integrated Hydrogen Production Plant and Refueling Station. Photo by Roystein Emmor

“I was not personally in Paris, and a refueling station (like this) is used in the Eiffel Tower there; it goes to show how safe it is.

“The chief minister himself is driving a hydrogen car; we shouldn’t worry about safety issues,” he said, adding that they were also in the midst of figuring out what caused the recent hydrogen explosion in Europe.

He added that Japan intended to launch hydrogen buses during the 2020 Tokyo Olympics.

“Japan intends to roll out about 100 of hydrogen buses for the Olympics next year. Cars are more for private usage. I believe Toyota will launch it (the Mirai) when they are confident about it.

“In China, there are already hundreds of hydrogen buses on the road,” he said, stressing that society was gradually moving towards green energy.