Sunday, December 4
You are at:Home»News»CM: Set up task force to speed up perimeter survey for NCR land 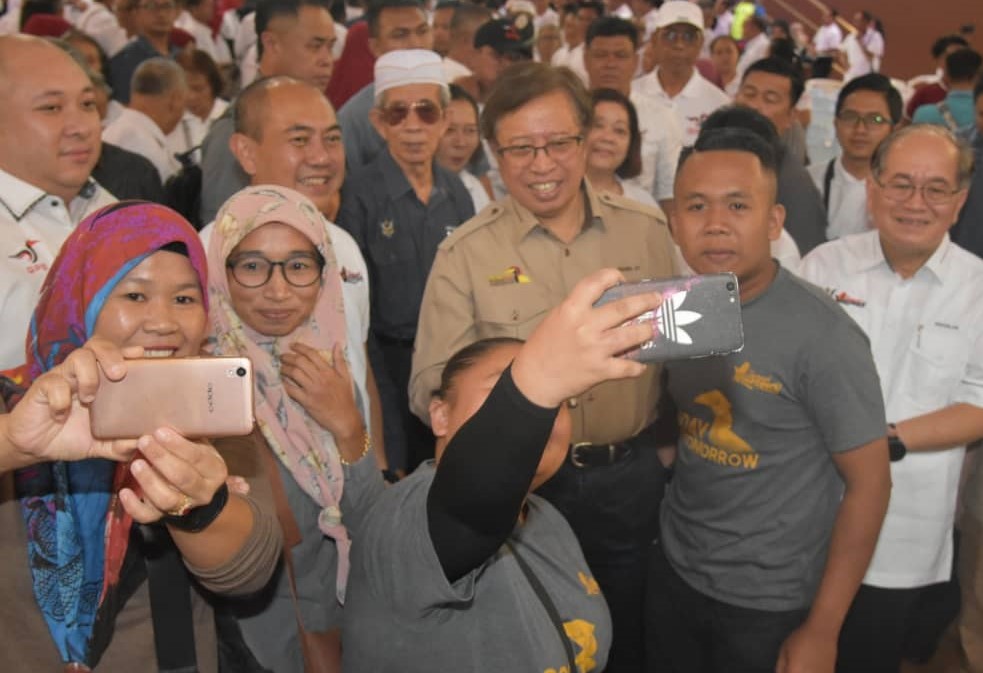 Abang Johari (third right) and Uggah (right) joining a wefie session with some of the locals before the townhall session in Betong this morning. – Photo courtesy of Ministry of Modernisation of Agriculture, Native Land and Regional Development

BETONG: Local community leaders are advised to set up a task force or committee to work together with the Betong District Office and the Land and Survey Department to speed up the perimeter survey for Native Customary Rights (NCR) land under Section 18 of the Sarawak Land Code.

Chief Minister Datuk Patinggi Abang Johari Tun Openg said for the local people to be able to work on various activities on their land such as farming, it is necessary for their lands to be surveyed and issued titles under Section 18 quickly so that they do not miss the opportunities brought about by the state government.

He said the local people could adapt the method being done by the people of Bau, where they set up a task force under the effort by the Dayak Bidayuh National Union (DBNA) and community leaders there to work together with the Land and Survey Department, and their perimeter survey were done quickly.

“I will contact the Land and Survey Department to adapt the model used in Bau for you and land owners here, so that you can survey your land under Section 18 which have been gazetted as NCR land.

“I agree to this proposal because it is faster (than doing alone individually). We will discuss more with the Land and Survey,” said Abang Johari.

He was responding to a request by one of the local people during the ‘Berambeh Ngan Abang Jo’ townhall session in Betong this morning.

The perimeter survey for those titles under Section 18 was done within four months thanks to the effort by DBNA and taskforce, he added.

“We have added 464 more surveyors for the Land and Survey Department, and will be dispatched to here to do perimeter survey faster.

“We will discuss with the Land and Survey Department with further details later,” he said.

On another issue, Abang Johari said the state government has pledged to provide a 20-seater bus for the Politeknik Metro Betong following a grouse brought up by one of the students there during the townhall session

The student suggested the state government to provide some sort of transportation for those undergoing practical training outside of Betong District.

To that, Abang Johari agreed to provide a 20-seater bus for the school, as long as the Education Department agrees.

The student also urged the state government to assist students under the B40 group in terms of accommodation because Politeknik Metro Betong has no hostel facility.

To that, Abang Johari said he will talk with Deputy Chief Minister Datuk Amar Douglas Uggah Embas, also present during the townhall session, on the proposal to convert old government resthouses in rural districts around the state, including Betong, into some sort of hotels with all the needed facilities not just for government servants travelling to the districts, but also for students who could not afford accommodation while studying.