Tuesday, August 11
You are at:Home»News»Sabah»Lahad Datu Hospital has specialists to treat cancer 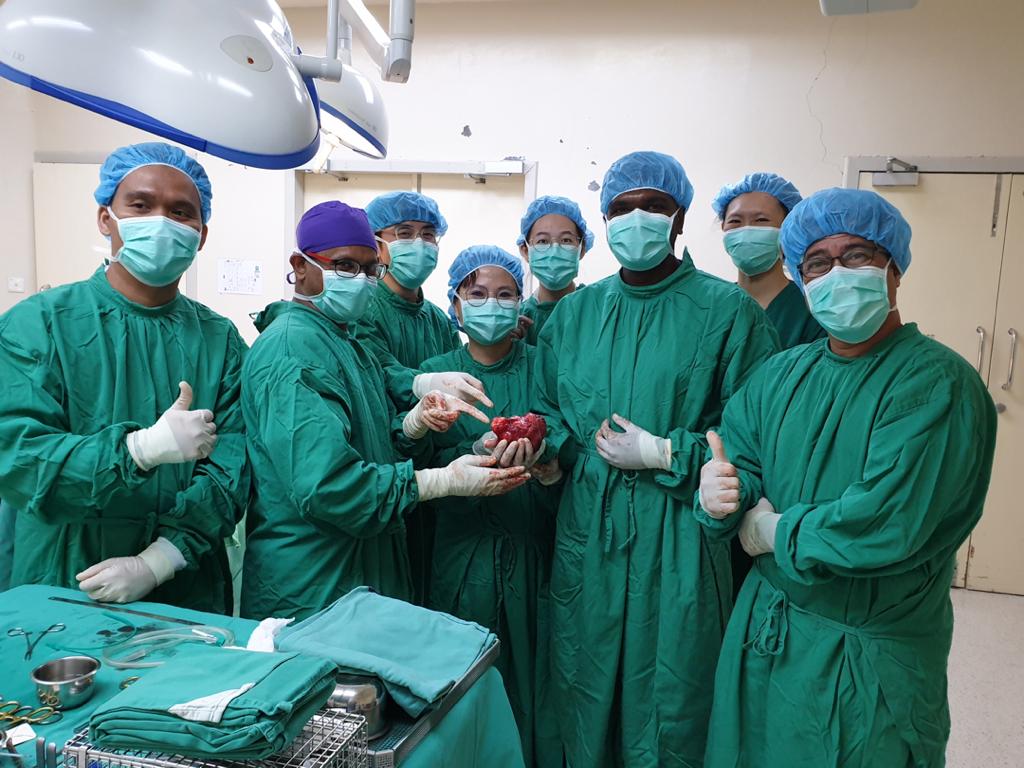 Group photo of the operation team including the surgeons, medical assistants and anaesthetists in Lahad Datu Hospital.

LAHAD DATU: Having the opportunity to enjoy his favourite meal again was the most heartwarming part of a story from a 14-year-old boy who suffered from Rhabdomyosarcoma of Right Buccal Mucosa.

Al Basil Seid, the second child of six siblings, said he was feeling content after the cancer inside his mouth was removed about three weeks ago.

He had difficulties to eat and his family members, especially his father, had to insert food into his mouth.

“I really like to eat meat, especially the traditional Suluk food ‘Tiulak Itum’, but I had to stop eating it ever since I was diagnosed with cancer inside my mouth.

“This cancer did not have profound effect on me, but it had a huge impact on my family as it had become a burden to them,” he said.

According to Al Basil’s father, Seid Hamin, 36, who is a plantation worker, they had to sell their car and jewellries to cover for his son’s medical expenses.

Seid however said it did not really matter as he was only concerned about his children.

“We also received aid from the Welfare Department and are very thankful for the assistance as well as support given by the hospital that helped us go through those difficult times.

“I work harder so that I could earn more money to cover for all the expenses, what is more important is that my son can now lead a normal life,” he said when met while accompanying his son at the hospital.

According to Al Basil, he began to realize about the cancer in April this year and it was continuously growing.

His father later took him to the hospital and he was prescribed with some medication but the cancer was still actively growing.

The Ears, Nose and Throat (ENT) as well as Oral and Maxillofacial departments of Lahad Datu Hospital decided to conduct an operation to remove the cancer on November 29.

Today, about two weeks after the operation, Al Basil is getting better and his condition not only pleases his family but also the hospital.

“I am happy and thankful to be given opportunity to live my life without the cancer and I am eager to help my family especially my father, while being able to eat my favourite food.

“I do not have words to describe how thankful I am to the Lahad Datu Hospital, especially the two departments and all the staff who worked very hard to ensure that I could get better,” he added.

Another patient, who successfully had his Pleomorphic Adenoma of left submandibular gland removed at Hospital Lahad Datu, Sabara Tayang, said he was fine living with the tumor although it affected his movement.

Sabara said he first noticed the problem in 2012 but did nothing but kept focusing on his work as an oil palm fruit harvester.

The father of five said he was doing fine despite the tumor getting bigger and bigger from time to time.

The situation changed when a doctor from the Oral and Maxillofacial Department noticed the growth and told him to go to the hospital. He was later brought to hospital by his employer.

“Despite his condition, he still gives 100 per cent to his job and never complains. We are concerned about his condition, but he was very positive about it and told us that there was nothing to worry about.

“Once he was brought to the hospital, we decided to help the best we could because he is a good worker who has served the company for five years,” he said.

Sabara is happy to have his tumor removed as he can now feel at ease and more comfortable.

He is grateful that the surgery went well. He never expected that such surgery could be done at the Lahad Datu Hospital.

“All the doctors here, especially in these two units are very helpful. I am so touched with their commitment and support,” he added.

Al Basil and Sabara were among the patients who had undergone surgeries at the Lahad Datu Hospital under the ENT and Oral and Maxillofacial departments, which began to conduct such operations this year.

Lahad Datu Hospital director Dr Ridwan Bin Hashim said Otorhinolaryngology specialist Dr Tan Shi Nee is responsible in performing surgeries as well as inspecting the patients of ENT Units with the help from other doctors as well as medical officers.

Dr Ridwan said Lahad Datu Hospital shares the service of ENT specialist with Tawau Hospital under the Cluster Hospital initiatives by the Ministry of Health.

He said Dr Tan will divide her time to serve in two hospitals and during her absence here, the trained medical officers will be responsible to inspect and determine the patients’ condition before taking further action.

“We face some constraints such as the lack of specialists. The existence of this cluster programme is great but we still need in-house specialist so that waiting time, surgery and procedures could be shortened in order to provide better health service to the people,” he said.

According to Dr Ridwan, Lahad Datu Hospital is equipped with various facilities and can perform surgeries, provide treatments, diagnoses and others.

He said although there are some constraints such as lack of equipment, staff and others but teamwork among the hospital staff is very high and they are always striving to provide the best for patients.

“We believe that the shortcomings and weaknesses could be addressed and improved in line with the Ministry of Health’s plan to provide a more efficient and effective health system to the people,” he said.

In the meantime, Dr Ridwan said prevention is always better than cure. The people should not wait until they are infected by diseases and then come to the hospital.

He said they should voluntarily come and undergo a screening test so that if there is have any health problem, it could be treated early.

“We have a health clinic where the public can undergo health screening or consultation, do not be afraid, we are here to help,” he said.

“We want the people to know that they no longer need to go to other hospitals for treatment.”

Dr Tan said the service provided in Lahad Datu Hospital not only could lessen their times and costs but could also avoid patient overflow at the other hospitals.

“I am designated to cover two districts under the cluster programme but I am more frequent here at Lahad Datu as Tawau Hospital has another surgeon that can do the same,” she said.

She also said that ENT Department received assistance and support from the director and hospital which motivate them to provide better service to the patients.

Oral and Maxillofacial surgeon, Dr Rubinderan Muthusamy said the way the patients are consulted is important for them to better understand their condition as patients could get misunderstood.

He said it is true that some of the patients are afraid of such major operation, especially when they are told about the complications of the operation.

However, he said most of the patients are more at ease when they are told that the risks would increase if they refuse to undergo operation.

“From my experience, patients are afraid as they are not informed about the benefit of the operation but focusing on the risks. That is why consultations are important.

“The patients’ family also play an important role in this matter. They should provide support to the patients so that they will not be afraid to undergo operation,” he said.

In the meantime, Dr Rubinderan also said that people should also help to create awareness about the treatment provided by the hospital and not to rely on traditional treatment.

He said some patients admitted that they had consulted the service of traditional medical practitioners but did not bring any good, instead they would have to cope with the costs.

The hospital and the staff, on the other hand, always strive to provide better service to the people, he said.