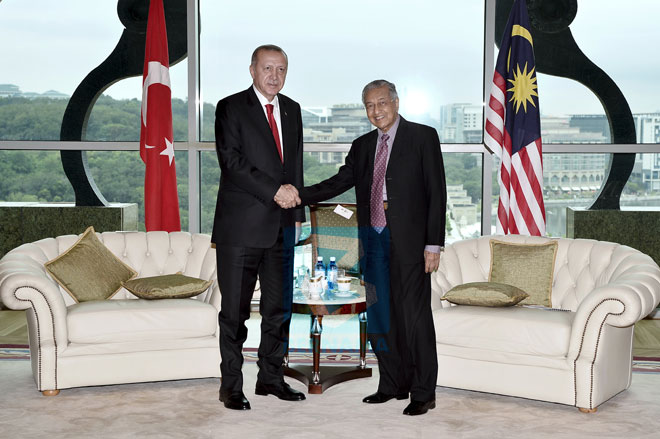 The 45-minute discussion was held on the sidelines of the Kuala Lumpur Summit (KL Summit) 2019.

After the talks, Dr Mahathir and President Erdogan also witnessed the exchange of several instruments of agreement between governments and businesses of the two countries in various fields.

These include an agreement on cooperation in the fields of science and technology between Malaysia and Turkey.

Thirteen instruments of cooperation between business entities of the two countries in the field of defence were also exchanged during the ceremony.

Among the instruments were the memorandum of agreement (MoA) between Sapura Secured Technologies Sdn Bhd and Aselsan Electronic on the Domain of Military Communication; and memorandum of understanding (MoU) between Havelsan Hava Electronic and AMP Corporation Sdn Bhd on Coastal Radar Surveillance.

The Turkish President arrived in Malaysia earlier yesterday to attend the KL Summit 2019.

He will be joining Dr Mahathir, who is also the KL Summit chairman, and a number of other Muslim leaders at the gathering in the Malaysian capital taking place from yesterday to Saturday.

The KL Summit aims to, among others, deliberate and find new and workable solutions to problems afflicting the Muslim world.

Bringing together Muslim leaders, intellectuals, scholars and thinkers, the gathering is also eyeing to contribute towards the improvement of the state of affairs among Muslims and Muslim nations besides seeking to revive the Islamic civilisation. — Bernama