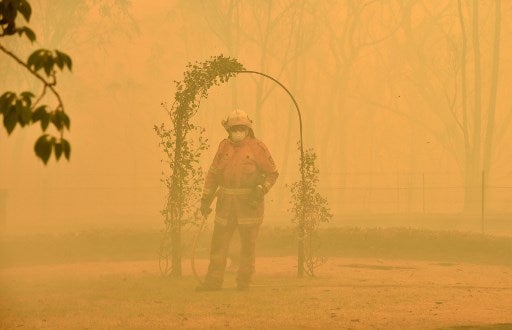 A fireman fights a bushfire to protect a property in Balmoral, 150km southwest of Sydney. AFP Photo

Australia set a record for its hottest day ever for a second straight day, with an average national maximum temperature of 41.9 degrees Celsius, a full degree higher than the previous mark, officials said on Thursday.

The Bureau of Meteorology said the new nationally averaged maximum was reached on Wednesday, topping the 40.9 degrees hit on Tuesday, which beat the previous record of 40.3 C in January 2013.

As the heatwave continued, Thursday saw the highest December temperature ever reached in Australia when the West Australian town of Eucla hit 49.8 degrees celsius.

The previous hottest December day was 49.5 degrees celsius in Birdsville, Queensland, in 1972.

The heatwave has exacerbated an unprecedented, drought-fueled series of bushfires ravaging large areas of Australia. – AFP