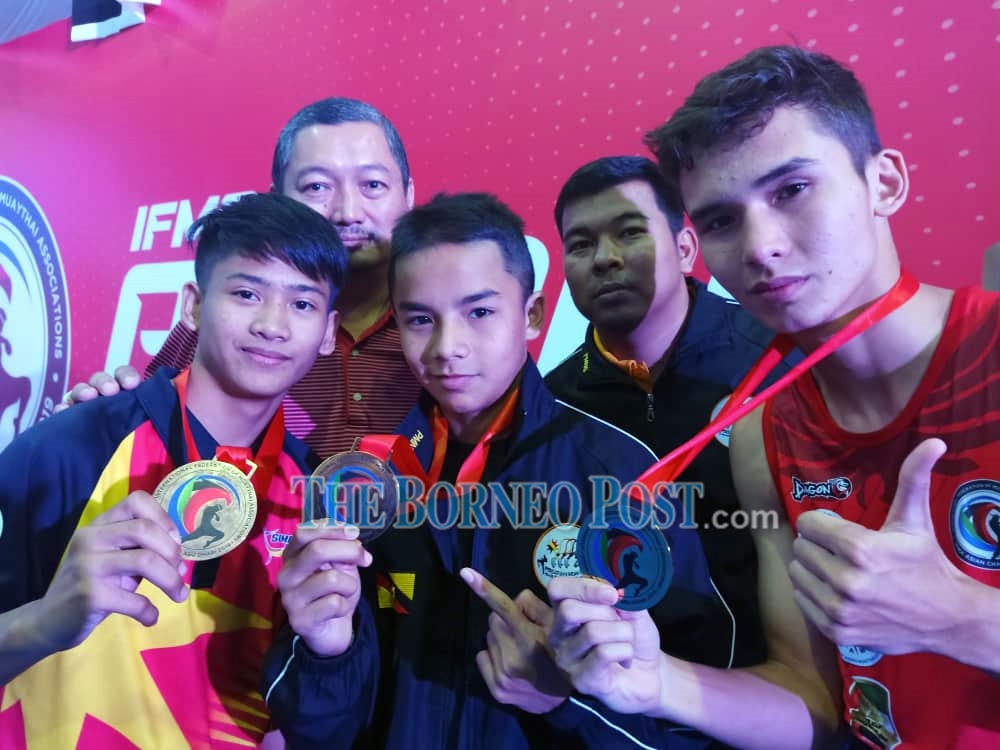 (Front, from right) Elias, Johan and Ayu Addyqa show their respective medals. Behind the boys are Jumaat (left) and their coach Mohd Azan.

Elias, 17, exhibited a high-spirited performance in the Youth 57kg bout, earning him the gold medal.
Even more impressive, the young Kuchingite was also honoured with the championship’s ‘Spirit of Muaythai Special Award’ during the IFMA gala dinner.

Elias received the award from UAE Muaythai and Kickboxing Federation chairman Abdullah Saeed Al Neyad, who is also vice-president of Federation of Amateur Muaythai of Asia (FAMA) – the host of this year’s Asian meet.

Meanwhile, pint-sized Johan scored in Boys 44kg bout – a golden feat that matched his big brother’s.
The Asian gold medal capped off a great competitive year for the 13-year-old, who also excelled at the IFMA World Youth Championships 2019 held in Antalya, Turkey in October.

Fellow Sarawakian, Ayu Addiqa Azmi also presented a commendable show in the Youth 45kg bout, from where the 17-year-old collected a bronze medal.

The three young Sarawakians were among the nine-member Malaysian team taking part in the Asian tournament. 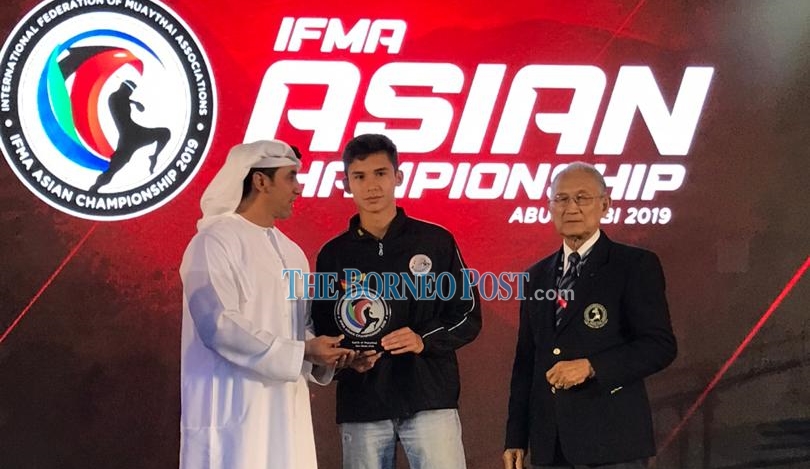 In a WhatsApp message sent to The Borneo Post today, Sarawak Muaythai Association president Jumaat Ibrahim could barely contain his excitement over the commendable achievement by the Malaysian fighters at the Abu Dhabi meet, especially the feats of the three Sarawakian youths.

“I’m just so proud of them – they are the true spirit of Sarawak muaythai. As such, I hope that Sarawak muaythai would continue to reach greater heights and produce more world-class champions.

“I must say that none of this would be possible without the solid support and encouragement from Sarawak’s Youth and Sports Ministry (KBS), the Sarawak State Sports Council (MSNS) and other sports authorities. We’re thankful for the trust given to the association to manage this sport in Sarawak,” he said.

Over 600 representatives from 35 countries converged on Abu Dhabi for the five-day Asian championships, which concluded last Saturday.