Saturday, May 15
You are at:Home»Business»BizHive»Year in e-commerce 2019

It is undeniable that e-commerce has grown into one of Malaysia’s more significant industries to date. According to the Department of Statistics Malaysia, income from e-commerce transactions between 2015 to 2017 has grown by six per cent annually over the two years, with almost RM50 billion increase in revenue.

In addition to this, Statista unveiled that the Malaysian e-commerce market for 2019 has generated revenue of US$3.68 billion, predicting the annual market growth to reach to 11.8 per cent by the year of 2023.

As we are getting to the end of this year, this article recaps the key highlights and insights in the e-commerce sector throughout 2019:

Striving to become the leader of e-commerce in Malaysia, Shopee lead the industry with the highest downloads on mobile applications based on iPrice’s latest 3Q report.

In addition, Shopee also secured the first position with the most visits on the website.

According to Shopee, it successfully doubled the number of application downloads within a year through various marketing initiatives such as creative branding, brand tie-ups and the word-of-mouth by Malaysians.

Also a major player of e-commerce in Malaysia is Lazada, holding the top position with highest monthly active users of mobile applications in the period of 3Q19.

According to chief business officer, Kevin Lee, the achievement of its current position was possible because of their strategy in creating engaging seller community which leads to a significant growth in the number of sellers.

He further mentioned that building the seller community enable them to create more opportunities for various experts and entrepreneurs in diverse region to enhance themselves through analytic tools and training.

On the other hand, statistics found that China-based app Taobao was highly popular in Malaysia in 2019, ranking 3rd in monthly active users.

Realising its potential customer coming from the Malaysian market, Taobao is currently working to expand its number of customers in Malaysia through one of the key efforts which is the launch of Taobao offline store on November 29.

This is viewed as a crucial step made by Taobao to widen its reach and upgrade its services to serve the customers.

The availability of physical stores aims to showcase popular products and introduce new ones that appeal to local consumers, also, it allows customer to have hands on experience of the product before deciding to purchase on its online platform.

All data about mobile application and website performances were based on iPrice’s proprietary research and external resources such as partnership with AppAnnie. Information about web visit were derived from SimilarWeb. 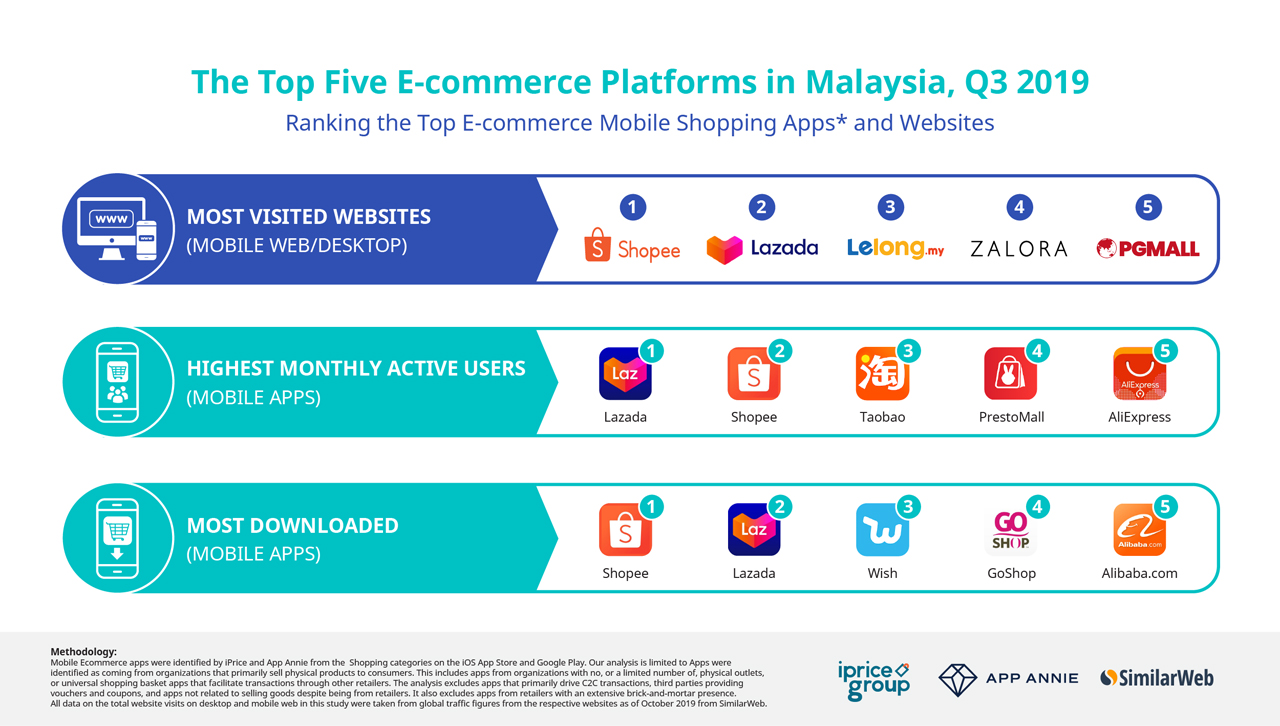 Fall and rise of e-commerce players

11street, one of the big players in e-commerce recently announced its rebranding as PrestoMall. Previous reports revealed that Axiata Digital had sold assets to Singaporean venture capitalist, Pegasus 7 Ventures including its entire stake in Celcom Planet Sdn Bhd.

Due to suffering great losses of almost RM400 million throughout 2015 to 2017, former operator of 11street, Celcom Planet Sdn Bhd had to sell 11street to new companies.

Rebranding as PrestoMall, they are now part of Presto and will be operated by Presto Mall Sdn Bhd, a social marketing platform that offers a variety of lifestyle and convenient features; including eWallet function called PrestoPay.

As part of the rebranding process, the additional feature of deals page for promotional deals is created.

Popularity of online sale event 11.11 or also known as Singles’ Day this year is on an all-time high. In a recent analysis, data revealed that consumer spending increased by 13 per cent on 11 November as compared to previous year. In 2019, consumers spent an average RM277 in each online transaction.

On the other hand, the recent 12.12 sale revealed Malaysians spent at about RM244 within 24 hours of the day. This figure is a 56 per cent increase from 2018, indicating that there were more Malaysians buying items nearing end of 2019.

Data records that most money spent during 11.11 Sale was on Electronics and Automotive Items. Categories like Kids and Toys and Home and Living were also recorded to have the highest growth of consumer average spending.

Bright outlook for 2020 and beyond

Exciting times in the e-commerce industry will be coming in the next few years. According to report by Google, Temasek and Bain & Company about Malaysia Internet economy, it illustrates that Malaysia e-commerce will grow significantly reaching US$11 billion economy by 2025.

Besides, Online Travel will continue to grow and predicted to achieve US$9 billion economy by 2025. Figures also shown that growth in other sector such as Online Media and Ride Hailing will be gradually moving upward.

Observing the trends and improvement made by e-commerce players, it is possible to envision greater and a lot more development in the sector of e-commerce. There is greater opportunity for existing and new business to engage in the internet economy opportunity in the future time.