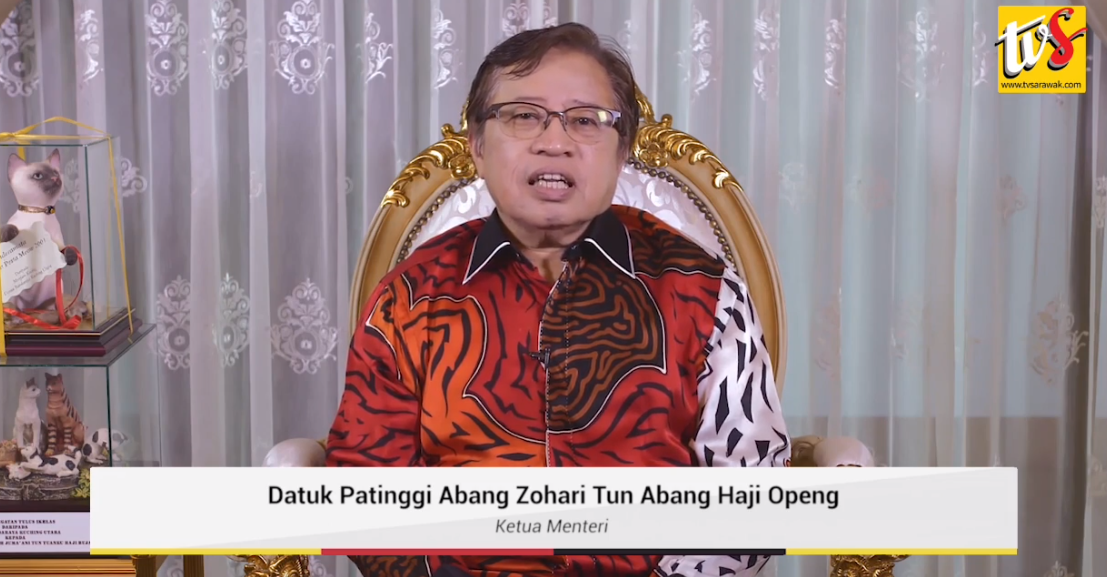 KUCHING: The Sarawak government will continue to take steps to ensure investment, consumption and domestic savings continue to be strong so that the state can sustain its growth and provide the right ecosystem to upgrade the living standards of its people.

This was the assurance given by Chief Minister Datuk Patinggi Abang Johari Tun Openg who pointed out that with all the various initiatives in place, Sarawak can look forward to the year 2020 with optimism.

“We are fully aware of the fact that we should always be mindful of the three important aspects of managing an economy namely, savings, consumption and investment in order for the state’s economy to be healthy and robust.

“To be strong economically is the way forward to build a prosperous Sarawak that all Sarawakians can be proud of and empower us to do many things for the benefit of our people,” he said in his Christmas message today.

He said that Sarawak, blessed with abundant resources with its land size that’s almost as big as Peninsular Malaysia, has tremendous potential to be an economic powerhouse not only in Malaysia but also in the region.

As such, he said the state government would have to invest heavily in upgrading the state’s infrastructure to harness this potential.

“A number of large bridge projects have been launched this year across the major rivers to plug the missing links in our connectivity system. When all these bridges are completed road travel from Sematan to Miri, Limbang and Lawas will be so much easier,” he said, adding that good connectivity was a pre-requisite to a strong economy.

Apart from that, he stated that the state’s agricultural transformation programme also hinges on good infrastructure especially in the hinterland of the Regional Corridor of Renewable Energy (Recoda) and the northern part of the state.

“A total of RM4.5 billion will be allocated to develop the infrastructure in these interior areas that include small airports.”

Abang Johari also stressed that though Sarawak was rich in resources, this does not automatically make the state rich unless there is a well-structured plan to ensure that these resources are used optimally and sustainably to build the economy.

“We have oil and gas, land and water and the forest, and coupled with human capital and a well-thought out plan we have all it needs to be a developed state by the year 2030.”

He said Sarawak was now in complete control of its power resources having taking over the Bakun Hydro Dam from the federal government in 2017 and this has allowed the state government to better manage the state’s power generation to power the energy-intensive industries, especially in Samalaju Industrial Park in Bintulu.

After the acquisition of Bakun Dam, he noted that this was followed by the formation of the Development Bank of Sarawak (DBOS) that has given the state the flexibility to fund strategic projects without having to borrow from outside sources.

“Our normal yearly budget is not quite sufficient to fund extensive infrastructure development to increase road connectivity, especially in the interior areas of the state and DBOS have allowed us to source for funds internally.

“The extensive plan of infrastructure development in Ulu Rajang, the highland areas and the northern region is made possible with the financial facilities offered by DBOS. Therefore, I consider it lucky that we could have DBOS approved by Bank Negara in record time in order to facilitate our development,” he said.

Abang Johari also mentioned that in order to have the regulatory power over Sarawak’s oil and gas resources based on its authority under the Oil Mining Ordinance 1958 (OMO1958), Petroleum Sarawak Berhad (Petros) was set up to be the state’s flagship in furthering its participation in the upstream and upstream activities of the oil and gas industry in the state.

“Very soon as part of its growth, Petros will be tasked with the managing of the domestic gas business in the state that is now under Petronas. The next few years will see more involvement of Petros as more investments are expected in the oil and gas and petrochemical industries in the State.

“Being more aware of our rights led us to recognise our power to introduce new revenue streams or revenue re-engineering if you like. Starting this year, we are charging 5 per cent sales tax on oil and gas products for export that brings home a revenue of about RM3 billion yearly,” he said.

He added that from next year onwards, the state government will also be charging a one percent sales tax on aluminium products for export.

“This is much in the manner of what we are currently charging the same quantum on palm oil thus treating fairly our export products.

“This will bring in more revenue that will be channelled back to the people in the form of infrastructure and utilities projects.”

He said the Sarawak government, as a government concerned with the difficulties faced by the people, has implemented a number of programmes and initiatives to help reduce the financial burden of the people particularly the less fortunate.

“Starting Jan 1 next year, electricity connections worth up to RM5,000 will be borne by the government and if the cost is over RM5,000, the remainder will be given 70 per cent discount.

“I am confident that this initiative will enable the less fortunate to enjoy electricity supply to their homes.”

Apart from that, he said the government will also raise water bills of up to RM5 equivalent to 11,300 liters of water from Jan 1, 2020, which is expected to benefit 600,000 households statewide.

“In addition, the State Government will provide RM450 to mothers who give birth next year to ease their financial burden when they are on vacation. It is hoped that this cash aid will ease the financial burden of those who need to buy a variety of necessities after delivery,” he said and added that this is another relief for mothers besides giving RM1,000 to every child born on Jan 1 this year.

In wishing Sarawakians in the state and abroad a Merry Christmas, Abang Johari also called on the people not be distracted by events and happenings outside Sarawak that tends to divide us for as the saying goes ‘united we stand divided we fall.’

“Let me give the reassurance that our state government is one that is committed to being fair to all its people besides Muslims,” he said, noting that the setting up of Unit for Other Religions (Unifor) is testimony to the state’s commitment to help other religions besides Islam.

“As we embark on the journey of leaving 2019 and moving on to 2020, I urge my brothers and sisters to continue to strengthen our commitment to contribute to the harmony and progress of Sarawak in whatever capacity or role it may take.

“As always and true to the spirit of our unity in diversity, people of different religious and racial backgrounds are also sharing in the fun and joy of Christmas as a manifestation of their deep respect for the beliefs, custom and tradition of their fellow Sarawakians.”