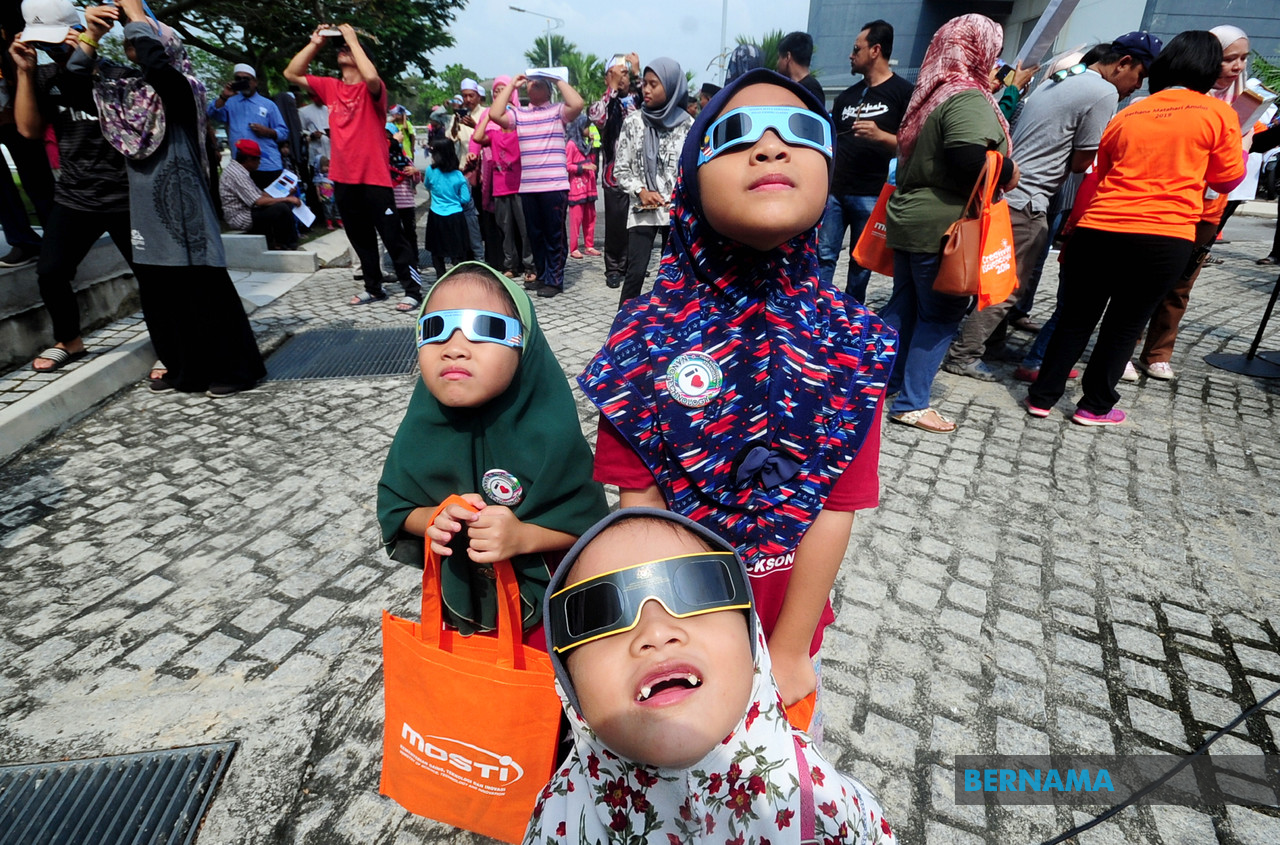 Many parents also took the opportunity to introduce the phenomenon to their children. Bernama Photo

KUALA LUMPUR: The annular solar eclipse phenomenon which took place in Malaysia today provided an amazing experience for the younger generation about astronomy and the universe.

An annular solar eclipse occurs when the Moon covers the centre of the Sun and this leaves a brilliant ring of light around the moon in what observers call a ‘ring of fire’.

From Perlis to Sabah and from east to west, the annular solar eclipse, occurred from 1.21 pm to 1.23 pm in Tanjung Piai, while in Serian, the phenomenon lasted about four minutes from 1.46 pm to 1.50 pm.

Not only researchers and scientists were seen at several places observing the solar eclipses, but many parents also took the opportunity to introduce the phenomenon to their children.

In Taman Negara Johor Tanjung Piai, near Pontian, a lecturer couple Farszly Rahim and Dr Sharina Abu Hanifah said they took the opportunity to introduce their children to science.

“We used to talk about science with the children and they often followed us to do fieldwork. Even though they are young, they are familiar with science experiments and they are fond of insects and everything else in space,” said Sharina, a chemistry lecturer at Universiti Kebangsaan Malaysia (UKM).

Farszly, 41, is a lecturer in Biology at Universiti Sains Islam Malaysia (USIM).

For science officer Syahril Hirman Azmee, 40, it was an opportunity to study an important electromagnetic wave that could be used for weather and space studies.

“We prepared for two weeks to come here. We focussed not only on the study of astronomy but also on the environment,” said researchers from the East Coast Environmental Research Institute (ESERI) at Universiti Sultan Zainal Abidin, Terengganu,

Meanwhile, at the National Planetarium in the capital, a visitor, Arnie Rohayu Rosli, 40, said it was a long awaited ‘ring of fire’ phenomenon for him after he observed the solar eclipse firsthand in 1998.

“I’ve been waiting a long time (for the annular solar eclipse phenomenon). Coincidentally, it’s school holidays so I took this opportunity to bring the children to watch the solar eclipse.

“So, this is a great opportunity for my children because it might create a deeper interest in science for them,” said Arnie, who lives in Salak Tinggi, Kuala Lumpur and has three children.

For Universiti Teknikal Malaysia Melaka (UTeM) student Mohammad Amirul Amin Mohammad Zainol, 21, he said the incident was a memorable one as this was the first time he witnessed such a natural phenomenon.

“Before this, I have seen the lunar eclipse with the naked eye, this is the first time I saw a partial eclipse of the sun and I was amazed by the power of the Almighty,” he said.

Nazirah, 39, from Manggatal said she took the initiative to expose her daughter to the natural phenomena to further enhance her knowledge of science from a young age.