Saturday, May 30
You are at:Home»Columns»Just another point of view»Celebrating our diversity through mixed marriages

I AM a proud descendant of a mixed marriage. Both my grandmothers were Peranakans, who were native-born persons of mixed local and foreign ancestry, usually domiciled in Malaysia, Singapore, and Indonesia. My paternal grandpa was Hokkien Chinese; maternal grandpa Teochew Chinese.

From as early as the 16th century, when migrants travelled from their home country to Malaya and the Borneo states, some began to adopt the local culture and intermarried with the locals. Indeed, there are many tales that attempt to trace the origins and identity of this unique hybrid culture termed Peranakan. Some folklore suggests that Peranakan roots began with a princess from China, who married a local prince. Historically, however, the term Peranakan was used to refer to a number of different ethnic and cultural groups in the region. The root word for Peranakan comes from the Malay and Indonesian word anak or child, referring to locally born descendants.

Today in our extended Ong family we have many mixed marriages encompassing all the major ethnic races in Sarawak, including but not exclusive to Malay, Iban, Bidayuh, Kenyah, Kelabit, Indian, Eurasian, Caucasian, Japanese, Siamese, Indonesian, Filipino, as well as some I may have inadvertently forgotten. 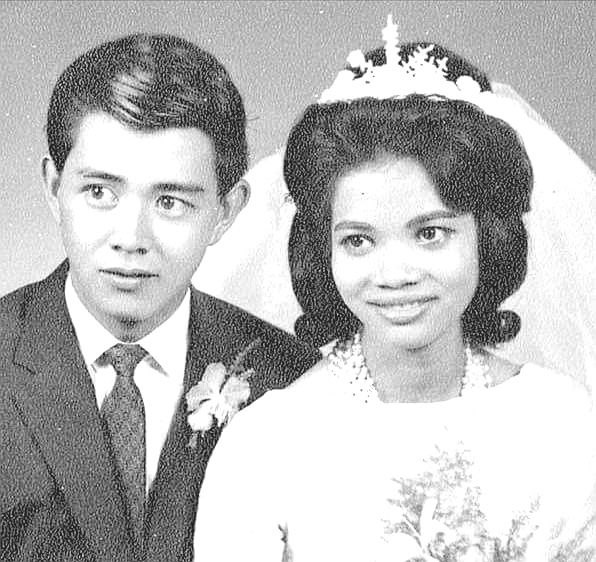 Our first family member who landed in Sarawak was Ong Ewe Hai, who had arrived in 1846 during the days of James Brooke. Today I am a fifth generation Hokkien Ong from Xiamen province in China and there are now nine generations of Ongs in this country!

Today’s column was inspired by a mixed marriage ceremony, which I was invited to attend a fortnight ago by Isabella Wong and Jawing Nayang of their daughter Sherene to Andy Chung. Isabella herself is Melanau, Foochow, and Hakka; and her husband is Bidayuh. Andy is an Iban.

At the grand wedding banquet, the newlyweds looked splendidly beautiful and handsome costumed up in their own ethnic attire and headgear and other paraphernalia! The guests were a microcosm of all the various different races in Sarawak – seated with me at my table were relatives of the bride, who were also from families of mixed marriages – some had returned from overseas in the UK and Australia, some from Sibu, and other outstation places. It was such a wonderful feeling and the atmosphere and ambiance of love, belonging, and happiness was thick in the air – rejoicing at another family member being joined in matrimony.

I recall with much fondness that it was in the mid-1960s that we had our very own mixed marriage in my immediate family. I believe it was between my first cousin Bobby, who had married his love Felly Jaboh, a Bidayuh nurse from Kampung Quop; and this was followed by another cousin Charles, who had married Rose Bennet, a lovely Iban maiden from Binatang (now Bintangor).

Fifty over years ago, marriages such as these were deemed to be rather rare up till then; but today I must admit that I have totally lost count of the number of mixed marriages in my family. That in itself is such a wonderful thing. The elephant in the room has always been the issue of differing religions, rather than the diverse cultures and upbringing – but this issue has been overcome in all cases and always resolved to the satisfaction of all parties.

It is my personal belief that newlywed couples here, if they are from one of the many racial backgrounds, be it Chinese, Malay, Iban, Bidayuh, or Eurasian do not face quite as many different cultural difficulties compared to those who had married outside this Sarawak circle. By this I mean marriage to a Caucasian or someone from say India, Japan, the Americas, Africa, or elsewhere. First of all, there will be the obvious language barrier even if both communicate fully in a common tongue like English. Then there’ll be the obvious different upbringing and cultural behavioural quirks and expectations. Initially most of these differences are coloured by the strong emotive feeling we call love and indeed strangeness and weirdness can oft times be exciting and invigorating … until the shine of such overpowering love wears thin at some later stage.

I have known friends who had married and relocated overseas to live with their spouses, one down under to Australia, another to England, yet another to Japan. Sad to say one or two didn’t quite make it in their marriages as after a few years they’d pack their bags and return back home, or stay back and divorce or separate. A couple of the reasons I heard from the horse’s mouth were, “the weather and the food was really too much for me and the living style was not compatible at all” and “she was such an introvert and didn’t socialise and didn’t like or get along with any of my friends”.

There will always be valid reasons on both sides if two people find themselves at loggerheads on a regular basis and cannot continue living together under the same roof. It’s sad and tragic that in this modern day and era that it has become as easy to call it quits as it is to come together in the first place.

It is heartening and most praiseworthy to be able to say that a majority of mixed marriages that I know of have flourished and grown from strength to strength as the years go by. I must say that for many of these, religion does play an important role (accepted that for Roman Catholic Christians there can never be any possibility of any divorce), believers of all faiths in general do seem to find matrimonial union to be both a bond and a challenge to their love and unity. In most cases, the ready availability of elder counselling and prayer are extremely strong aids for those in need.

The most vital and important part of mixed marriage is that it promotes racial harmony among us all, as well as goes a long way to build the diversity that we all feel so strongly about – especially in such trying and challenging times when racists and extremists are running wild on the internet, screaming about superiority, and creating religious mayhem trying to divide our society at large. It doesn’t take a genius to know that such strong diatribes and insensitive utterances can be tamed by having a member in their family who’s from another race or religion.