Monday, February 6
You are at:Home»News»Nation»Malaysia will continue claim on South China Sea area — Saifuddin
For the freshest news, join The Borneo Post's Telegram Channel and The Borneo Post on Newswav. 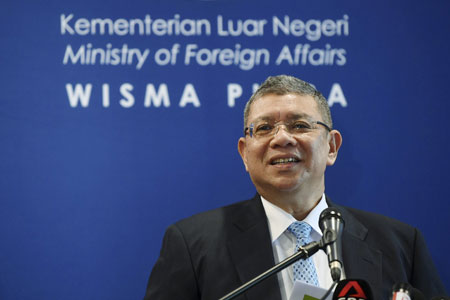 The minister said the ministry has expected Beijing’s move and described it as “normal”.

“For China to object is something that we expect, even before. This is normal. I’m not saying we are okay on it…but it is our claim and we will maintain our claim,” he told a press conference at Wisma Putra here yesterday.

When asked about the ministry’s next course of action, he said: “It depends, but the unusual end game is (for it to go to) arbitration”.

Saifuddin also said Malaysia is unafraid of retaliation from China.

“If we are to fear that, we will not submit our claim,” he said.

The minister, when listing Wisma Putra’s achievement in 2019, said that Malaysia has submitted to the UN Secretary-General on Dec 12, 2019, its claim to the remaining portions of its extended continental shelf at the northern area of Dangerous Ground in the South China Sea (Claim Area Limits of Continental Shelf Phase II).

According to the ministry, the submission is to enable the Commission on the Limits of the Continental Shelf (CLCS) to delineate the limits of Malaysia’s continental shelf beyond 200 nautical miles from its baselines.

Malaysia’s submission is in accordance with Article 76 of the United Nations Convention on the Law of the Sea (UNCLOS) 1982, whereby State Parties have the right to claim continental shelf beyond 200 nautical miles through the submission of relevant scientific and technical data to the CLCS.

The South China Morning Post reported last month that China has protested against Malaysia’s filing to the UN and has urged the UN Commission on the Limits of the Continental Shelf to not consider Malaysia’s submission.

In the report, Beijing also accused Malaysia of infringing on its sovereignty following Malaysia’s submission. —Bernama