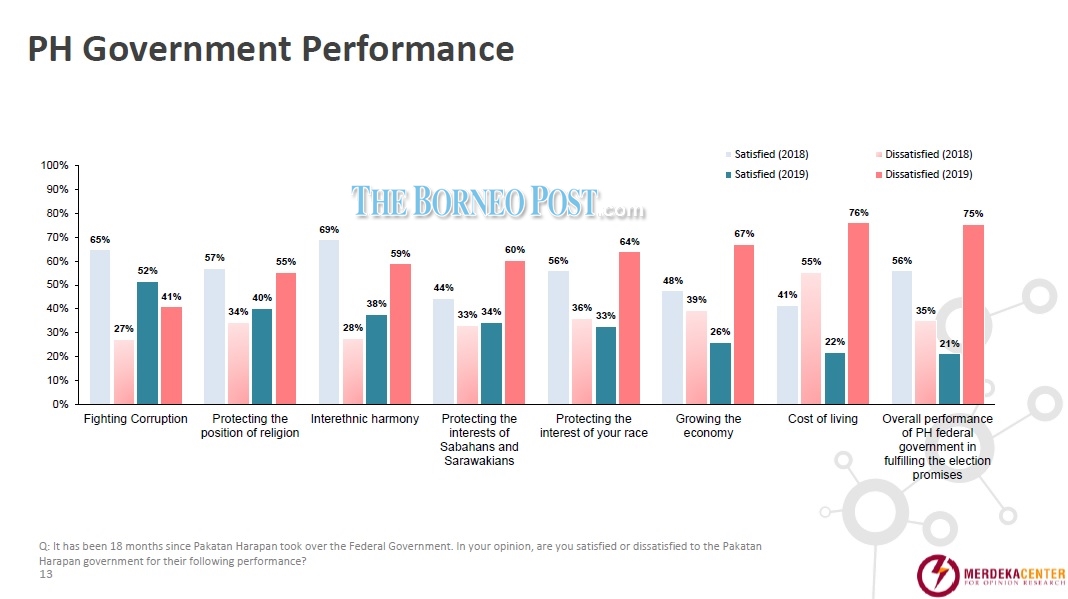 A chart by the pollster showing satisfaction and dissatisfaction towards the PH government.

KUCHING: Dissatisfaction over the federal government’s efforts in protecting the interests of Sarawak and Sabah has increased last year, a Merdeka Centre survey said.

In its latest ‘Malaysia Political Developments and Trajectories Update’, the pollster had found that the dissatisfaction had grown from 33 per cent in 2018 to 60 per cent last year.

The percentage satisfied with the government’s efforts had dropped from 44 per cent in 2018 to 34 per cent last year, the survey showed.

However, the Merdeka Centre did not elaborate on the reasons for the growing dissatisfaction.

There had in fact been some major strides made especially in restoring the rights of Sarawak and Sabah under the Malaysia Agreement 1963 (MA63) last year.

Last July, the Federal Cabinet agreed to the formation of the special cabinet committee on MA63 in line with Promise 40 in Pakatan Harapan’s election manifesto.

The committee was said to be studying and proposing corrective measures in relation to the status of MA63 in the context of current legislation; efforts to improve the people’s understanding of MA63 through the education system; implementation of the concept of federalism across the three territories of Peninsular Malaysia, Sabah and Sarawak, the rights of Sabah and Sarawak to natural resources as well as oil and gas; administrative matters that can be delegated to the states; the amount of allocation that is within the rights of Sabah and Sarawak; and amendment to Article 1(2) of the Federal Constitution.

The survey also identified the Sarawak state election in 2021 as one of the critical issues ahead for Pakatan Harapan (PH) government.

In May last year, 19 per cent were of the opinion that Dr Mahathir should step down as the prime minister as soon as possible, said the survey, adding that the percentage rose to 25 per cent in November, 2019.

The pollster also found in May last year that 32 per cent wanted Dr Mahathir to remain as the prime minister until the 15th general elections. Interestingly, this percentage hiked to 48 per cent in July and then dropped to 41 per cent in November the same year.

On who should lead the country in the future, the survey discovered in October 2018 that 47 per cent preferred Dr Mahathir while 28 per cent chose Anwar.

However, such percentage dropped to 42 per cent for Dr Mahathir but showed a four per cent increase (to 32 per cent) for Anwar in November last year.

The survey indicated a drastic drop of support from the Indian community for Dr Mahathir from 71 per cent in October 2018 to 14 per cent last November as well as from the Chinese community from 53 per cent to 20 per cent over the same period.

To the contrary, the support from the Indian and Chinese communities towards Anwar skyrocketted, with 62 per cent of Indians in favour of the PKR heavyweight last November, from 18 per cent in October 2018, and 58 per cent of Chinese preferred Anwar from 26 per cent over the same period.

The Merdeka Centre asserted that the country’s present politics “is guided by two factors” namely the prime minister’s transition of power and prepearing for the 15th general elections or stability of the PH government.

It said there will be increased uncertainties over nature, timing and outcome of the transfer of premiership from Dr Mahathir to Anwar while adding that there is a need for the ruling government to address the growing socio-economic angst.