Tuesday, February 7
You are at:Home»Business»Bullish outlook for palm oil sector in 2020
For the freshest news, join The Borneo Post's Telegram Channel and The Borneo Post on Newswav. 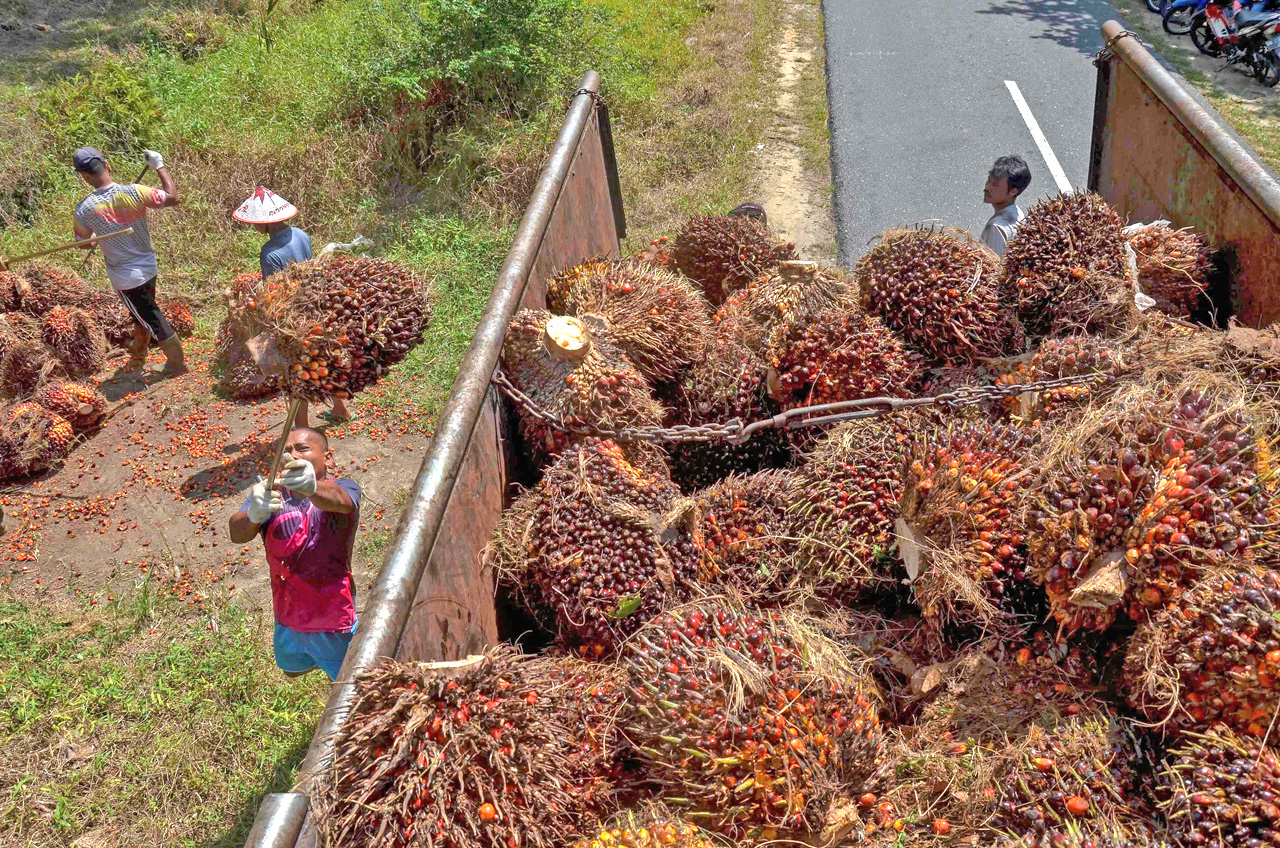 The Malaysian palm oil industry is bullish on this year’s outlook for the sector amidst flattish production, depleting global vegetable oil inventories and growing demand for the commodity. — AFP photo

KUALA LUMPUR: The Malaysian palm oil industry is bullish on this year’s outlook for the sector amidst flattish production, depleting global vegetable oil inventories and growing demand for the commodity.

The country’s palm oil production is projected at 19.3 to 19.5 million tonnes this year, lower than last year’s forecast of 20 million tonnes, which augurs well for the price to climb higher.

“The golden crop is expected to have a stellar performance throughout the year,” he said in his Palm Oil Supply and Demand Outlook 2020.

Research houses echoed Yusof’s optimism and noted that the worst is over for the plantation industry while sharing the crude palm oil’s (CPO) price assumption of between RM2,600 per tonne and RM2,700 per tonne for this year.

At this price, the commodity could still be well supported with demands from key markets like China and India.

Analysts are also hopeful that a higher CPO price would lift the equity market since many of the country’s big plantations companies are listed on Bursa Malaysia.

“They have the potential to lift the index higher but we must be wary of the higher ringgit that could make the palm oil expensive, reducing export prospects,” Singapore- based Palm Oil Analytics owner and co-founder Dr Sathia Varqa told Bernama.

Yusof said with China’s soybean crushing activity and imports of rapeseed and rapeseed oil expected to fall, palm oil stands a big chance to capitalise on the market.

“China has turned out to be the best importer for palm oil in 2019 and will continue to be so in 2020 due to edible and industrial demand and together with sunflower oil, it (palm oil) will replace soybean oil in China,” he said.

A drawn-out trade war between Beijing and Washington would also benefit palm oil exports to China.

“Although US-China has an agreement in principle on Phase One of their trade deal, the devil is in the details. No surprise if the deal fizzles out. As of now any deal will be supportive for the US soy complex and this will spill over to support higher palm prices,” Sathia said.

So far, demand from India has been strong despite some glitch late last year when Indian importers planned to stop buying palm oil from Malaysia and shifted their attention to Indonesia, another major producer of the commodity.

The industry also welcomed the recent decision by New Delhi to slash import taxes on crude and refined palm oil from Southeast Asian (ASEAN) countries following a request from suppliers which could potentially lead to India increasing its palm oil imports in the coming months.

“The reduction in import taxes will see increased buying momentum from India this year at the back of escalating prices. But the difference between a palm and soft oils will still be a deciding factor in buying palm or other oils,” Sathia said.

The latest tax adjustment according to him, would see the difference between CPO and Refined Bleached Deodorised (RBD) palm olein decreased to 7.50 per cent from the previous 10 per cent and this will depress the Indian refiners’ margin.

He expects India, which is 70 per cent import-dependent on edible oil to feed it’s over a billion population, will import 10.20 million tonnes of palm oil in 2019 to 2020 from 9.41 million tonnes previously.

Meanwhile, the demands for CPO for biodiesel will also see a definite upswing as Indonesia, Malaysia, and Thailand increase their national blends of diesel and fatty acid methyl esters (FAME) to make the clean and renewable fuel.

For instance, Indonesia will increase its mandatory biodiesel policy from B20 to B30 in January 2020.

“The policy is expected to see an additional 3.3 million tonnes of CPO being absorbed domestically to produce 9.6 million kilolitres of FAME by 2020,” said Yusof.

Similarly, Malaysia is also planning to increase its biodiesel blend from B10 to B20 for the transportation sector and B7 to B10 for the industrial sector in 2020. The move is expected to absorb more than 1.3 million tonnes of CPO domestically.

“In other words, if the CPO supply is limited due to lack of fertiliser application and extreme weather, the biodiesel implementation will further limit the palm oil supply from both Indonesia and Malaysia; therefore the outlook for palm oil (price in) 2020 will be positive, ” according to the CPOPC executive director.

Efforts by the industry to become more sustainable will be more crucial in 2020 especially if companies or countries in the European Union (EU) begin restricting the use of palm oil.

Yusof said there are fears that the EU, which wants to phase out palm oil use in biofuel, may look to the food sector next.

He advised the palm oil-producing countries that the EU’s proposed limits on 3-MCPD esters may impact the usage of palm oil in food products and is set to be enforced legislatively to meet acceptable safety levels of the food processing contaminant.

“CPOPC has agreed that one maximum level of 3-MCPD at 2,500 ug/kg for all vegetable oils should be adopted, as the acceptable safety limit for consumption,” he said.

CPOPC’s Forum on 3-MCPD and GE’ in Jakarta, Indonesia on Feb 7, 2020, is aimed to focus on the topic to prepare the industry to meet this level.

Meanwhile back home, the national sustainable certification scheme or the Malaysian Sustainable Palm Oil would be made mandatory for growers effective January. Under this certification, growers of the crop are expected to meet certain standards on protecting the environment and workers’ rights.

Noting the significance of palm oil industry for the country economic well being, the Prime Minister Tun Dr Mahathir Mohamad in his new year message shared his view about the important industry and how the positive price of the commodity had benefited the people.

He also advised them to be prepared for “rainy days”.

“The price of palm oil has reached the highest level for a long time and the government is happy and grateful that the people are benefiting from this increase.

“But at the same time, the government should remind the people who enjoy the benefits to save for the coming days should the price of palm oil is not that high,” he said.

The government through its agencies would continue to introduce policies to ensure the people could maximise profits from the industry while engaging in other industries, added the Prime Minister, who has been a strong supporter for the industry. — Bernama