Wednesday, July 8
You are at:Home»News»Crime»Customs seizes contraband cigarettes, alcoholic beverages worth over RM13,000 in Bintulu 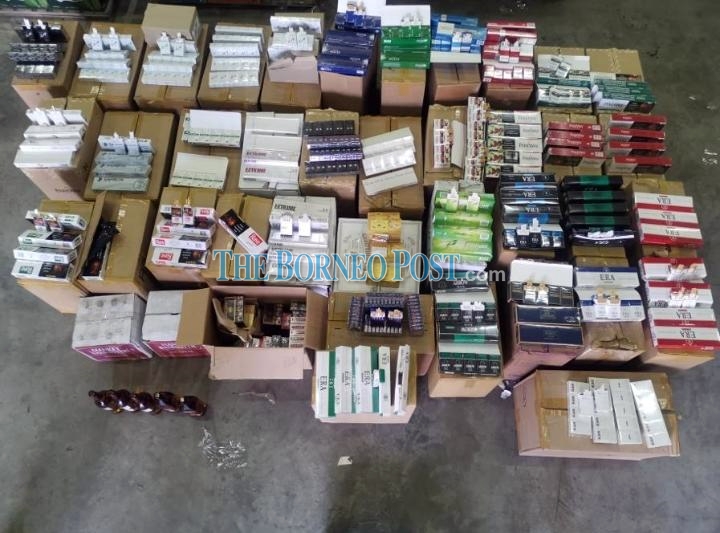 Among the contraband items confiscated by JKDM Bintulu

BINTULU: The Royal Malaysian Customs Department (JKDM) has seized a total of 194,360 sticks of contraband cigarettes and 29 litres of alcoholic beverages valued at RM13,985 with unpaid duties worth about RM132,218.75 from a premises in Bintulu yesterday.

Sarawak Customs director Datuk Sharifah Halimah Tuanku Taha in a statement today, said the operation was conducted around 10am on a premises at Jalan Sibiyu by the Bintulu Customs enforcement team.

“From the inspection, the raiding team has found some white and ‘kretek cigarettes’ of various brands and alcoholic beverages believed yet to be approved by Customs on the upper floor of the premises,” she said.

According to her, a 43-year-old man was also detained to assist in investigation.

The case would be investigated under Section 135 of the Customs Act 1967, which carries a fine 10 times the value of the goods , or RM100,000, or jailed not less than six months and not exceeding five years or both, upon conviction.

She also urged the public to channel information involving cigarettes, alcoholic beverages, fireworks or drugs smuggling activities, by calling JKDM at its toll-free-line 1-800-88-8855 or via http://aduan.customs.gov.my.