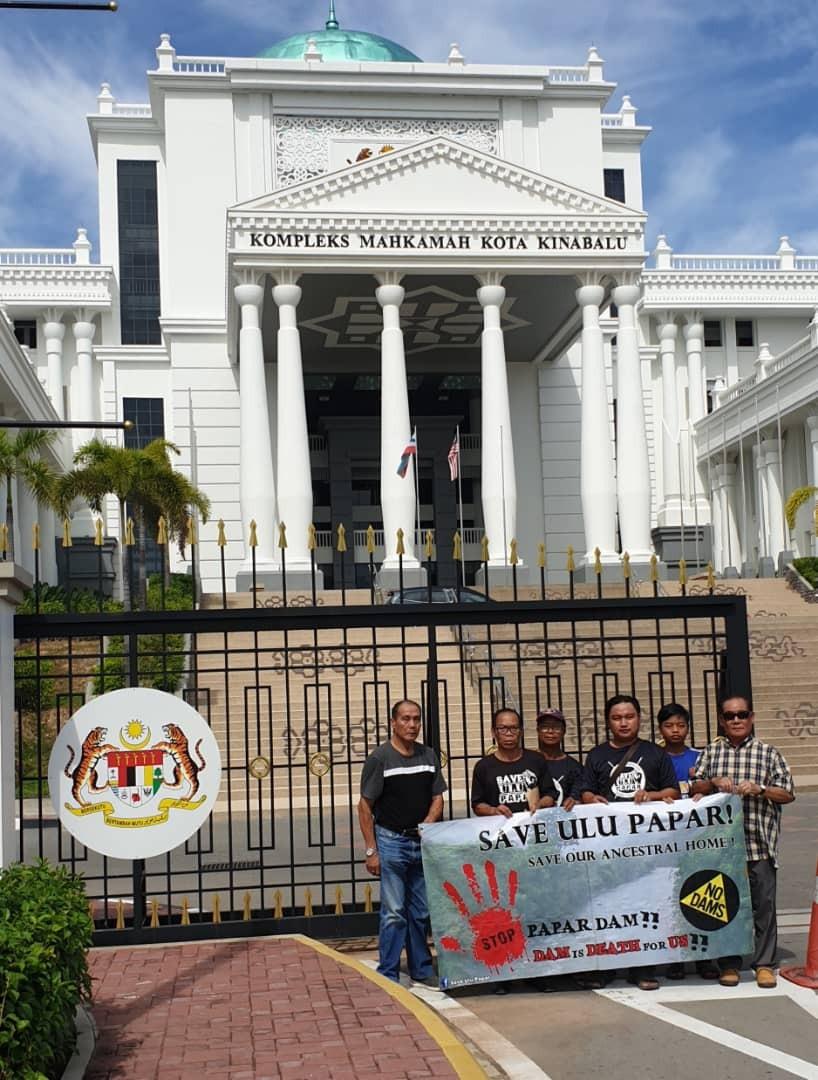 The plaintiffs at the entrance to Kota Kinabalu Court Complex.

KOTA KINABALU: Three farmers from Kampung Kalanggaan, Kampung Buayan and Kamlung Kionop in Penampang district have started legal action to challenge the validity of the letter of intent of the Papar Dam to two companies on the grounds that the document dated October 10 last year is illegal.

This is because at the time of the issuing the letter of intent, the position of the Water Department director had already been declared illegal by the Kota Kinabalu High Court.

The KK High Court had on 9 October 2019 declared that the appointment of the director, Datuk Amarjit Singh, was in contravention of the Sabah Water Enactment 2003. The court declaration was made following a separate court action last year by ex-Chief Minister Datuk Yong Teck Lee and Tawau businessman, Pang Thou Chung who sought the court’s ruling on whether the appointment of Amarjit on 1 August 2018 had contravened Section 3 of the Water Supply Enactment in that Section 3 of the Enactment stipulates that the director of the Water Department shall be appointed from among members of the Sabah public service.

Amarjit was not and, never was a member of the Sabah public service.

The three villagers, Dasius Kawang, 25, of Kampung Kalanggaan, Mositol Sondigon, 66, of Kampung Buayan and Kurunbong, 59, of Kampung Kionop yesterday gave instructions to their lawyers to file a judicial review of the action of the illegally appointed director of the Water Department in the selection of the two companies.

Dasius, Mositol and Kurunbong said to add insult to injury, the ruling government of today had reneged on its election promise to review or to cancel the Kaiduan dam project (now renamed Papar dam) in Penampang.

They said senior leaders like Datuk Darrel Leiking and other leaders who are now ministers and assistant ministers, had visited their villages several times and made repeated promises that if they won the last elections, then the Kaiduan dam project would be cancelled. Instead of reviewing the project, the new ministers have refused to even meet the villagers to explain or to justify why the project must go ahead.

“We are left completely in the dark, we are worried about our future. We have families, houses and farms.

Does this government expect us to be refugees in our own ancestral homeland? This is cruel.

“We have no choice but to get the help of lawyers because none of the elected ruling party leaders want to meet us.”

The three plaintiffs said the High Court had declared that the current director of the Water Department is illegal.

“He should not be in office anymore but he has not only defied the law by refusing to leave office but he has bulldozed the project by issuing the letter of appointment to the two contractors one day after the court had ruled that the director’s position was illegal.

“We find it odd that the local company appointed was only incorporated on 5 September 2018, which was only three weeks after the effective appointment of the director on 10 August 2018. It is a completely new company. The other company bears a Kuala Lumpur address.

“We appeal to the people to support our case to throw out the letter of appointment of the contractors and to give us hope. We once again appeal to the government to listen to us, who had supported them to win. We have been abandoned by the ruling ministers and YBs. Please help us.”