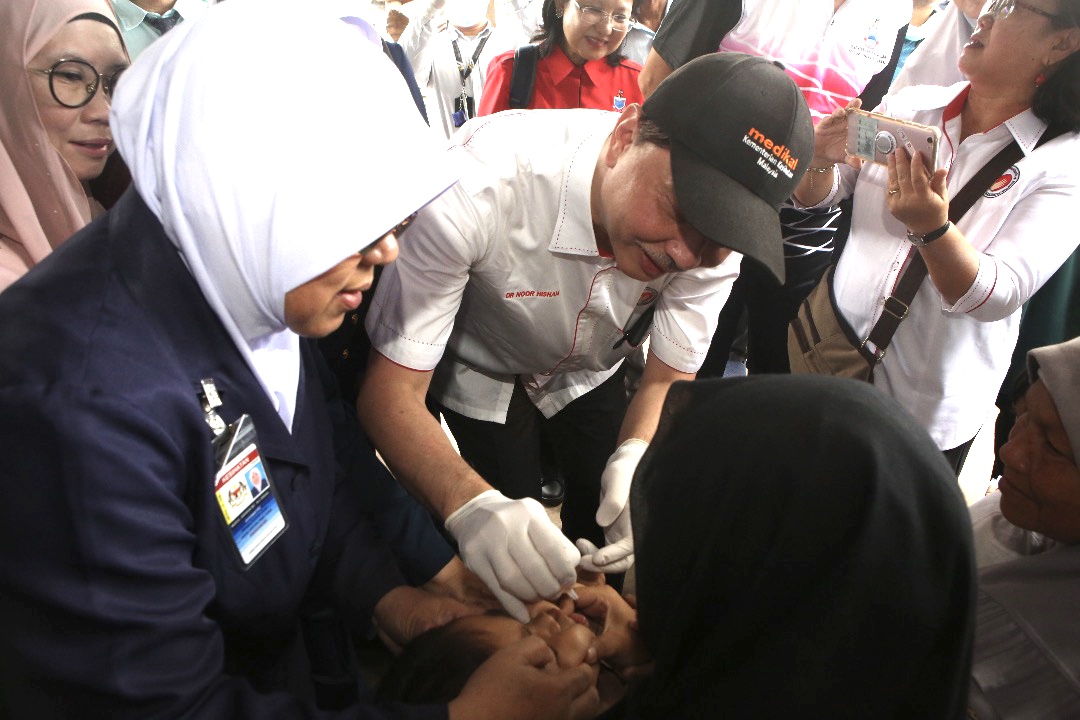 Noor Hisham (centre) administering an oral polio vaccine to one of the children after the launch of Sabah Polio Immunization Campaign at Pulau Gaya yesterday.

KOTA KINABALU: Two more children have been confirmed infected with polio virus in Sabah after a three-month baby boy was recorded having the disease in Tuaran in December last year.

“The eight-year-old boy who is from Sandakan was found not vaccinated against polio. On December 9, 2019, he had fever and three days later, he could not walk.

“Another boy in Kinabatangan who was also not vaccinated, had fever on November 17, 2019 and was treated at a clinic. On December 1, he was admitted to the hospital after complaining of back pain and was unable to walk. The patient is now able to walk with a walking stick,” he said in a statement here yesterday.

He said all patients are still being treated at the hospital and are in stable condition.

He said detailed investigations conducted to identify the source of infection in the two new cases found they were having acute flaccid paralysis (AFP).

To date, 705 residents from the villages of the two boys had been screened and there were no AFP cases recorded.

The Health Ministry is calling on Sabahans especially parents to pay attention to their children’s vaccination requirements by getting two dosages of oral polio vaccine during an ongoing campaign.

He also reminded the people to obtain early treatment at the clinic and hospital if there were symptoms of polio and take the preventive measures as advised by the Health Ministry.

He said the investigation is done to ascertain the cause of death as H1N1, a virus already present in the community, is an infection that comes with complications.

“It’s already in the community. It’s just like any other viral itself. But more important is how do we handle in terms of hand hygiene and environment?” he told reporters when approached after the Sabah Polio Immunization Campaign (KIPS) launch in Pulau Gaya here yesterday.

Chung Hwa Kindergarten Nursery Likas headmistress Chu Ye Ni in a statement yesterday addressed the viral message regarding a three-year old child from the kindergarten who had passed away due to H1N1 infection.

She said the child had not turned up at the kindergarten since registering in 2019.

Earlier during the ceremony, Noor Hisham stressed that it was vital for parents to immunize their children.
“For parents out there with children under five, please make sure your children have complete immunization and immediately take their children to a nearby health care if their child has polio symptoms,” he said.

“There is no cure for paralysis, however, we can prevent it by ensuring that children under the age of five receive polio immunization. Immunization is your child’s rights, do not ignore their rights and health,” he emphasized.

The director general also proposed for MOH or the Sabah State Health Department to come up with the best sewage system for residents living in water villages such as Pulau Gaya.

Two polio immunization posts were opened at Kampung Kesuapan and Lok Urai here yesterday as part of an initiative for Malaysia to regain its polio-free status from the World Health Organization (WHO).