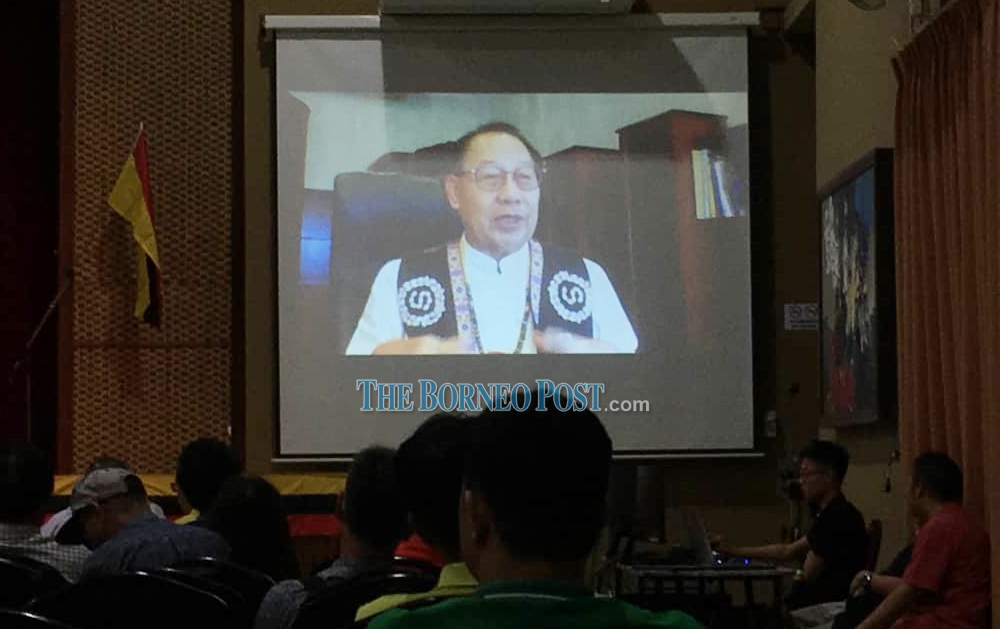 Jeffrey speaks to the crowd via a live teleconferencing feed.

The Keningau MP gave a 20-minute talk on ‘Sabah, Sarawak: A Shared Destiny during the Independence: The Final Destination’ forum organised by the Movement for Change Sarawak (MoCS) at DBNA Hall.

Jeffrey, who is also Tambunan assemblyman and Sabah opposition leader, spoke about the current situation affecting Sabah and Sarawak within Federation of Malaysia and how he felt both states were being treated and exploited like “colonies”.

He pointed out the situation should not be like this because even the current Prime Minister Tun Dr Mahathir Mohamad had acknowledged these two Borneo states as equal partners which formed Malaysia in 1963.

“We need to settle the relationship between Sabah, Sarawak and Malaya (Peninsular). We come in together, our aspiration is independence and it is up to us.

“We have journeyed together, we have suffered together and at the same time we have learnt together and there are things we enjoy together. At the end of the day, if we have to decide to exit or separate (from Malaysia), I think we should do it together when we are ready,” he said.

Apart from the MoCS forum, Jeffrey was also scheduled to chair the Dayak International Conference also in Kuching yesterday afternoon.

It was the second time that Jeffrey was denied entry into Sarawak, after the first one in 2017. It was reported yesterday that he had applied for a special entry just to attend these activities but received a negative reply instead.

Jeffrey in his speech today said it was unfortunate he could not make it to Kuching for the forum. Meanwhile, Siah and Voon also expressed their disappointment with the Sarawak government for not allowing Jeffery to enter Sarawak.

Voon said Jeffrey should not be barred as he was not a security threat, and he questioned whether the decision was due to political reasons by the Gabungan Parti Sarawak (GPS)-held state government.

Meanwhile, See said he and other comrades in Pakatan Harapan in Sarawak were supportive of the struggle for better rights for Sarawak. He also told the audience that he had once wanted to table a motion on referendum at the State Legislative Assembly but it was rejected.

See, who is also legal advisor of MoCS, said the movement for referendum, devolution and independence in Sarawak is similar to that of Scotland.

“It does not matter what party you come from. At the end of the day, what is best for Sarawak is what we should do,” he said.

Previous ArticleState parties have ‘learnt a lesson’ after being in BN, says Abang Johari
Next Article OKU woman allegedly beaten by own brother over money