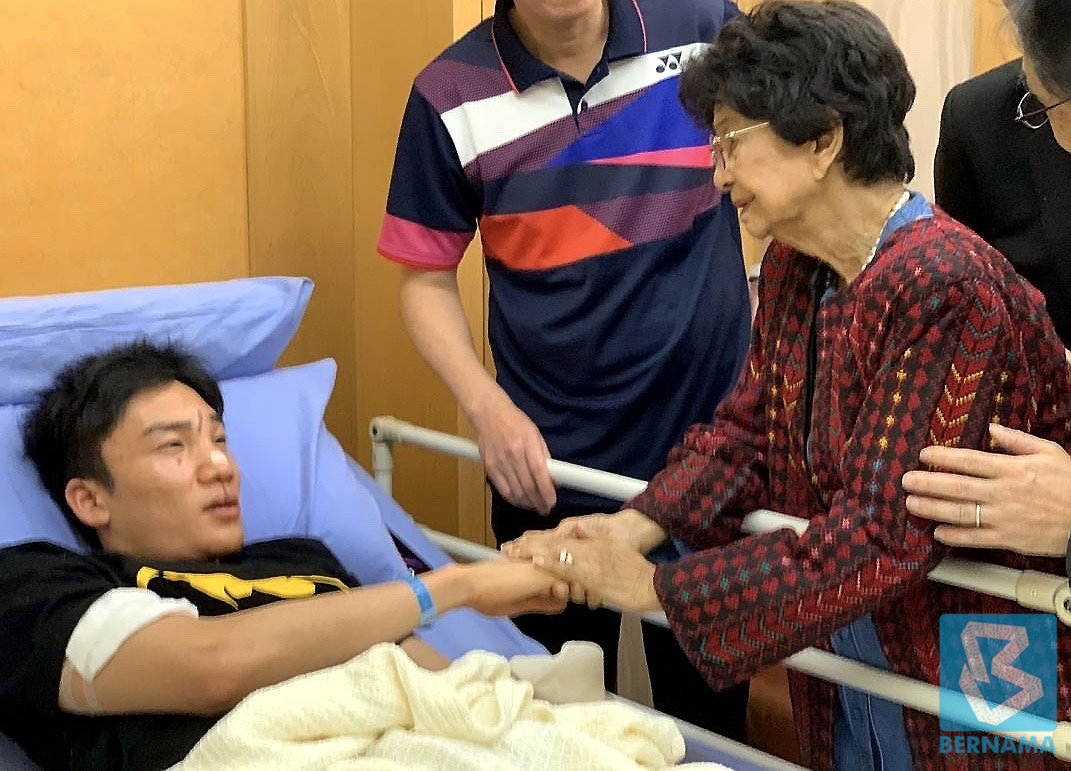 Prime Minister’s wife Tun Dr Siti Hasmah Mohd Ali visiting world number one men’s singles shuttler Kento Momota who suffered a broken nose today in a road crash that claimed the life of the driver of the van that was heading to the KL international Airport. – Bernama photo

KUALA LUMPUR: World number one men’s singles shuttler Kento Momota suffered a broken nose today in a road crash that claimed the life of the driver of the van that was heading to the KL international Airport.

He also sustained cuts on his lips that required stitches and also some other facial injuries.

In the 4.40 am incident, the van driven by B. Nageswarau, 24, and carrying three other passengers, crashed into a slow-moving lorry at KM 13.7 of the Maju Expressway (MEX).

Selangor Fire and Rescue Department director Norazam Khamis said Nageswarau, who was pinned in his seat, died at the scene.

Besides Momota, 25, the current world champion, the other passengers were assistant coach Yu Hirayama, 35, physiotherapist Morimoto Akifumi, 42, and William Thomas, 30, a technical officer of the Badminton World Federation.

“The victim’s body and all the injured were sent to the Putrajaya Hospital,” he told Bernama.

Norazam said a team of 10 rescuers from the Serdang Fire and Rescue Station was rushed to the scene on being alerted at 4.57 am.

Yesterday, Momota, who is on a league of his own, won the Malaysia Masters men’s singles title at the Axiata Arena here, his first at the prestigious tournament after chasing it for many years.

He defeated former world champion Viktor Axelsen of Denmark in the final.

Thomas suffered leg injuries and also had to be given seven stitches on his head, he said.

Youth and Sports Minister Syed Saddiq Syed Abdul Rahman rushed over to the hospital to visit the injured victims.

“So far all the four are recovering well,” he said, adding that Momota “as always, is in his fighting spirit”.

“We are monitoring very closely. We will ensure all four will get the best treatment. We are relieved to hear that they are in stable condition,” he said. – Bernama