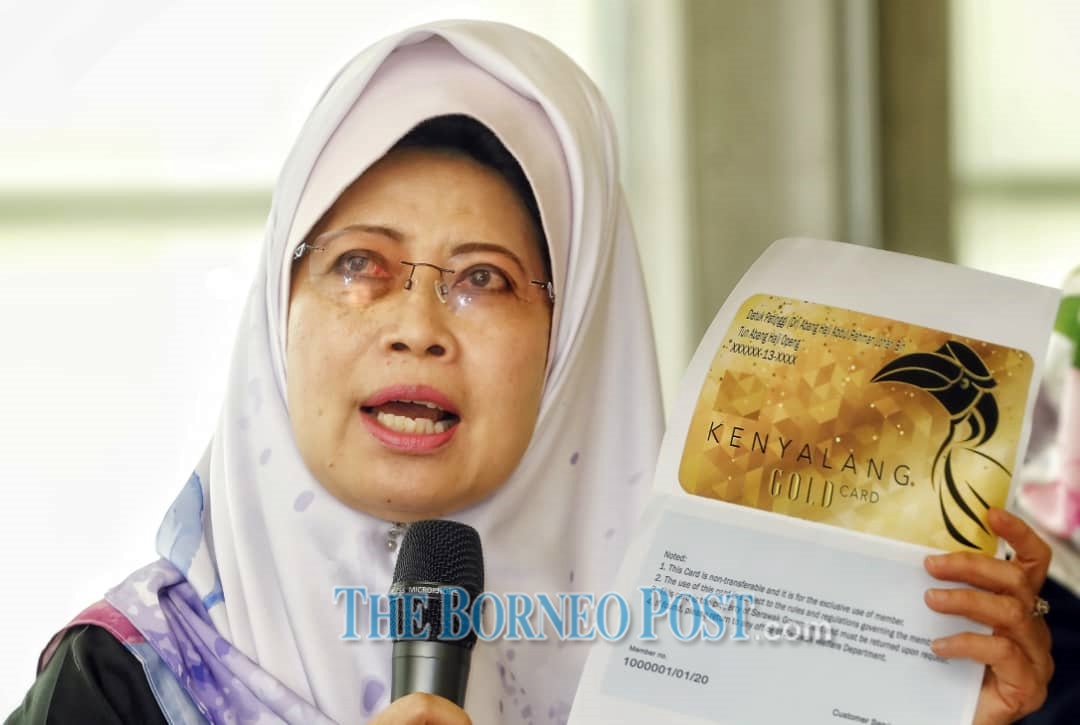 Fatimah showing the finalised design of the Kenyalang Gold Card to reporters during the press conference today. – Photo by Chimon Upon

Fatimah said the launching ceremony of the Kenyalang Gold Card will be held at Borneo Convention Centre Kuching (BCCK) and is expected to be officiated by Chief Minister Datuk Patinggi Abang Johari Tun Openg.

“Although the launching ceremony will only be held in March, we do encourage those who are eligible to apply for it now. There are companies who have signed up as vendors for the card, which is meant for Sarawakians aged 60 and above,” she added during a press conference held at the State Library today.

This card is formulated using a similar concept which has already been implemented in Singapore and New Zealand and the tagline for the card is ‘Life Starts At 60’.

“This is important for senior citizens, because as they age they would have problems with their sight, hearing and dental, and these discounts will come in handy. Efforts are ongoing to get more vendors, especially in health services,” said Fatimah.

Forms can be obtained at any Social Welfare Department office, Resident’s office or District’s office.

The card’s design, pictured in shimmering gold and embossed with the image of a hornbill, was chosen to reflect the Malay words “warga emas”, which means senior citizens.

Fatimah said the state government has allocated RM24.4 million for the initiative next year and there will be a launching ceremony for the Kenyalang Gold Card as the the Kenyalang Gold Card is aimed at enhancing the well-being and the welfare of the elderly in Sarawak, through the provision of certain privileges and benefits from organisations and commercial sectors.

One of the benefits of the Kenyalang Gold Card is the ‘Death Compassionate Assistance’, which would provide an amount of RM3,000 to cover the funeral expenses of the card holder once he or she passes away.

However, the benefit is only intended for those without next-of-kin, or those from poor family backgrounds and the monetary assistance will have to be applied and be evaluated on a case by case basis.