Saturday, January 25
You are at:Home»News»Police: Overtaking on dangerous stretch believed to be cause of collision between SUV and lorry 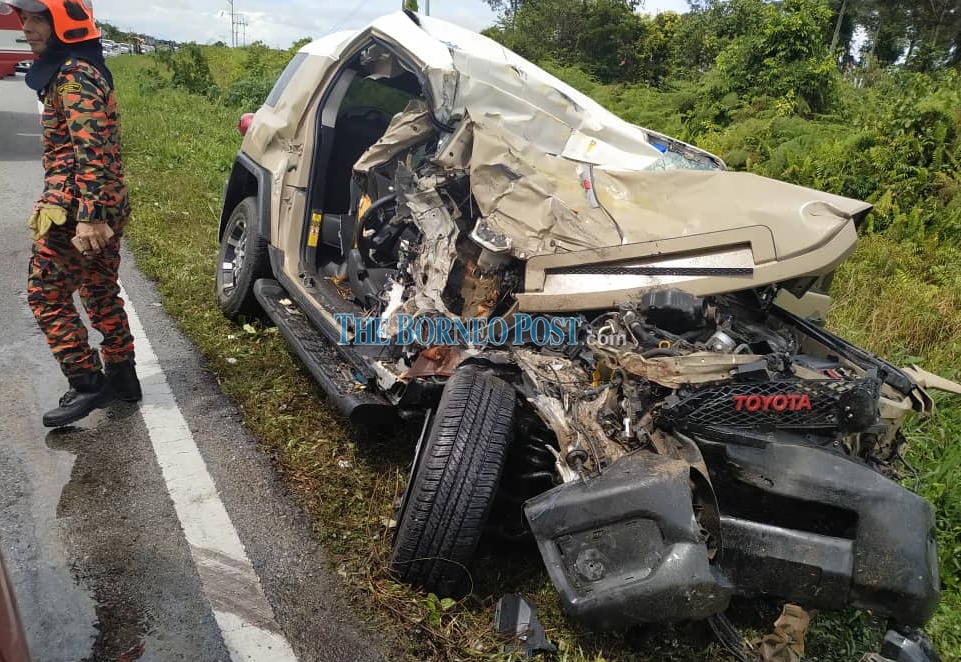 The mangled wreckage of the vehicle after all its passengers were extricated from it.

KUCHING: A Toyota FJ Cruiser sports utility vehicle involved in a head-on collision with a lorry along Jalan Sebangan in Sebuyau here this morning had apparently attempted an overtaking maneuver that ultimately resulted in the crash.

It was believed that the driver of the FJ Cruiser had attempted to overtake two other vehicles in front of it, but was unable to return to its own lane in time, thus crashing into the oncoming lorry in the opposite lane.

The accident happened at around 11.48am this morning.

State Traffic Investigation and Enforcement chief Supt Alexson Naga Chabu in a press statement said that preliminary investigations revealed that the incident happened on a stretch of road that was marked by double lines near a sharp corner heading towards Sebuyau.

The sports utility vehicle was carrying three other passengers and was driven by one of the victims, Izzat Al Haqeem Khairul Azizi, 23, from Kuching, heading to Kabong, Saratok.

The accident saw the vehicle crashing into the lorry, driven by a 44-year-old Boon Kee Nam.

Due to the impact of the accident, one passenger, seated in the back seat, Poziah Udin, 64 died at the scene of the crash, while the other three suffered serious injuries.

Izzat Al Haqeem, who suffered a broken left hand and sprained toe, Khartinah Firdaus, 68, who had fractured both legs and a broken right hand, and the wife of Kalaka state assemblyman, Datuk Abdul Wahab Aziz’s, Datin Fatimah Zainuddin, 70 who cracked her right leg have been referred to the Sarawak General Hospital (SGH) and Sarawak Heart Centre in Kota Samarahan, respectively.

The case has been classified under Section 41 of the Road Transport Act (RTA) 1987.