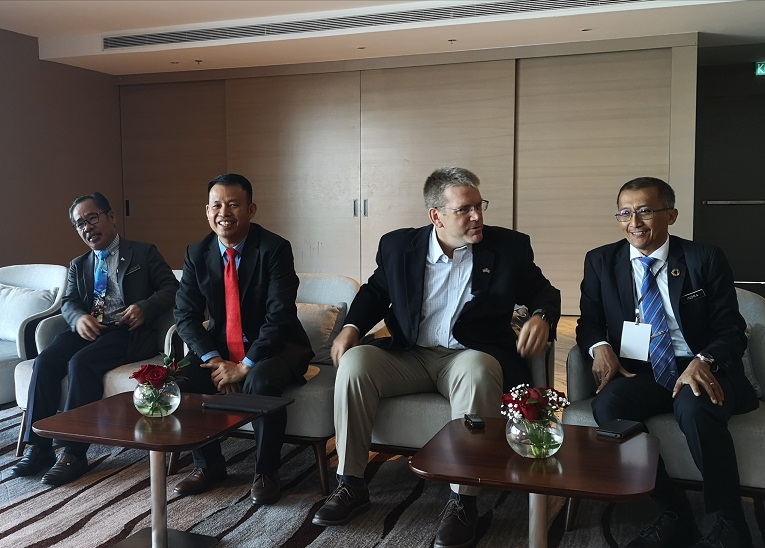 From left to right: Augustine, Jamili, Dean and Indra at the press conference yesterday.

Both the intelligence unit and the laboratory will support and collaborate with other agencies both locally and internationally, said Sabah Wildlife Department director, Augustine Tuuga.

The funding for the set-up will come from the US government under the Bureau of International Narcotics and Law Enforcement Affairs whereby RM4 million has been set aside.

In addition to funding the unit and the development of the laboratory in Potuki near here, the amount will also be used for training programmes, trainers, equipment and vehicles for the enforcement for a duration of two years.

The SWD has assigned 11 of its staff to be part of the unit. The training programme will include members from other enforcement agencies.

“The intelligence unit members will attend a number of specialized training sessions on crime analysis and investigation,” he said during the workshop on Illegal Wildlife Trade and Counteracting Measures in Sabah.
The event was jointly organized by the SWD in partnership with the Danau Girang Field Centre (DGFC).

Tourism, Culture and Environment Minister Datuk Christina Liew who was represented by the ministry’s permanent secretary, Dr Jamili Nais in her speech reminded that wildlife crime was not just a local problem but often part of an international wildlife trade syndicate associated with drugs and human trafficking as well as money laundering.

Meanwhile, US Embassy in Malaysia’s Deputy Chief of Mission, Dean Thompson described Sabah as one of the world’s most biodiverse regions hosting an array of species on both land and in the sea.

“Tourists from across the world come to Sabah’s jungles to see orangutans, sun bears, proboscis monkeys and Borneo elephants, just to name a few. They come to swim amongst the sea turtles and around spectacular coral reefs. The New York Times recently selected Sabah as one of its “52 Places to Visit in 2020,” highlighting the draw of this state’s wealth of biodiversity,” he said.

He then stressed the need to protect Sabah’s wildlife against traffickers, stating that it wasn’t just a moral responsibility but would help preserve the economic livelihood of its people.

And the recent passing of Iman, Malaysia’s last rhino, illustrated the urgency of this issue, he said.

He also said that wildlife trafficking had been viewed as a crime of interest primarily to environmentalists for decades.

“Over the past decade, stakeholders in both the public and private sectors have come to recognize that wildlife trafficking impacts the safety and security of the people who live in and along the trafficking routes.

It is a source of illicit financial flows and has devastating impacts on ecosystems and livelihoods. The United States has made a concerted effort to offer networking, support, and training to build capacity at the local, national and international levels to tackle this global plague,” he said.

He also mentioned that in 2016, the US Congress passed the End Wildlife Trafficking Act.

He explained that the Act instructed Federal agencies to develop a whole of government approach to counter wildlife trafficking, both domestically and globally.

“As part of this effort, the State Department’s Bureau of International Narcotics and Law Enforcement is contributing funding to programs like this to confront and combat wildlife trafficking. This workshop marks the beginning of a two-year, four-million ringgit program in partnership with the Danau Girang Field Center and Sabah Wildlife Department designed to boost Sabah’s wildlife enforcement capacity and expertise in wildlife forensic investigations, and encourage interagency coordination amongst the law enforcement and the NGO communities,” he said.

He also said that the US embassy had provided support through numerous other programs to protect and preserve Sabah’s natural wealth.

“Last November, Universiti Malaysia Sabah hosted a Zoohackathon which brought together coders from across Borneo to develop innovative solutions to wildlife trafficking challenges. In December the US Fish and Wildlife Service hosted a week-long Crimes Scene Investigation workshop focused on skills development relevant to wildlife crimes. Just this month, our partners at the Kudat Turtle Conservancy wrapped up a year-long program to train eco divers to monitor and protect Sabah’s reefs.”

Previous ArticleTime to campaign, not protest – Shafie
Next Article Dr Chin: 259 people issued with compounds for smoking at eateries in Sarawak