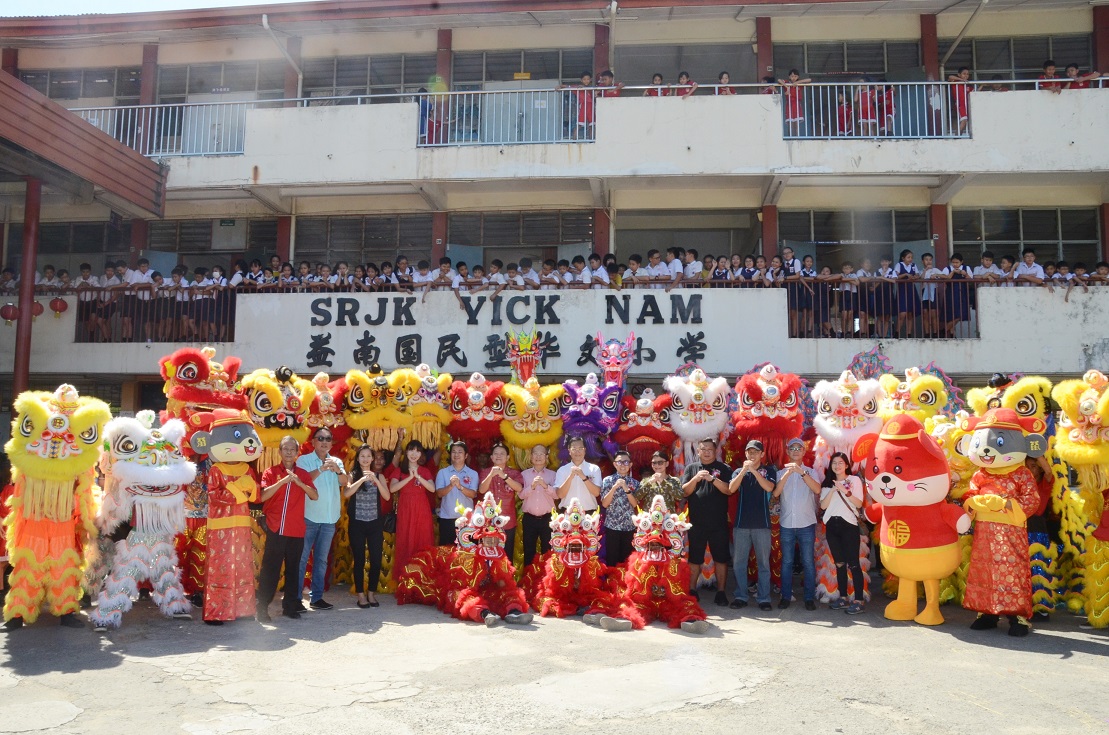 Lee (left) and the sponsors of the dragons, unicorns and lion heads after the eye-dotting ceremony.

KOTA KINABALU: In Sabah, the dragon, unicorn and lion dance culture is not merely confined to the Chinese community, but embraced by people from all ethnic groups.

He said members of the troupe came from various ethnicities, including Kadazans and ‘Malays’, some of whom have been with the troupe for decades.

“The Chinese only make up five per cent of our members.”

He said the low participation of Chinese was because they saw the lion dance as a physically demanding and strenuous activity.

Nevertheless, Lee said the dragon, unicorn and lion dance had captivated the bumiputeras.

“They feel proud dancing with the lion heads,” he said when met at an eye-dotting ceremony for two dragons, three unicorns and 19 lion heads at SJK(C) Yick Nam, Inanam here yesterday.

Lee introduced two of his members to the media, Augustine Beda and Kelvin Yap, who practically grew up with the lion dance troupe over the past 30 years.

Augustine, a Kadazan, joined the SJK(C) Yick Nam Dragon, Unicorn and Lion Dance Troupe at the age of nine when he was a pupil of the school.

Fast forward 30 years, the 39-year-old man is now a trainer of the troupe, coaching the dragon and lion dance teams.

“Dragon and lion dance have always been my hobby and interest.

“I will continue to be a part of this troupe for as long as I possibly can.”

Meanwhile, Kelvin was a member of a troupe since the age of 11, while he was still studying at SJK(C) Yick Nam.

The 41-year-old Sino-Kadazan said he started off with being the back dancer, front dancer and drummer for the lion dance troupe.

Now he is the trainer and team leader for the troupe.

Kelvin, who works in retail, said he always applied for leave during the Chinese New Year so that he could lead his team in the lion dance performances during the festivities.

SJK(C) Yick Nam Board of Governors chairman Victor Cham said the dragon, unicorn and lion dance was an integral part of the Chinese New Year.

“Yick Nam’s lion dance troupe is not only an effort to preserve the Chinese culture and spread the festive joy, but more importantly, to raise funds for our school’s development fund.”

Cham said the school planned to build a four-storey classroom and administration building this year and the school was still short of funds.

“We hope members of the public and the business community will give the lion dance troupe from our school big support during this Chinese New Year.

“Proceeds from the lion dance troupe will be channeled to the school’s development fund.”

He also thanked the sponsors of dragons, unicorns and lion heads for their continuous support.