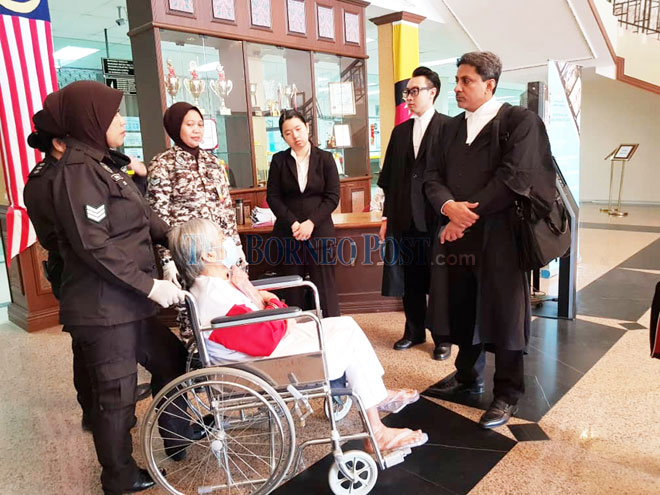 Shankar (right) and Lim (second right) seen with Naphaporn (on wheelchair) and others at the courthouse.

KUCHING: A Thai woman was spared the gallows yesterday when the Federal Court here set aside the death sentence imposed on her by the High Court, and reduced her charge of trafficking 1.9284kg of methamphetamine to drug possession.

A five-member panel of judges led by Tan Sri Tengku Maimun Tuan Mat instead sentenced Naphaporn Tangjit, 60, to eight years in prison under Section 12(2) of the Dangerous Drugs Act 1952, read with Section 39A(2) of the same Act.

The apex court decided that it was wrong for the lower courts – the High Court and Court of Appeal – to apply the double presumption principle to secure a conviction and death penalty in any serious case, in this instance drug trafficking.

The prosecution had earlier agreed to the original charge being reduced.

Naphaporn, who is HIV-positive and in deteriorating health, was apprehended by Customs officers upon arriving at Kuching International Airport on Nov 1, 2015 from Hong Kong via Kuala Lumpur.

She was initially acquitted from the drug trafficking charge by the High Court here on Dec 29, 2016.

The prosecutor however filed an appeal for the case to be tried again at the High Court, where Naphaporn this time was found guilty of the charge and sentenced to death.

Her subsequent appeal to the Court of Appeal was dismissed in June 2018.

DPP Nahra Dollah appeared for the prosecution yesterday while Naphaporn was represented by counsels Shankar Ram and Russell Lim.