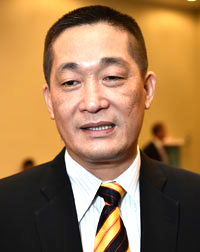 KUCHING: The Works Ministry demands Bintulu MP Tiong King Sing Tiong furnish evidence to support his accusation that Pan Borneo Highway Sarawak’s Work Package Contractors (WPCs) were paid despite them failing to carry out their work or retracts his statement with an apology.

See Chee How the Special Officer to the Works Minister in a statement yesterday expressed extreme disappointment with the malicious accusation by Tiong King Sing as it impugned the reputation of the WPCs.

“The Pan Borneo Highway Sarawak is still under the purview of Lebuhraya Borneo Utara (LBU), not the Works Ministry or its minister Baru Bian, as alleged by Tiong. Road repair works are executed by the WPCs appointed for the respective sections and packages according to their terms of contract by LBU,” See said.

Although the Works Ministry under the Federal Government has issued termination notice to LBU for its services as Project Delivery Partner (PDP) on Sept 20, 2019 it will only take effect on February 20 this
year.

“The Works Ministry has consistently issued warnings to LBU on the matter of WPCs fulfilling their contractual responsibility for the safety of the people.

Additionally, the Works Minister has personally done spot-checks on several sites of the Pan Borneo Highway and has given stern warnings to
LBU for errant contractors to repair bad road conditions,” said See.

Thus WPCs can only be terminated by LBU in accordance with the binding appointment contract between LBU and the WPCs as the Works Ministry does not have the authority.

See added that the Works Ministry is unaware of any errant contractors having collected payments without delivery of work as payments to contractors are still managed by LBU at this point in time.

He stressed that road users’ safety is the highest priority of the Works Ministry.

Various mechanisms and policies have been put in place to enable roads which are under construction to remain open to ‘live’ traffic, particularly for travellers during festive seasons.

“Since 2016, the Works Ministry has implemented the Construction Industry Transformation Programme (CITP) which emphasises quality, safety and professionalism in construction works,” he said.

See said that the Sarawak Public Works Department is also closely monitoring the situation on the ground, especially on the time taken to complete repairs of pot-holes.

With the upcoming Chinese New Year festive season, he said that the government’s priority is to check on relevant contractors closing temporary as many road diversions as
possible and open more stretches of the first carriageway to traffic.

“We should also ensure speedy repairs to the damaged sections and pot-holes by having sufficient resources available during the peak traffic period; and pay extra attention to traffic management by ensuring ample road signage is in place,” he said.