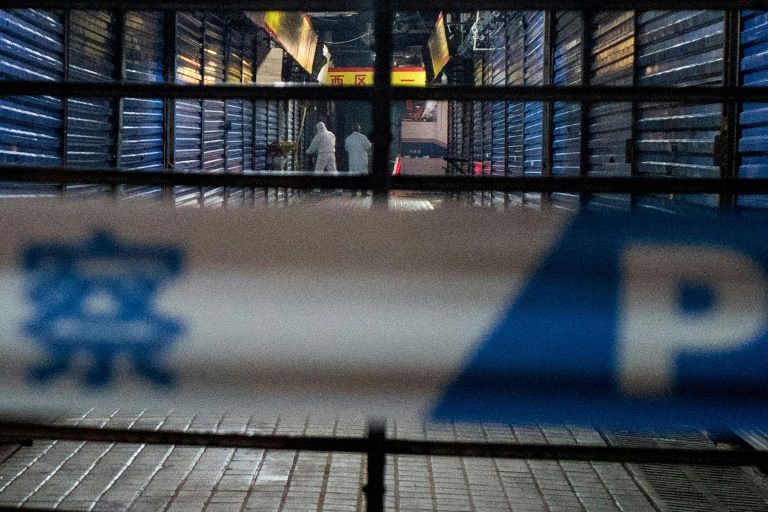 The Huanan Seafood Wholesale Market in the city of Wuhan is thought to be ground zero for the mystery virus that has now claimed two lives. AFP Photo

A second person has died in China from a mysterious SARS-linked virus that has stricken dozens and appeared in two other Asian countries, officials said.

Local authorities said a 69-year-old man died on Wednesday in Wuhan, the central Chinese city believed to be the epicentre of an outbreak of a coronavirus from the same family as the deadly SARS pathogen.

The outbreak has caused alarm because of the link with SARS (Severe Acute Respiratory Syndrome), which killed 349 people in mainland China and another 299 in Hong Kong in 2002-2003.

At least 41 people have been hit with pneumonia linked to the new virus in China, prompting authorities in Hong Kong to step up detection measures, including temperature checkpoints for inbound travellers.

The Wuhan health commission said 12 people have recovered and been discharged from hospital, while five others were in serious condition.

The man who died had become sick on December 31 and his condition worsened on January 4, with pulmonary tuberculosis and multiple organ functions damaged, the commission said.

Two other cases have been detected — in Thailand and Japan — with health managers in both countries saying the patients had visited Wuhan prior to their hospitalisations.

Authorities in Wuhan said a seafood market was the centre of the outbreak. It was closed on January 1.

No human-to-human transmission of the virus behind the Wuhan outbreak has been confirmed so far, but the health commission has said the possibility “cannot be excluded”.

A World Health Organization (WHO) doctor has said that it would not be surprising if there was “some limited human-to-human transmission, especially among families who have close contact with one another”.

The WHO said Thursday that “much remains to be understood about the new coronavirus”.

Not enough was known about it to “draw definitive conclusions about how it is transmitted,” a statement added.

The Wuhan health commission said one man who had been diagnosed worked at Huanan Seafood Wholesale Market, but his wife, who also had the virus, reported “no history of exposure” at the facility.

The woman diagnosed in Thailand had not reported visiting the seafood market, the WHO said on Tuesday. She was reported to be in stable condition earlier this week.

The patient in Japan, who was released from hospital, had also not visited the market. Japanese officials said it was possible that the man had been in contact with a person infected with the virus while in Wuhan.

The US Centers for Disease Control and Prevention has issued a Level 1 “Watch” alert for travellers to Wuhan, saying they should practise normal precautions and avoid contact with animals and sick people.

The increase in fatalities from the mysterious disease also comes as China prepares for its busiest travel season of the year, when millions of people take buses, trains and planes for Lunar New Year next week.

China has not announced any travel restrictions.

After the second death was reported, online discussion spread in China over the severity of the Wuhan coronavirus — and how much information the government is hiding from the public.

Several complained about censorship of online posts, while others made comparisons to 2003, when Beijing drew criticism from the WHO for under-reporting the number of SARS cases.

“Scarier than panic is treating something too lightly,” wrote a Chinese web-user on Weibo, the country’s Twitter-like social media platform.

“It’s so strange,” wrote another, citing the overseas cases in Japan and Thailand. “They all have Wuhan pneumonia cases but we don’t apart from Wuhan — is that scientific?” – AFP