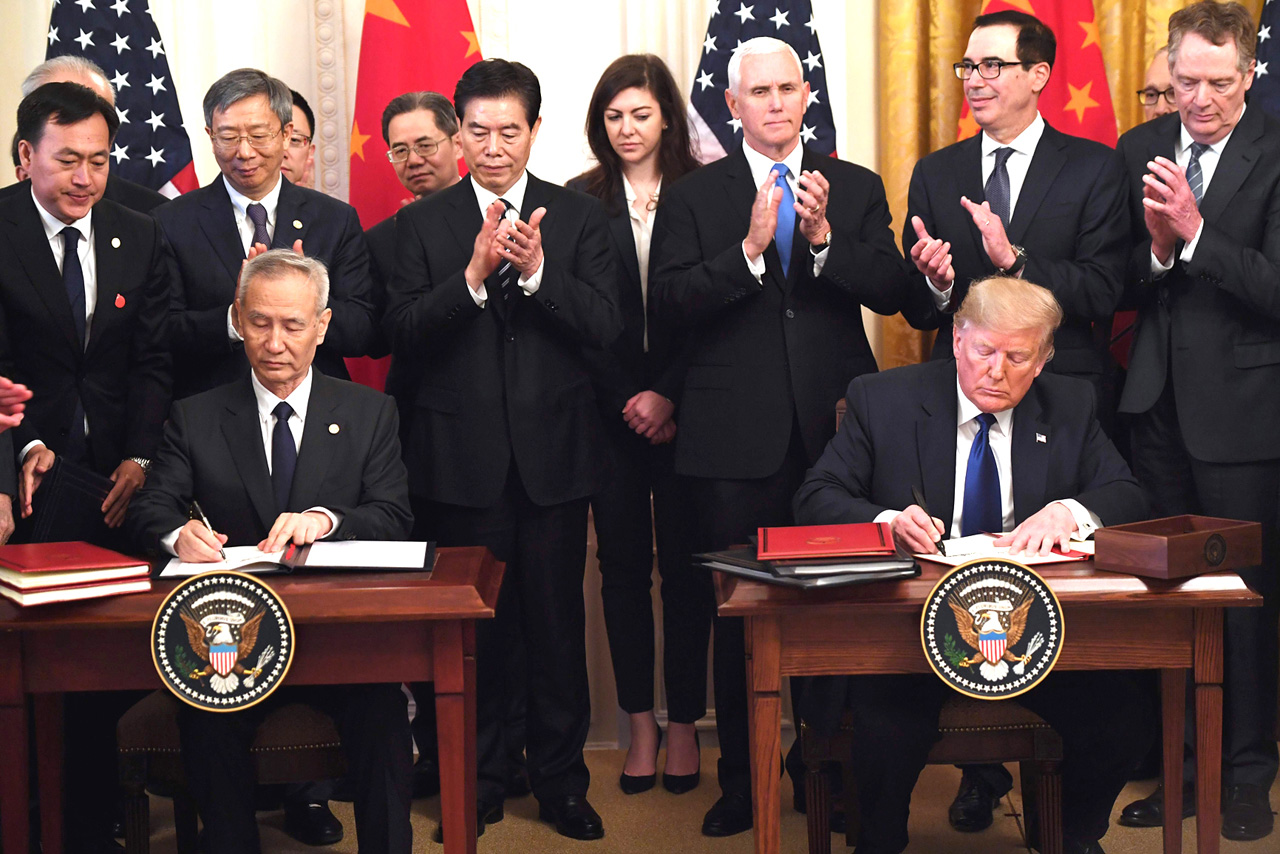 Liu and Trump sign a trade agreement between the US and China in the East Room of the White House in Washington, DC. — AFP photo

WASHINGTON: The United States and China signed a truce in their trade war on Wednesday after nearly two years of tensions, bringing relief to markets but largely leaving massive tariffs in place.

The ‘phase one’ deal is also a boon for Donald Trump as he faces an impeachment trial and a tough re-election fight this year, with the US president hailing the agreement as ‘momentous’.

However, with tariffs still in place on two-thirds of more than US$500 billion in imports from China, US consumers and businesses will be left to foot the bill.

The agreement includes pledges from China to beef up purchases of US agricultural goods and other exports for two years, provides some protections for US technology, and new enforcement mechanisms that allow Washington to quickly impose penalties that Beijing cannot respond to.

“Today, we take a momentous step, one that has never been taken before with China”, which will ensure ‘fair and reciprocal trade’, Trump said at the White House signing ceremony.

“Together, we are righting the wrongs of the past”.

But as Trump ambled through a lengthy commentary on the deal, major networks switched away from the White House to Congress where articles of impeachment were to be presented to the Senate as the first step towards a trial.

The easing of trade frictions has boosted stock markets worldwide in recent weeks, as it takes the threat of new tariffs off the table for now. On Wall Street, the Dow and S&P 500 ended at new record highs
after the signing, while Asian markets were mostly up in the afternoon.

Trump signed the deal with China’s vice-premier Liu He, who has led Beijing’s negotiations with US Trade Representative Robert Lighthizer and Treasury Secretary Steven Mnuchin.

The US president thanked Chinese leader Xi Jinping and said he would visit Beijing in “the not-too-distant future.”

“Negotiations were tough on us,” Trump said, but they led “to this really incredible breakthrough.”

But he said he will only remove the remaining tariffs “if we’re able to do phase two.”

In a letter to Trump read by Liu, the Chinese president said the deal is “good for China, for the US and for the whole world.”

“It also shows that our two countries have the ability to act on the basis of equality and mutual respect”, Xi said in the letter to his US counterpart, adding that he would ‘stay in close touch with you personally’.

At a later news briefing with Chinese media in Washington, Liu said the pact “considerably addressed the concerns of both sides,” according to the official Xinhua news agency.

The agreement “bears both economic and political significance,” he said.

Chinese state-run newspapers hailed the signing of the ‘hard-fought agreement’, but warned that it would ‘not take much to banjax the deal’ and bring tensions to a head again.

The American Chamber of Commerce in China said the signing of the deal represented ‘the start of a new chapter’ but warned “significant work remains to address longstanding, structural issues in the commercial and economic relationship.”

The most difficult issues remain to be dealt with in ‘phase two’ negotiations, including China’s massive subsidies for state industry.

And elements of the deal the administration has touted as achievements effectively take the relationship between the two powers back to where it was before Trump took office.

“A huge amount of this is a reset,” said Chad Bown, a trade expert with the Peterson Institute for International Economics.

“A lot of these elements are locking in things that were already there, or already in train before.”

The absence of any provision on China’s industrial subsidies leaves “a big, giant, gaping hole that has not been addressed,” Bown told reporters.

After announcing the deal on Dec 13, the US cancelled a damaging round of new tariffs that were due to kick in two days later and also promised to slash in half the 15 per cent tariffs on US$120 billion imposed Sept 1 on consumer goods like clothing.

That reduction will take effect in 30 days, when the deal enters into force, a senior administration official told reporters.

But Bown noted that the average US tariff on China over the course of the trade war has surged from three per cent at the beginning of 2018 to more than 19 per cent, even after the new deal.

The official said China has not made any specific commitments to cut tariffs it has imposed on US goods in retaliation.

Washington will be monitoring the purchases so China will have to make sure that “nothing with tariffs or non-tariff barriers prevent that from happening,” the official said.

Trump has repeatedly touted the trade pact as a win for American farmers, who were hit hard by the tariff war.

Soybean exports to China plunged to just US$3 billion from more than US$12 billion in 2017 and the Trump administration paid out US$28 billion in aid to farmers in the past two years. — AFP

Previous ArticlePM: Free breakfast programme only for poor students
Next Article Boost to grow customer base to 10 mln by year-end