Saturday, December 4
You are at:Home»News»Boost aims for 1 mln Sarawak users in 2 years 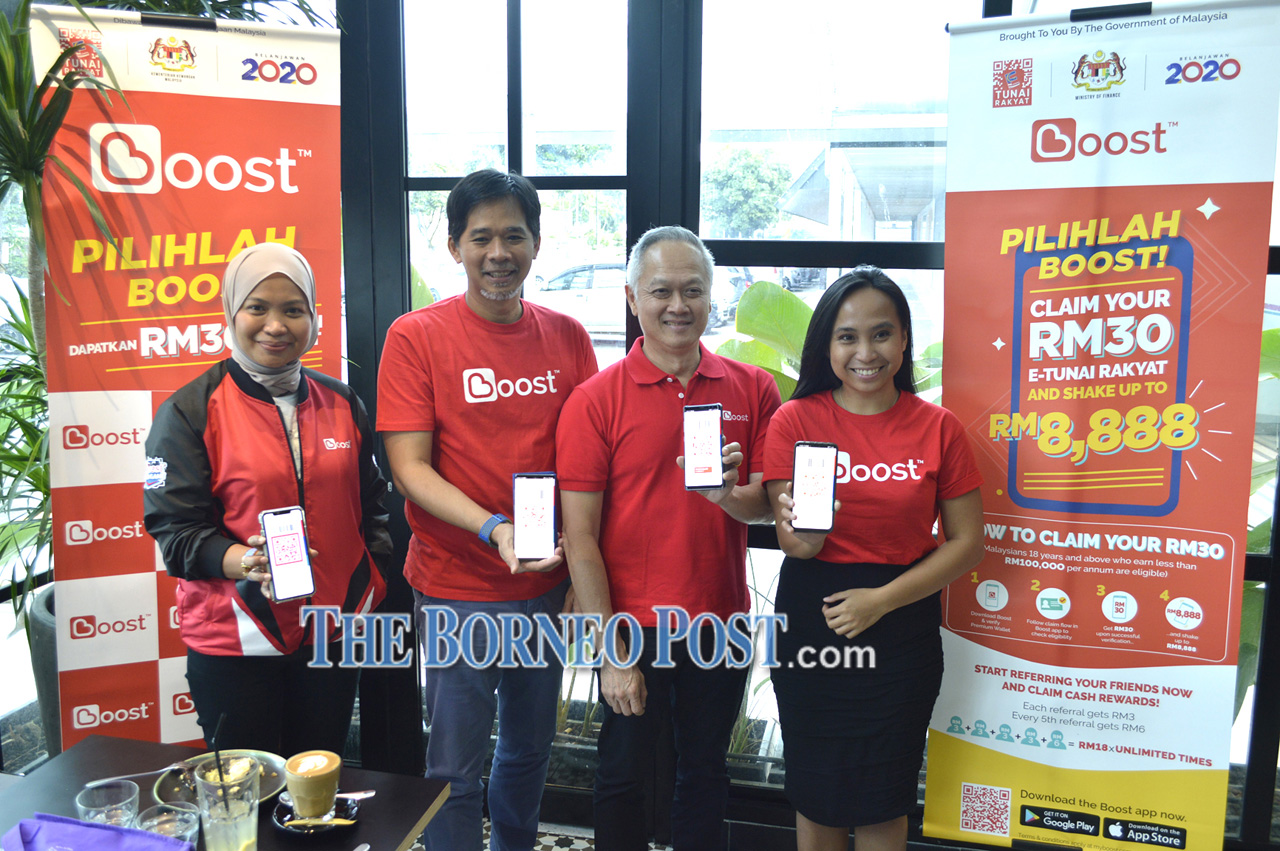 KUCHING: Homegrown lifestyle e-wallet, Boost, aims to expand its customer base in Sarawak to a million users within two years, aided by its on-going campaigns and the government’s e-Tunai Rakyat initiative which is expected to increase the adoption of e-wallet in Sarawak.

Boost chief executive officer Mohd Khairil Abdullah pointed out that since Boost was first launched in the state, Sarawak remains one of its most active states, second only to Sabah.

“We want to get to a point where all Sarawakians embrace Boost.

“We have 100,000 active users and on a three-year plan, we want to reach at least a million users within the next two years,” Khairil shared at a press conference before the launch of the e-Tunai Rakyat initiative by the Ministry of Finance.

Boost is one of the e-wallet channels through which Sarawakians can claim the RM30 e-Tunai Rakyat.

“We feel that Boost is for everyone, that’s why we came to Sarawak as soon as possible and the take up rate was great earlier on and until today, Sarawak remains the second most active state, with 53 per cent activity rate based on transactions generated by our partnered merchants here,” Khairil added.

He noted that on average, in Malaysia, the average transaction activity rate is at 26 per cent.

“There is still a lot of opportunities to grow in Sarawak,” Boost director of merchants Eric Chong said.

According to Chong, Boost aims to expand to every mall, food court, markets across Sarawak which Boost hoped could encourage the usage of Boost. With the e-Tunai Rakyat, he hoped there will be more new Boost users.

On the e-Tunai Rakyat programme, Khairil said the initiative has been very positive because it promotes digital inclusivity and encourages more Malaysians to adopt the cashless lifestyle.

“The e-Tunai Rakyat initiative will serve as a great starting point for those who have been curious about e-wallets to become new users and experience the convenience of going cashless,” he said.

“Through this e-Tunai Rakyat programme, the government is encouraging the usage of e-wallet, we are now seeing a lot of new users applying.”

e-Tunai Rakyat has a total allocation of RM450 million from the government and is expected to benefit 15 million Malaysians above the age of 18 earning an annual income of less than RM100,000.

Firstly, to give users more value on top of the RM30, all Boost users who submitted their claims, including those who are not eligible for e-Tunai Rakyat after JPN and LHDN eligibility checks, will get one surprise Shake Reward and a chance of winning of up to RM8,888.

“During the two-month e-Tunai Rakyat initiative, we will be offering endless ways for Malaysians to go cashless with Boost that caters to any lifestyle choice or need.

“Combined with our wide merchant footprint of over 135,000 merchants nationwide including in Sabah and Sarawak, as well as exclusive offers and benefits from our business partners, we are confident that it will be effortless, safe and rewarding for everyone to experience a cashless lifestyle with us,” Khairil added.

Many notable brands ranging from F&B to entertainment, fashion to retail have partnered with Boost to support the initiative and drive digital payments.

Alternatively, users can also choose to purchase attractive bundled deals from partners within the Boost app where they stand to save up to RM150.

Third, Boost will also be rewarding users who bring their friends and family onboard the cashless revolution. With a unique referral code, users can earn an additional RM18 in cash rewards for every five people they refer to Boost.

Each referral is worth RM3 with every fifth referral earning a user RM6. There is no limit to how many times a user can claim the referral cash reward.

Lastly, to usher in the Chinese New Year celebrations, users can also participate in the Boost Ang Pow Challenge.

Once the user has submitted their e-Tunai Rakyat claim, they will automatically receive two Ang Pows in the Boost app with a value of up to RM10 each.

The goal here is to continue playing the challenge. Users need to share at least one Ang Pow with another Boost user who isn’t currently playing the Ang Pow Challenge or a non-Boost user in order to continue receiving two Ang Pows daily.

By continuing to play the challenge, users can go on to collect a lot more in Ang Pow money cumulatively.