Thursday, April 9
You are at:Home»News»Boost rolls out offers for RM30 digital stimulus 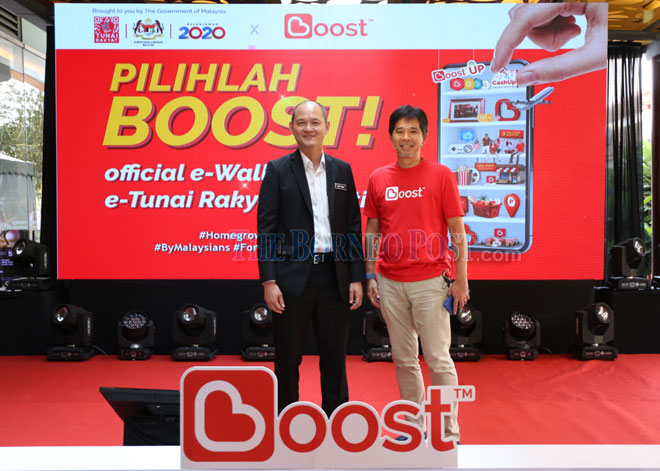 KUALA LUMPUR: Home-grown and leading lifestyle e-wallet Boost is rolling out exciting offers for users to enjoy with the RM30 digital stimulus.

“Combined with our wide merchant footprint of over 135,000 merchants nationwide including in Sabah and Sarawak, as well as exclusive offers and benefits from our business partners, we are confident that it will be effortless, safe and rewarding for everyone to experience a cashless lifestyle with us,” he said in a press release.

All Boost users who submitted claims, including those not eligible for e-Tunai Rakyat, will get a surprise Shake Reward and a chance of winning up to RM8,888.

There are numerous offers on in-app purchases, bill payments, movie tickets, or prepaid top-ups, among others, which offer savings of up to RM1,888.

Users can also choose to purchase attractive bundle deals from partners within the Boost app where they can save up to RM150.

Boost will also reward users who bring their friends and family on board the cashless revolution.

With a unique referral code, users can earn an additional RM18 in cash rewards for every five people they refer to Boost.

Each referral is worth RM3 with every fifth referral earning a user RM6.

There is no limit to how many times a user can claim the referral cash reward.

To usher in Chinese New Year, users can also participate in the Boost Ang Pow Challenge.

Once the user has submitted their e-Tunai Rakyat claim, they will automatically receive two Ang Pows in the Boost app with a value of up to RM10 each.

Users need to share at least one Ang Pow with another Boost user who is not currently playing the Ang Pow Challenge or a non-Boost user in order to continue receiving two Ang Pows daily.

By continuing to play the challenge, users can go on to collect more in Ang Pow money cumulatively.

Mohd Khairil said being an e-wallet that is built in Malaysia by Malaysians for Malaysians, Boost is proud and humbled to be selected by the Ministry of Finance to be one of the official e-wallets for the disbursement of e-Tunai Rakyat and contribute towards the country’s digital and cashless future.

“The e-Tunai Rakyat initiative will serve as a great starting point for those who have been curious about e-wallets to become new users and experience the convenience of going cashless.

“We believe that 2020 is the year to go cashless and we intend to play a big role to assist in driving the government’s cashless agenda,” he said.

To claim the one-time RM30 e-Tunai Rakyat with Boost, users need to verify their accounts as described in the Boost app by taking pictures of their identification card and a selfie.

Once verification is complete, they need to tap on the submit claim button to check for eligibility after which the user will be notified within five working days.

The eligibility check will be performed by both the National Registration Department (JPN) and Inland Revenue Board (LHDN).

Upon successful verification and eligibility check, the RM30 will automatically be credited into the Boost e-wallet and is ready to be used.

The RM30 e-Tunai Rakyat can only be claimed once by each user from one e-wallet of their choice.

It can be used to spend on local products and services where Boost is an accepted payment option.

The amount cannot be transferred to other individuals via peer-to-peer (P2P) transfer or cashed out into the user’s bank account.

Upon spending the RM30, the P2P & Transfer to Bank Account functions will resume immediately.

Any unused balance will expire and be removed from the user’s e-wallet account.

Boost is available for download on both the Google Play Store and Apple’s App Store.