Tuesday, October 19
You are at:Home»News»Nation»Media council on the road to fruition 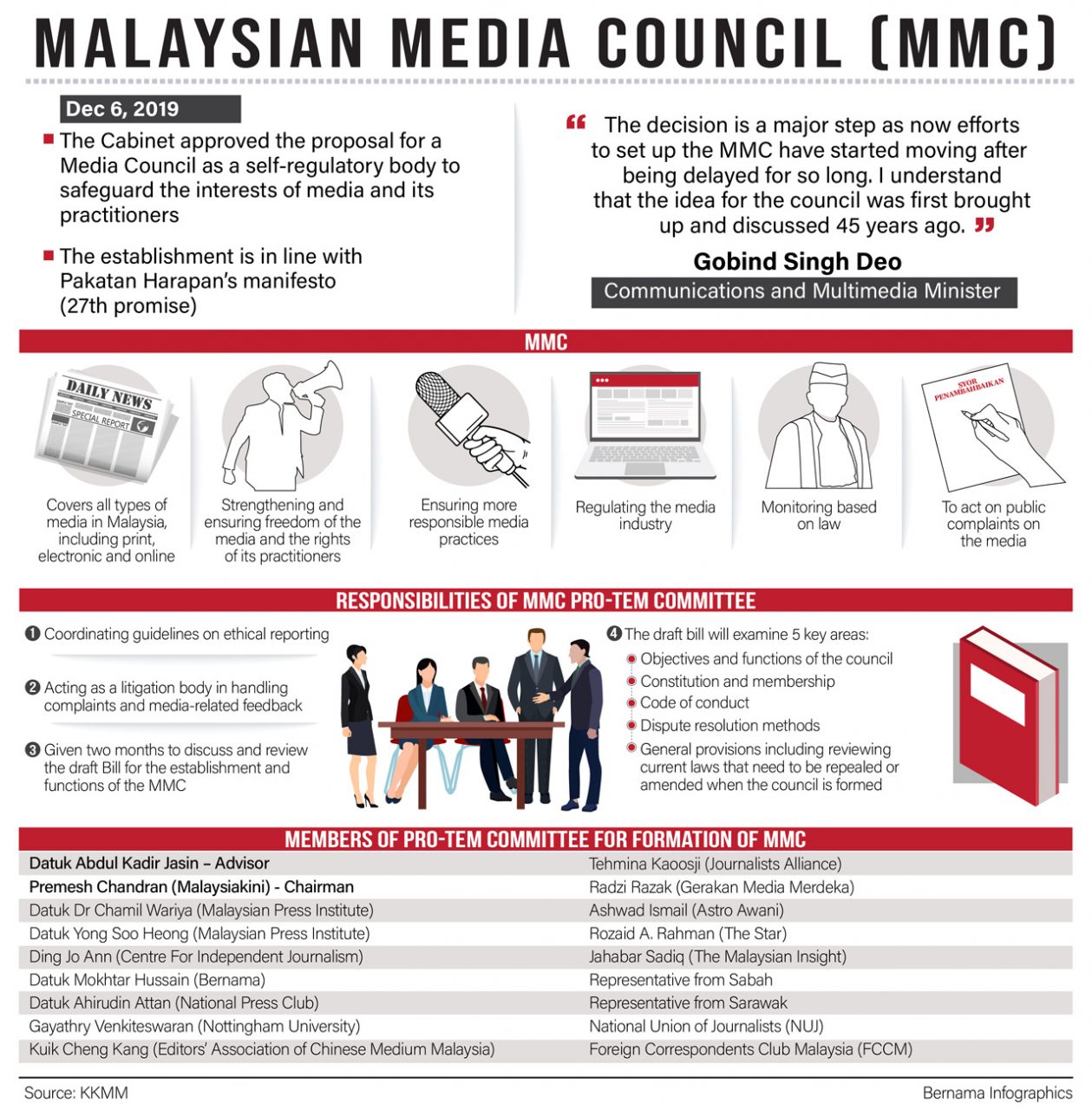 KUALA LUMPUR: At last, the Malaysian Media Council is on the road to realisation.

The idea of having the self-regulatory body, mooted almost five decades ago, in 1973, began to take shape here yesterday with the setting up of a 17-member
pro tem committee at a meeting of leading media practitioners.

The representatives at the meeting proposed names from among themselves to make up the committee, picking Malaysiakini chief executive officer Premesh Chandran to be the chairman.

Veteran journalist Datuk A Kadir Jasin, who has been a key advocate of a media council, is the advisor.

Members of the committee include veterans of the media fraternity from the print, electronic and online media, local and foreign media, journalists associations and non-governmental organisations (NGOs).

The committee has given itself two months to come up with proposals for a bill to formalise the formation of the council by way of an act of parliament.

It will also look into its objectives and functions; constitution and membership; code of ethics; ways of resolving conflicts; and general provisions, as well as determine the need to amend or abolish existing laws when the council is formed.

Kadir said the committee would have to look into some existing laws because the council could not guarantee media freedom when certain laws, such as the Printing Presses and Publications Act, had not been amended or abolished.

“The media is not just subject to acts aimed at it, but also to many other laws and regulations, which concern all the people and have a big impact on the media, such as the Sedition Act 1948 and the Official Secrets Act 1972,” he said.

The Malaysian Media Council would also function as an ombudsman with regard to public complaints against errant members. It would promote and regulate media ethics, uphold professionalism through standards setting and promote and uphold media freedom.

The formation of the pro tem committee fulfills a promise of the Pakatan Harapan (PH) in its manifesto for the 14th general election held in May 2018 to facilitate the setting up of a media council.

The government, however, has pledged non-interference in the council. It facilitated yesterday’s meeting merely to set the ball rolling.

No government representative was in the list of the pro tem committee that Communications and Multimedia Minister Gobind Singh Deo announced after the meeting. The committee also had one representative each from Sabah and Sarawak, reflecting that the council would also take responsibility for all journalists in the country.

The committee also concurred that state-owned media entities such as Radio Televisyen Malaysia (RTM) and Bernama, the Malaysian National News Agency, should also be represented in the council.

Kadir said the Indonesian Press Council was an excellent model as it had been tested and had been performing well.

The Indonesian Press Council, or Dewan Pers, is made up of journalists, media managers, community representatives and media experts. Its purpose is to foster freedom of the press and improve the national press.

It is formally independent of the state and is not subject to any direct government supervision.

Kadir said the reason for setting up the Malaysian Media Council was to improve the level of journalism and the media, maintain or increase public faith in the mass media, and to resolve disputes between the media and society.

Besides Indonesia, countries such as Australia and South Africa had proven that a media council could also be an important intermediary between the public and professional journalists.

“It has not been an easy journey and there is still a lot of work to do. We should see something concrete later in the year which the local media industry can be proud of,” said the Malaysian Press Institute (MPI) trustee and a former general manager of Bernama.

Kepong MP Lim Lip Eng, in a statement yesterday, welcomed the setting up of the pro tem committee as a historic milestone for the media fraternity in terms of promoting greater press freedom as the media council will boost the confidence of the people towards the local media.

“Much has been done to repair our press freedom. With greater freedom comes greater responsibility and I am sure the media council will be able to regulate journalists to further enhance their professionalism in writing articles that seek to inform the public,” he said.

He also expressed the hope that the media council would be able to steer the younger generation of journalists to write as professionals with solutions to offer to the government.

Kadir said the pro-tem committee has been set up and ‘we will have something to show at the end of this year’.

“The media council, directly and indirectly, will help bring back the faith of the people in the media, especially in the mainstream media,” he said. — Bernama

Previous ArticleLatheefa ready to assist police probe into criminal plot against her, MACC
Next Article Boost aims for 1 mln Sarawak users in 2 years