Saturday, August 20
You are at:Home»News»Fatimah: 8,505 application forms for Kenyalang Gold Card received as of Jan 21 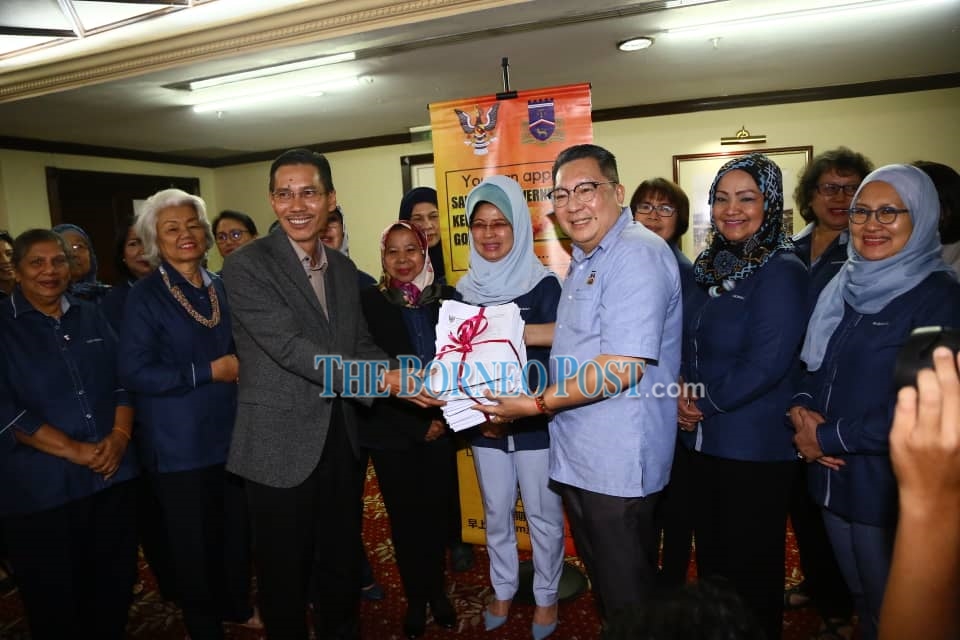 Wee (right) handing over the KGC application forms to Joni (left) during the press conference, which was witnessed by Fatimah (centre) today. – Photo by Muhammad Rais Sanusi

KUCHING: A total of 8,505 applications forms for the Kenyalang Gold Card (KGC) have been received by the state Social Welfare Department (JKMS) as of Jan 21, this year, revealed Minister of Welfare, Community Welfare, Women, Family and Children’s Development Dato Sri Fatimah Abdullah.

“We thus would like to thank our volunteers from non-governmental organisations, political parties and government agencies for helping senior citizens to apply for the KGC,” she said during a press conference after chairing the Sarawak Women’s and Family Council Meeting at a hotel here today

She also thanked the Kuching South City Council (MBKS) for helping residents in KMC flats, as well as eligible residents in their area of ​​administration to complete their application forms for KGC.

While she appreciates the efforts by the NGOs or anyone who want to help the elderly to apply for the KGC by opening counters in certain locations, Fatimah advised them to notify her ministry or JKMNS first to avoid any problems.

“Applications can be made now despite the official launch of the KGC on March 7 at the Borneo Convention Center Kuching (BCCK) by Chief Minister Datuk Patinggi Abang Johari Tun Openg during the Global Innovative Entrepreneur Symposium,” she said.

Fatimah disclosed that 31 vendors have confirmed their participation in the KGC so far, compared to 24 previously.

“We welcome strategic partners to offer discounts or rebates and services to KGC holders and we do hope this number will increase over time,” she said.

Wee said that MBKS would open several counters at their One Stop Centre in the MBKS building lobby daily from 8.30am to 4.30pm as well as at several strategic locations in the area to help senior citizens to apply for the KGC.