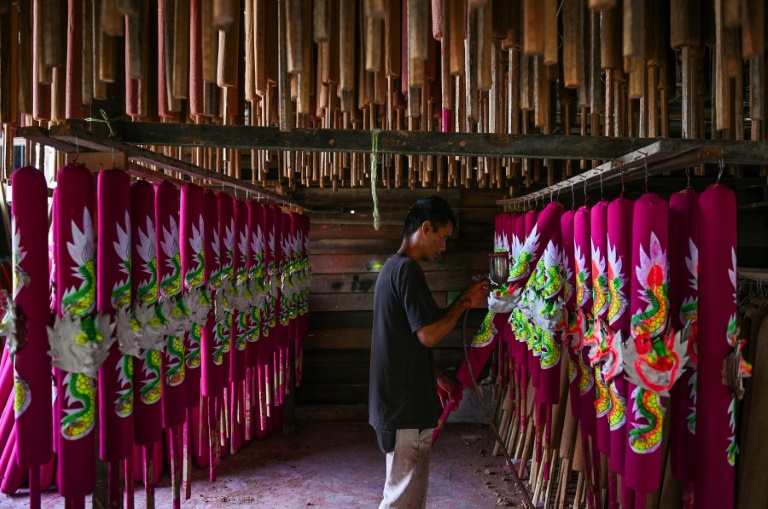 Workers spend months using a traditional method to craft the sticks — some as tall as two metres (6.5 feet). – AFP photo

Thousands of giant incense sticks, many decorated with dragon heads, line the walls at a Malaysian business where they are made by hand ahead of the Lunar New Year holiday.

In the rural town of Kubang Semang, workers spend months using a traditional method to craft the sticks — some as tall as two metres (6.5 feet) — before sending them to stores.

Business is brisk ahead of Lunar New Year celebrations towards the end of this month, when people of Chinese descent worldwide burn incense in temples and at traditional ceremonies.

Malaysia is a Muslim-majority country but is home to a substantial ethnic Chinese population, and the holiday is marked in many places.

Ong Chin Chye, who runs the business in a series of wood and corrugated iron buildings, said his colourful hand-made sticks look a lot better than those churned out by machines.

“With machines, can you make the dragon head like this?” the 60-year-old asked AFP, pointing to his intricately carved creations.

Ong’s sticks are primarily made from sawdust, using a mix of locally-grown “meranti” timber — a common hardwood in Southeast Asia — and aromatic agarwood. These are combined with water to make a sticky paste that forms the sticks.

The next 12 months will be the Year of the Rat — the first creature in the Chinese zodiac’s 12-year cycle — but Ong said his buyers weren’t keen on depictions of the whiskered rodent.

“People don’t want rats. They steal food, and that’s not good,” he laughed.

On the other hand, dragons — also one of the zodiac animals — are ever-popular symbols of power, strength and good luck in Asian culture.

Ong said his sticks typically sell for between eight and 80 ringgit ($2 to $20) apiece, depending on quality and size. As well as Lunar New Year, he makes them for other major Chinese festivities.

He estimated there were at most 30 incense-making businesses like his across Malaysia, adding the industry had been declining in recent years.

Young people “don’t want to work these jobs, it’s hard work… there is no air-conditioning”, he said.

More than 60 percent of Malaysia’s 32 million people are ethnic Malay Muslims while around a quarter are ethnic Chinese, and the country is also home to a sizeable minority of people of Indian descent. – AFP