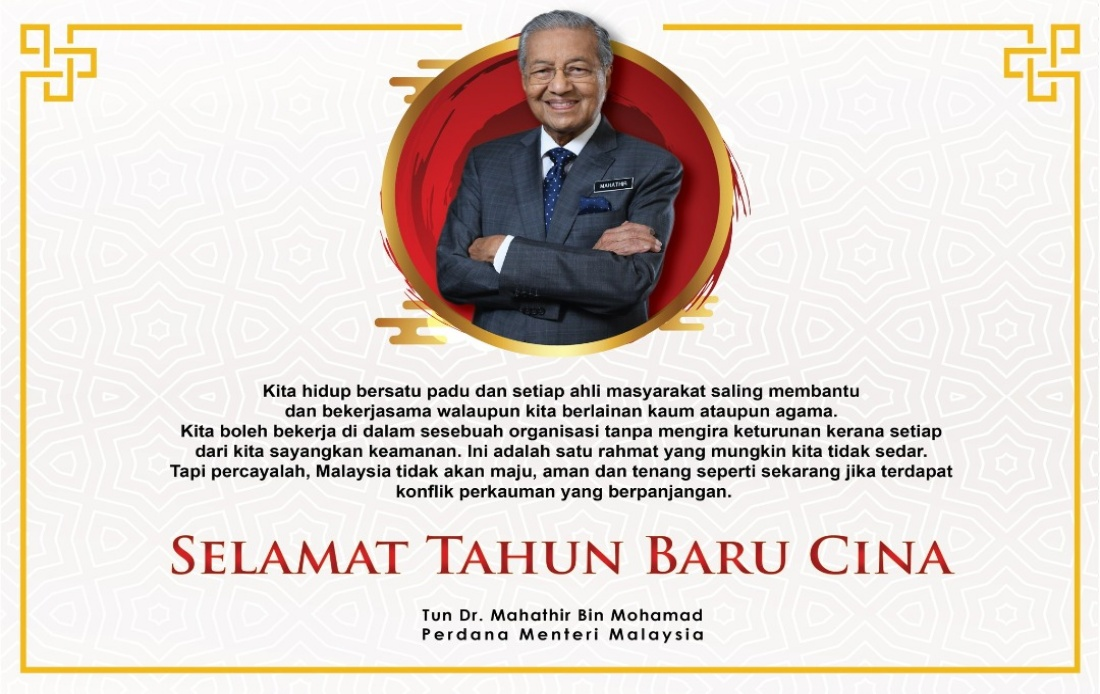 KUALA LUMPUR: Malaysians should not let petty issues be the cause for them to hate each other but instead should strive to strengthen multiracial ties in the country, said Tun Dr Mahathir Mohamad.

In fact, the Prime Minister said the people should be wary of instigators with an ill intention of causing racial disharmony in Malaysia.

“If we became irrational and started to hate each other just because of some petty issues, these instigators will think that they have won,” he said in his message in conjunction with the Chinese New Year 2020 celebration.

Dr Mahathir said he believed that Malaysia’s strength lies on the maturity of the people who will not be easily fooled by the instigators.

He said, for decades, Malaysians have accepted the fact that Malaysia is a multi-racial country that needs them to tolerate each other to live in peace and harmony.

“So, we must not let the country be destroyed by racial hatred,” he said.

Dr Mahathir said Malaysians had stayed united, helped each other and even worked closely together regardless of their race, religion and background, because of their love for this peaceful and harmonious country.

“This is a blessing that we might have not realised. But believe me, Malaysia will not advance or remain peaceful and harmony as it is today if there were unsolved and prolonged racial conflicts,” he said.

The Prime Minister also said that the government has plans to strengthen the country’s economy but it needs time and requires the people to the patient, especially the private sector.

Dr Mahathir noted that Malaysia’s economic growth this year, projected to be between 4.3 and 4.8 per cent, is still encouraging, and is among the countries with higher growth rates compared to any other Asian country.

“We know our country’s economy is small, but this encouraging growth is proof that our people can work together to boost Malaysia’s development.

“When the country is stable and the people have good skills to work, local and foreign investors will be attracted to invest in Malaysia,” he said.

Dr Mahathir said the government had also approved investments totalling RM149 billion for the first nine months of 2019, a relatively bigger amount compared to that approved in the corresponding period of the previous year.

“This is because the government is more active in luring investors to Malaysia,” he said, adding that this had inadvertently created many job opportunities for Malaysians.

At the end of the message, Dr Mahathir and his wife Tun Dr Siti Hasmah Mohd Ali also wished the Malaysian Chinese community ‘Gong Xi Fa Cai’ and urged all Malaysians to continue with the tradition of visiting the homes of their friends in conjunction with the Chinese New Year. – Bernama